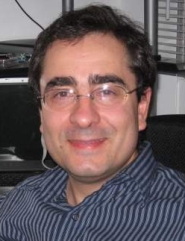 Nicola Scafetta is a research scientist at Duke University Physics Department. He is known for proposing a phenomenological theory of climate change, claiming that oscillations induced by solar changes and other astronomical influences can affect climate.

According to his theory, which he presented to the EPA in a presentation titled “Climate Change and its Causes, a Discussion about some Key Issues,” we would be facing an imminent cooling period. [2]

However, Scafetta’s theory has been disputed by other scientists. [3]

“At least 60% of the warming of the Earth observed since 1970 appears to be induced by natural cycles which are present in the solar system.” [4]

During his talk at the 12th conference of the European Institute for Climate and Energy (EIKE), also billed as the Heartland Institute‘s 13th International Conference on Climate Change (ICCC13), Scafetta declared: [13]

“The climate models cannot be considered validated and therefore cannot be used to do prediction of the future.”

“If climate is as sensitive to solar changes as the above phenomenological findings suggest, the current anthropogenic contribution to global warming is significantly overestimated.” [5]

Scafetta was listed on the program for the 12th conference of the European Institute for Climate and Energy (EIKE), also billed as the Heartland Institute‘s 13th International Conference on Climate Change (ICCC13). According to a translation of the agenda, he spoke on “Advances in Understanding Natural Climate Change” on November 24. [13]

“Essentially the climate system is a very complex, there is one part of anthropogenic forcing. It is a very, very weaker, much weaker than what the IPCC claims, at least half,” Scafetta claimed in his talk.

“There is some volcano activity, so there is, some internal variability, but essentially there is also a dynamic component, a harmonic component which is regulated by astronomical forcing. And so this forcing is driven by the movement of the planets around the sun that creates some set of stable resonance that will synchronize the solar and climate activity.”

Nicola Scafetta is listed as a contributor to Climate Change: The Facts 2017, a book released by the Institute for Public Affairs (IPA) and edited by Jennifer Marohasy. While investigating the authors, DeSmog noted that one of the IPA‘s listed “leading experts” involved in the book is New Zealand’s Ken Ring, who in addition to being a described “long range weather forecaster” has written “two, possibly three, books about cats” including Pawmistry: How to Read Your Cat’s Paws in 1998.  [10]

According to the book description: [11]

There are also essays by Matt Ridley, and Bjørn Lomborg on the economics of climate change, and by Simon Breheny on how the freedom to discuss climate change science is under threat.” [11]

Prior versions of the book featured contributions from a range of prominent climate change deniers, and describes mainstream climate change research as “pseudo-science.” [12]

Scafetta was a speaker at the Heartland Institute’s Sixth International Conference on Climate Change.  [6]

Nicola Scafetta was one of fourteen Amici, described as “well-qualified climate scientists,” who claimed that the “EPA‘s endangerment finding is not ‘rational’ and therefore arbitrary and capricious.” [9]

According to the petitioners, representing the Coalition for Responsible Regulation, Inc.: [9]

“[T]he Earth’s climate is not changing in an unusual or anomalous fashion. The EPA relied on instrumental data that were adjusted to exaggerate the increase in global temperatures.” [9]

In his presentation, Scafetta suggests that “a significant portion of climate change is natural and linked to changes of solar activity.”and also discusses “the possibility of an imminent global cooling.” [2]

His findings have circulated through the skeptical science community, and on skeptical blogs such as WUWT (Watts Up With That).

Scafetta was the co-author of “Phenomenological solar signature in 400 years of reconstructed Northern Hemisphere temperature,” a paper widely quoted by climate skeptics.

Many researchers (PDF) in the field have viewed Scafetta’s claims as being incorrect, and his papers have also been debunked by scientists at RealClimate. [7]

It appears that Scafetta refused to release the code  to the software he used in this study. This meant that his results could not be replicated by climate scientists. [8]

May of Scafetta’s skeptical opinion articles and publications were published by organizations known for doubting the existence of climate change (including the Heartland Institute, and the Science and Public Policy Institute).