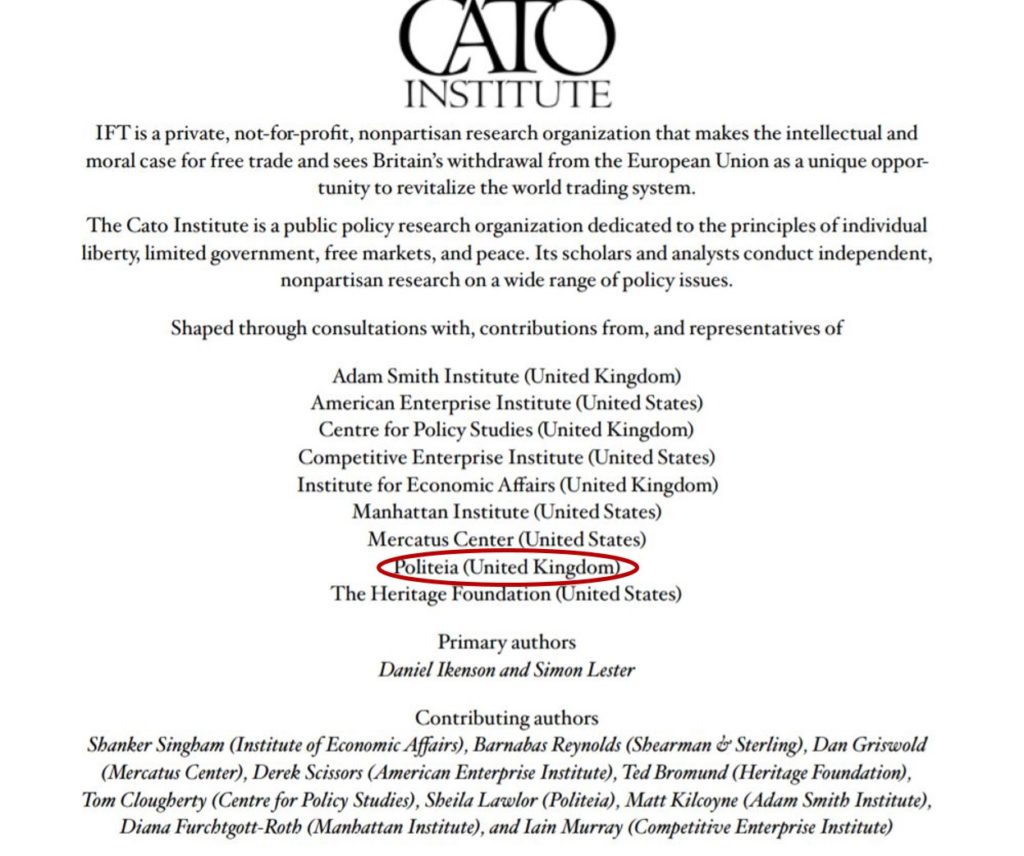 Politeia is a free-market organisation established in 1995 that aims to act as “a forum for discussing economic, constitutional and social policy,” according to its website. [1]

It was listed as one of the organisations consulted prior to the publication of an “ideal” post-Brexit US–UK trade deal by a group of free market think tanks and campaign groups led by the Cato Institute and Institute for Free Trade (IFT). [2]

David Howell, former Secretary of State for Energy under Margaret Thatcher, wrote a report on the EU’s energy policy for Politeia in 2014. In it, he wrote: [3]

“Revolutionary changes in energy production and new climate questions have made redundant the EU’s energy and climate goals, to Europe’s severe disadvantage.”

“The energy and climate policy of the EU has all along been dogmatically opposed to coal, gas and oil (until overwhelmed by facts to the contrary).”

In the report, he also described the “the climate policy-makers of Brussels” as “zealots.”

Hedge fund manager Robinson is listed on Politeia’s website as its patron. He has donated over £400,000 to Conservative party and Tory politicians. He also gave £5,000 to Boris Johnson’s London mayoral campaign. He gave £10,000 to the No Campaign, which campaigned against electoral reform in the UK in 2011. Matthew Elliott – now of the Legatum Institute and Brexit Central, and formerly chief executive of the Vote Leave campaign – was Board Director of the No Campaign. [4], [5], [6]

Lal sits on the Academic Advisory Board of the UK climate science denial campaign group, the Global Warming Policy Foundation. He is a senior fellow at the Cato Institute, a libertarian think tank in the US with links to major climate science denier funder Charles Koch. He was also described as co-director of the Institute of Economic Affairs‘ “Trade and Development Unit.” IEA is a UK think-tank with strong affiliations to the Brexit campaign. [7], [8], [9]

Lal is or was also a member of the Mont Pelerin Society, created in 1947 by the free market economist and philosopher Friedrich von Hayek and advocates “classical liberalism,” an ideology classified by small government and minimal regulation of business. Many groups associated with the Mont Pelerin Society have ties to climate science denial, DeSmogBlog reported. [10], [11]

Cable was elected leader of the Liberal Democrats in 2017. He is listed as being part of Politiea’s Westminster Advisory Council despite being staunchly pro-EU. Environment Secretary Michael Gove, who sits at the heart of a web of lobbyists and think tanks working out of offices on Tufton Street and pushing disinformation on climate change while advocating a hard-Brexit, is also listed as an advisor. Former Labour MP and arch-Brexiteer Frank Field, who resigned from the party after voting against the whip to support the Conservative government’s Brexit agenda, is also on the Advisory Council. [12], [4]

Politeia was listed as one of the organisations consulted prior to the publication of an “ideal” post-Brexit US–UK trade deal by a group of free market think tanks and campaign groups led by the Cato Institute and Institute for Free Trade. Other groups consulted included many residents of offices on Tufton Street, which act as the heart of a network of organisations pushing disinformation on climate change and for a hard Brexit.  [2]

According to Companies House records, Politeia has the following registered office address: [13]