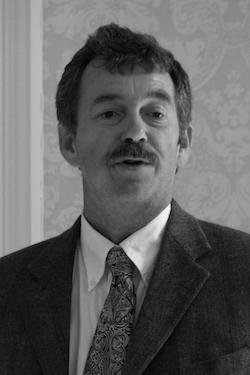 R. Timothy Patterson is a professor of geology at Carleton University. Patterson is also past chairman of the International Climate Science Coalition (ICSC), a group whose mission is “moving the debate away from implementation of costly and ineffectual ‘climate control’ measures.” [1], [2]

The ICSC, directed by Tom Harris (formerly of the High Park Group, a “public affairs firm”), has described itself as “an apolitical association of independent scientists, economists and energy and policy experts who have joined together to promote better public understanding of climate science and policy worldwide.” [17]

Timothy Patterson appears on a list compiled by Senator James Inhofe of those who are supposedly “prominent climate scientists.” Patterson is one of 84 scientists listed who have also taken industry money. In the past, Senator Inhofe has received significant amounts in donations from the oil and gas sector. [18], [19]

In an interview with 21st Century Science & Technology, Patterson admitted that while “it’s not really my area of research,” he began to think about the influence of carbon dioxide after reading work by climate change deniers Jan Veizer and Nir Shaviv. [29]

“And this is again due very heavily to Jan Veizer at the University of Ottawa […] And this is where the work he did with Shaviv came in, and they found that there was no statistical correlation between CO2 and climate. And in my research, I didn’t really see any CO2 impact at all; there was nothing changing in more recent times that didn’t correlate well with the sunspot cycle. So, that’s how I got where I am.” [29]

“[C]hanges in the output of the sun caused the most recent climate change. By comparison, CO2 variations show little correlation with our planet’s climate on long, medium and even short time scales.” [3]

Patterson testified before the House of Commons Standing Committee on Environment and Sustainable Development:

“Based on the paleoclimatic data I and others have collected, it’s obvious that climate is and always has been variable. In fact, the only constant about climate is change; it changes continually. We certainly have no chance of stopping this natural phenomenon.” [31]

Patterson went on City TV to discuss his views on climate change. According to Patterson, who said he teaches a “climate change” class at Carleton University: [32]

Patterson delivered the following remarks at a “Risk: Regulation and Reality Conference” hosted by Tech Central Station in Toronto, ON.

“I am a Quaternary geologist by profession. That is to say that my research interests are focused primarily on about the last 2 million years of Earth’s history. An important aspect of my research is assessing past climate conditions. Thus I am also a paleoclimatologist. […]

“I teach a general climate change course. To get the significance of this correlation over to the students I use the following analogy. I tell the students that based on these records if you believe that climate is being driven by CO2 then they probably would have no difficulty in accepting the idea that Winston Churchill was instrumental in the defeat of King Herold by Duke William of Orange at the Battle of Hastings in 1066. If you can believe that this historical temporal incongruity could be feasible then you can have no problem believing that CO2 is what’s driving Earth’s climate system.” [4]

In January 2018, more than 200 scientists endorsed an open letter calling on the American Museum of Natural History (AMNH) to remove climate change denier Rebekah Mercer from its board and to “end ties to anti-science propagandists and funders of climate science misinformation.” The New York Times reported that those among the AMNH letter calling for Mercer to step down were Michael E. Mann, director of the Earth System Science Center at Pennsylvania State University, and Katharine Hayhoe, director of the Climate Science Center at Texas Tech University. [37]

Patterson was among a group of climate change deniers who responded with their own open letter, calling for the AMNH “not to cave in to this pressure.” The letter was signed by numerous individuals with ties to groups funded by the Mercer Family Foundation such as Will Happer of the CO2 CoalitionRichard Lindzen, a fellow at the Cato InstituteCraig Idso, the chairman of the Center for the Study of Carbon Dioxide and Global Change. There are a number of signatories affiliated with the Heartland Institute, which has received over $5.78 million from the Mercer Family Foundation since 2008. [38]

Patterson and Tom Harris were guests on “Late Night Counsel” with CRFA Radio in Ottawa, Canada.

Patterson was a speaker at the Heartland Institute‘s 2010 Fourth International Conference on Climate Change (ICCC4) in Chicago. DeSmogBlog found that the sponsors of the conference have received a total of over $40 million in funding since 1985 from ExxonMobil, and/or Koch Industries family foundations and/or the Scaife family foundations. [35], [36]

His speech, titled “Stable Isotope Analysis of Peat Bog Sphagnum Moss to Track Holocene Paleoclimate” can be viewed below.

Patterson was a featured speaker at the at the Heartland Institute‘s 2009 Second International Conference on Climate Change (ICCC2.) [5]

DeSmogBlog found that the sponsors of the 2009 International Conference on Climate Change, which included the ICSC, have received over $47 million USD from organizations connected to the oil and gas industry. [20]

His speech, titled “Gleissberg Cycle: Pacemaker for the Pacific Decadal Oscillation?” can be viewed below.

Patterson sent a letter to the editor of The Ottawa Citizen, defending the teaching of climate change denial in classrooms: [30]

“There is an intense debate in the climate science community about the causes of the past century’s modest warming, and more recently, the reasons for our observation that there has been no warming in the first decade of the 21st century,” Patterson wrote. “To say that the debate is settled, as David Suzuki and Al Gore maintain, is ridiculous. New discoveries and theories about climate are put forth all the time and it is crucially important that no one, school children included, be under the impression that this rapidly evolving field is somehow stagnant, with little left to be discovered. […] Rather than damping their enthusiasm for science by misleading them into thinking that scientific debate is something of the past in this field, we need to inspire them to join us in this exciting scientific adventure – the unraveling of the Earth’s massively complex climate system, easily the most challenging problem in the history of science.” [30]

Patterson was a speaker at Heartland Institute‘s first International Conference on Climate Change in New York (ICCC1). His speech, titled “Cosmoclimatological Forcing as a Possible Driver of Holocene Climate and Marine Productivity in the Northeast Pacific” can be viewed below. [34]

Patterson signed the ICSC‘s 2008 Manhattan Declaration on Climate Change which was first presented for consideration at the Heartland Institute‘s 2008 International Conference on Climate Change. [6]

He is listed by the ICSC as a “climate expert” who signed the declaration, and also as an individual who was present at the 2008 International Conference on Climate Change when he signed. [23], [24]

Those who sign the declaration must agree that “attempts by governments to legislate costly regulations on industry and individual citizens to encourage CO2 reduction will slow development while having no appreciable impact on the future trajectory of global climate change.” [25]

More importantly, they must agree that “’global warming’ is not a global crisis.” [25]

The letter states that “it is not possible to stop climate change, a natural phenomenon that has affected humanity throughout the ages.” [7]

Patterson spoke at the 2007 “Eco-Symposium” in Alexandria, Ontario. Video below. [33]

Patterson was one of 60 “accredited experts” to sign a 2006 open letter to Prime Minister Stephen Harper that denied the existence of man-made climate change while urging the government avoid implementing climate policy. [26]

The letter states that “climate changes all the time due to natural causes and the human impact still remains impossible to distinguish from this natural ‘noise.’” [26]

Tim Patterson was featured in a 2005 video by the Friends of Science (FoS) titled Climate Catastrophe Cancelled. Ross McKitrick is featured on the video as well as other prominent climate change including Tim Ball, Sallie L. Baliunas and Tim Patterson. [27]

The FoS video is describes that climate science is “quickly diverging away from the hypothesis that the human release of greenhouse gases, specifically carbon dioxide, is having a significant impact on global climate.” [27]

The video features the infamous Dr. Tim Ball, who states in the video that “There is absolutely no convincing scientific evidence that human-produced greenhouse gases are driving global climate change,” and that “Carbon dioxide is a staff of life, plain and simple. It makes up less than 4% of greenhouse gases and it is not a toxic [sic].” [27]

According to SourceWatch, the recovered costs by FoS from the University of Calgary for “video production” in 2005 amounted to $80,731. [28]

Patterson is also listed as a “advisory board member” of the “Friends of Science” (FOS). [8]

In an August, 2006 Globe and Mail feature, the FOS was exposed as being funded in part by the oil and gas sector and hiding the fact that they were. According to the Globe and Mail, the oil industry money was funneled through the Calgary Foundation charity, to the University of Calgary and then put into an education trust for the FOS. [9]

In a January 28, 2007 article in the Toronto Star, the President of the FOS admitted that about one-third of the funding for the FoS is provided by the oil industry. [10]

The letter concludes that any past warming that occurred in the arctic cannot be attributed to greenhouse gas concentrations:

“Arctic climate has and will continue to exhibit intricate patterns not reliably reproduced by global climate simulations, thus underscoring their scientific incompleteness and need for advances in Arctic climate science, in measurements, theory and models.” [11]

Patterson spoke at a conference co-hosted by Tech Central Station titled “Risk: Regulation and Reality.” He describes himself as a quaternary geologist by profession, but goes on to say “I am also a paleoclimatologist” because of his research “assessing past climate conditions.” [4]

In his conclusion, Patterson states that “the geologic record clearly shows us that there really is little correlation between CO2 levels and temperature. Although CO2 can have a minor influence on global temperature the effect is minimal and short lived as this cycle sits on top of the much larger water cycle, which is what truly controls global temperatures. The water cycle is in turn primarily influenced by natural celestial cycles and trends.” [4]

According to a search of 22,000 academic journals, Patterson over 80 research articles in peer-reviewed journals.

A list of his publications is available at Carleton University.