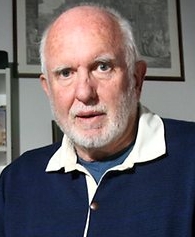 Ray Evans passed away on June 17, 2014. [8] Evans is a former office-holder and co-founder of numerous Australian front groups and right wing think-tanks. He is past President of the HR Nicholls Society, past Secretary of the Bennelong Society, past Treasurer of the Samuel Griffith Society, and the past Secretary for the Lavoisier Group where he had “written extensively on the global warming issue” at Lavoisier. [2]

Between 1982 and 2001 Evans worked with the Western Mining Corporation (WMC) as an Executive Officer, during which time he was a close associate of WMC CEO Hugh Morgan. “My role was to engage in the culture wars and provide him with feedback,” Evans says of his work for Morgan. Together with Morgan, he helped found the HR Nicholls Society in 1985.

“The global warming scam has been, arguably, the most extraordinary example of scientific fraud in the post-War period. So many people, and institutions, have been caught up in the web of deceit, master-minded by environmental activists working through NGOs and their manipulation of the IPCC processes, that the integrity of Western science is seriously at risk.” [4]

“If Kyoto is brought into effect the economic dislocation which must follow its implementation will be unprecedented in modern times. It will be equivalent to the famines of the early 19th Century in its disruptive power (except that the famines were followed by good seasons).” [5]

“Environmentalism has largely superseded Christianity as the religion of the upper classes in Europe and to a lesser extent in the United States.” [6]

Evans was the author of a document titled “Thank God For Carbon,” which noted that the Lavoisier Group had “donated generously to support the publishing costs. [10]

In the paper, Evans claims that “The belief that anthropogenic emissions of carbon dioxide are responsible for raising the world’s temperature during the last 30 years or so is shown here to be without any solid foundation.” [10]

He refers to “the religious movement we can call the global warming movement” as being “held tenaciously by only a small proportion of the population.” [10]

Evans concludes that “The Emissions Trading Scheme is a much greater threat to our lives and to our nation than any increase in carbon dioxide that man can produce.” [10]

Ray Evans, then-Secretary of the Lavoisier Group, wrote a paper titled “Satanic Gas: The Politics of Carbon Dioxide” where he argued that carbon dioxide has been wrongfully demonised. “Since 1998 […] global temperatures have either been stationary or, since 2002, in decline, but despite that, CO2 concentrations have continued to increase,” Evans claimed. [9]

Evans cited non-scientist Christopher Monckton, who claims that positive feedback mechanisms such as water vapour “are not to be found in the real world.” In conclusion, Evans wrote:  [9]

“[A]bove all, the belief that carbon is a demonic element, and that carbon dioxide is a satanic gas, is a retreat into fantasy of the most primitive and dangerous kind.”  [9]

Published the book Nine Facts About Climate Change (PDF) through The Lavoisier Group. His book was introduced by former mining executive Arvi Parbo at Parliament House in February, 2007.

Here are some sample quotes taken from the nine “Facts” (Note that Evans’s book has been debunked by RealClimate, and by other sources):

In January, 2006, Evans wrote a similar pamphlet titled Nine Lies About Global Warming where he “sought to summarise for the lay reader the state of the debate about increasing
atmospheric concentrations of carbon dioxide.”

In an ABC Radio interview, Clive Hamilton, director of the Australia Institute, described Evans as “responsible for establishing the Lavoisier Group as well as a number of right-wing organisations, the H.R. Nichols Society, the Benelong Society, the Samuel Griffith Society, all of which he was either President of Treasurer; they often shared the same post office box.”

These are some of his known affiliations: [7]

According to his profile at On Line Opinion, Evans has published in fields including environmentalism, Indigenous peoples’ movements, and economic and political issues affecting the mining industry.

According to a search of Google Scholar, Evans has not published any articles in peer reviewed journals on the subject of climate. He has, however, published numerous articles through the Lavoisier Group.