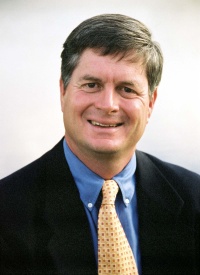 According to his profile at the Independent Institute, Davis was a Member of the Expert Panel on Global Change Research Strategy for the Environmental Protection Agency, Member of the Data Management Advisory Panel of the National Oceanic and Atmospheric Administration, a contributor to the 1995 Report of the Intergovernmental Panel on Climate Change and has testified on climate change before the House Science Committee. He is also listed as an editor of Climate Research journal. [3]

Tech Central Station lists him as past president of the climatology specialty group of the Association of American Geographers and past-chair of the American Meteorological Society’s Committee on Biometeorology and Aerobiology. [4]

“The question everyone should ask is not ‘Is the earth warming,’ but, ‘How is the warming being felt across the planet? Where is it warming? When? And by how much?’
It turns out that most of the warming is occurring in the high latitudes, in the winter, and across the planet, at night.” [5]

“…the temperature record at the surface is a contaminated record and urbanization needs to be factored out of that if we’re going to get any kind of accurate representation of how surface temperatures have changed over the last hundred years.” [5]

Was a co-author of the Independent Institute report “New Perspectives in Climate Change: What the EPA Isn’t Telling Us” criticizing the EPA‘s 2001 Climate Action Report. [6]

Appeared in a video by the Greening Earth Society titled “The Greening of Planet Earth Continues: The Promise for the 21st Century and Beyond.”

According to the video description, “Fourteen experts present evidence to show how current CO2 levels, which are 30 percent higher than in the pre-industrial era, have greatly enhanced the growth of trees and other plants. Results from controlled studies around the world show how a doubling of CO2 in the atmosphere, which is expected to occur over the next century, will increase crop yields by 30 to 40 percent, double the water-use efficiency of most of earth’s vegetation and could triple the productivity of forests.”

The video was sponsored by the Western Fuels Association. Fred Palmer, the President of the Greening Earth Society had this to say after a showing of the premier of the video:

If you’re going to reduce CO2 emissions from people in the United States, you have to go to the richest source first. And that is the power plants that we all are involved with. This is why this is so alarming to us, because we rely on them.

I say to my Board [of Directors of Western Fuels Association] when we have these discussions, “We have coal plants and we have debt in these institutions. That’s what we have.” When someone starts talking about raising our costs by charging us money to burn our own coal in our own power plants – or to burn American coal in American power plants – to pay money to people in Russia or China, it’s going to come from here first. It has to be, by definition, devastating.

Finding a common ground under these circumstances, given the issues, as they have been defined, not by us… [Well…] We are reacting. We are protecting. We are defending something we think is worthwhile from onslaughts coming from others. [This] requires [that] we engage in this activity in an educational campaign. Not just with respect to the science – that’s what this is about – but also with respect to the benefits of what it is that you do for people. Because you do provide benefits for people.

Contributed a chapter to the Cato Institute book, Climate Coup: Global Warming’s Invasion of Our Government and Our Lives which was edited by the prominent climate skeptic Patrick J. Michaels.

Cato describes the book as confronting “the exaggerations, opportunism, and myths about global warming that are all too pervasively altering the shape of our lives and provides the tools and insights necessary to push back against the takeover.

Wrote “Climate Cycle or Climate Psychic?” for Tech Central Station. The article claims that climate variations are due to natural causes.

Wrote “Why Regional Climate Forecasts are Meaningless” for the Heartland Institute’s Environment and Climate News.

Co-wrote a paper with skeptical scientists Patrick J. Michaels and Paul C. Knappenberger titled “The Way of Warming” in Regulation Magazine, a publication of the Cato Institute.

Wrote “Playing the numbers with climate model accuracy” for the Heartland Institute’s Environment and Climate News.

Wrote “Jimmying the Truth about Climate Change” for the Heartland Institute’s Environment and Climate News.

A complete list of Davis’s publications is available at his profile at the Department of Environmental Sciences at the University of Virginia.