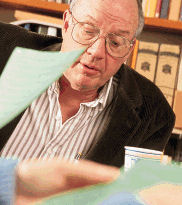 Robert Giegengack is an emeritus professor and former chairman of the Earth & Environmental Science department at the University of Pennsylvania. [2], [3]

A February 2007 profile in Philadelphia Magazine described Giegengack as a “relatively obscure geologist who taught more than he published” who later “stepped into the swirling tempest surrounding global warming, in part because he says it’s not even one of the top 10 environmental problems we face.” [4]

The following was Giegengack’s profile accompanying his appearance in the first Climate Hustle movie by Marc Morano and the Committee for a Constructive Tomorrow (CFACT): [5]

“Geologist Dr. Robert Giegengack, chaired the Department of Earth and Environmental Science at the University of Pennsylvania for 12 years. Has done field research on six continents, conducted peer-review studies on the geological archives of climate and spent much of his academic career doing field work on the history of climate. Authored 200 peer-reviewed papers. Giegengack: ‘CO2 is not the villain that it has been portrayed.”

A search of Google Scholar suggests most of Giegengack’s scientific publications appear to be in the area of geology or geoarchaeology. [12]

CFACT features Giegengack in its sequel, Climate Hustle 2, which premiered in September 2020. Between 1998 and 2007, CFACT has received at least $582,000 from oil giant ExxonMobil. In 2019, CFACT was also named as a creditor in Murray Energy‘s bankruptcy filings. [6]

In an article at Marc Morano’s Climate Depot, Giegengack outlined his “key points” on climate change: [7]

Giegengack was featured in Climate Hustle, a film produced by the Committee for Constructive Tomorrow (CFACT) and Marc Morano. Below are some of his comments from the movie: [8]

On the 97 percent consensus around man-made climate change, Giegengack commented:

“That’s a marketing… that’s an advertising ploy. I don’t think it means anything. I don’t think 97 percent of the people who look at the climate data critically share the opinion that anthropogenic emissions of CO2 is a primary driver of climate.”When asked “is carbon dioxide the control knob [for climate change],” Giegengack responded:

“I don’t see anything in the long-term geologic record to support that conclusion. CO2 is one of many, many, many variables that influence the Earth’s temperature.”

Morano: “Are you afraid of rising CO2 concentrations?

Giegengack: “No. No I’m not. CO2 is not the villain that it has been portrayed.”

He later suggested climate is colder than it’s ever been:

“I’m impressed by the fact that the present climate, from the perspective of a geologist, is very close to the coldest it’s ever been. The concentration of CO2 in the atmosphere today is closest to the lowest it’s ever been.”

“[cuts in…] I was appalled. I was appalled because he either deliberately misrepresented the point it was making, or didn’t understand it. So it was irresponsible of Al Gore [cuts off]”

Giegengack was quoted in a speech by Oklahoma senator Jim Inhofe as saying: [9]

Giegengack was interviewed in an issue of The Pennsylvania Gazette, the alumni magazine for the University of Pennsylvania. During the interview, Giegengack voiced his displeasure about Al Gore’s film, An Inconvenient Truth. [10]

“I’m just unhappy about the way Gore presented it,” he said. Giegengack claimed Gore produced  “a political statement [that] has to go head-to-head with what comes out of Washington or the American Petroleum Institute.” [10]

According to the Gazette’s Carter Johns, “Giegengack contends that natural warming periods in our planet’s past have triggered the release of CO2 into the atmosphere from ocean- and land-based reservoirs, and that the most significant consequence of human fossil-fuel consumption is that we have altered that balance by pouring CO2 into the atmosphere and those terrestrial reservoirs simultaneously. Since that relationship has been disturbed, he says, even a drastic reduction in CO2 pollution may not restore the natural dynamic.” [10]

Below are some of the questions and answers from that interview:

Q: What is your assessment of the threat global warming poses to the environment?

A: There are plenty of environmental problems out there; most of them are the consequence of a lot of people using a lot of energy. Global warming is a symptom of that fundamental problem. It’s one of many symptoms; it’s not the most severe. In terms of its capacity to cause the human species harm, I don’t think it makes it into the top 10.

Q: What problem do you have with Gore’s film?

The advocates of change are now appealing to fear as brazenly as the proponents of business-as-usual. [The latter] tell us we can’t afford to cut back on our carbon emissions because it would destroy the economy. The other side says the world is going to hell and the polar bears are drowning. Both are extreme positions. Scientists have gotten tied up in this political argument because they were frustrated that the politicians weren’t paying attention to what they said. In order to make the message more apparent to the public, they’re exaggerating the risks. An Inconvenient Truth is a prime example.

Q: What are some examples of these misleading statements?

A:  He claims that temperature increases solely because more CO2 in the atmosphere traps the sun’s heat. That’s just wrong … It’s a natural interplay. As temperature rises, CO2 rises, and vice versa. Variations in planetary alignment are most likely responsible … When gravitation from other planets’ orbits causes the Earth to move closer to or further from the sun, temperatures increase or decrease. When we find that CO2 levels follow that directly, it’s hard for us to say that CO2 drives temperature. It’s easier to say temperature drives CO2.

Q: What response have you gotten about your thoughts on the film?

A: People appreciated that I was drawing attention to the weaknesses in the film. Al Gore missed out on a really terrific opportunity with his name recognition, his access to these resources, and his pretty good understanding of climate processes. He could have put together a film that would have presented this problem in a rational context, and that would have been an enormous contribution. But he has abandoned the credibility of the scientific establishment. He missed the point in studying the cycles from prior periods, and he missed the point that it is the temperature that controls the CO2. Now, we have probably changed that because of the excess CO2 in the atmosphere, and we know or suspect that because we know we have reversed the flux. That’s probably the most significant finding: that we changed the way those systems operate. (Emphasis added).

Q: So it’s not that Gore is wrong, but that he portrayed the “crisis” inaccurately?

A:  He focused on fear. CO2 may make this change, but we’d like to be sure of that. And even if it does, he didn’t offer any solution, and neither has anybody else. He ignored the real threat, which is India and China, and he ignored other more immediate environmental problems.

“For most of Earth history the globe has been warmer than it has been for the last 200 years. It has only rarely been cooler,” Giegengack said during an interview for Philadelphia Magazine. [4]

“None of the strategies that have been offered by the U.S. government or by the EPA or by anybody else has the remotest chance of altering climate if in fact climate is controlled by carbon dioxide,” Giegengack was quoted by Marc Morano at Climate Depot. [11]

Giegengack appeared in Marc Morano’s 2020 film Climate Hustle 2: Rise of the Climate Monarchy, produced by the Committee for a Constructive Tomorrow (CFACT). He questioned the scientific consensus on the causes of climate change, stating: [14]

“you don’t find strong empirical support for the idea that atmospheric concentrations of CO2 are the primary drivers of atmospheric temperature and global climate.”

In reference to the consensus among scientists on man-made global warming, Morano asked Giegengack: “are 97% of your colleagues against you?” to which he responded:

“I think the people with a geologist’s perspective on the history of climate do not share the consensus that anthropogenic emissions of CO2 are the primary driver of climate.”

Giegengack’s work was cited in a floor speech by Republican senator from Oklahoma, Jim Inhofe, given to the U.S. Senate Committee on Environment & Public Works. In the speech, entitled “Global Warming Alarmism Reaches A Tipping Point”, Inhofe stated: [9]

“Perhaps the most scathing indictment of the ‘more CO2 equals a warmer world’ simplicity comes from Ivy League geologist Dr. Robert Giegengack, the chair of Department of Earth and Environmental Science at the University of Pennsylvania. Giegengack voted for Gore in 2000 and says he would do so again, but he is appalled by Gore’s ignorance of climate science. [9]

He tells his undergraduates: ‘Every single one of you knows more about [global warming] than Al Gore.’ [9]

Now this might be a bit technical, but what Giegengack is saying here is that it is temperatures that control CO2. This is crucial to understanding the reason why the scientific underpinnings of man-made global warming fears are utterly collapsing and the climate models are continuing to fail.” [9]

A search of Google Scholar shows most of Giegengack’s scientific publications appear to be in the area of geology or geoarchaeology. [12]

Giegengack has 56 publications listed at Researchgate. [13]

His archived profile at the University of Pennsylvania also lists publications, including a piece on sunspots published in Geophys. Res. Letters. [3]