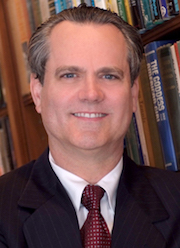 Robert Bradley Jr. is the founder and CEO of Institute for Energy Research (IER). Bradley spent nearly 20 years in the business world including 16 years at Enron where he served as corporate director of public policy analysis and as a speech writer for Kenneth L. Lay. [14]

Robert Bradley has been associated with a range of conservative and free-market think tanks; he was an adjunct scholar at the Cato Institute and Competitive Enterprise Institute CEI), an Energy and Climate Change Fellow at the Institute of Economic Affairs (IEA) in London, and an honorary senior research fellow at the Center for Energy Economics. He has been a member of the Academic Review Committee for the Institute for Humane Studies at George Mason University. [13]

He is also the author of several books including Climate Alarmism Reconsidered (2003) and Renewable Energy: Not Cheap, Not ‘Green’ (Cato Institute, 1997), and formerly ran the website Political Capitalism.org. [13]

“There is good news as good science drives out bad. The discrepancy between model-predicted warming and (lower) real-world observations has inspired new respect for natural climate variability relative to greenhouse-gas forcing. […] The real news is good news in contradiction to doom-and-gloom. It is time for energy and climate planners to lay down their government arms. Let consumers and taxpayers be.”

Writing in an issue of The New Individualist, Bradley claims that the science is not settled on climate change:

“It is as if the physical science is settled in favor of climate alarmism (it is not), and government intervention to ‘stabilize climate’ is cost-beneficial (it is not).” [2]

In one part of a three-part series Bradley wrote at IER on “The Philosophic Roots of the Paris Agreement,” Bradley concluded:

“People remain the problem to the congregation of the Church of Climate, as much as they want to say that forced energy transformation is compatible with economic coordination and prosperity.

“And here we are today. The Malthusian scares have been refuted one-by-one, leaving the daily sermons about the perils of manmade climate change. But trends are positive regarding the green greenhouse gas, carbon dioxide. The ecological benefits of increasing atmospheric concentrations of CO2 is in the news. Climate sensitivity estimates to the enhanced greenhouse effect are falling. The Paris agreement has been exposed on the Left as ‘a fraud … a fake … worthless.’ And the grassroots revolt against industrial wind turbines and solar farms is growing.

“The good news is that the Malthusian bad news is wrong. May the Church of Climate find its pews increasingly empty.” [24]

In the first part of his three-part series on the Paris Climate Agreement, Bradley declares:

“The rejection the Paris climate agreements is really the liberation of 7.5 billion people from a dangerous, anti-human, anti-progress agenda.” [25]

“The divestment of fossil-fuel stocks is both ineffectual against its corporate targets and hurtful to ordinary people,” Bradley said, describing divestment as “a futile crusade.” [27]

The following is from the abstract for an article Bradley wrote in The Electricity Journal titled “Climate Alarmism and Corporate Responsibility”:

“Voluntary actions by corporations should not go beyond innovative win–win ‘no regrets’ initiatives. Greenhouse gas control practices that are uneconomic penalize either consumers or stockholders while politicizing the issue of corporate responsibility. Few will be satisfied, and the ineffectual measures will eventually have to be abandoned.” [3]

The Institute for Energy Research (IER) published a commentary article by Bradley framing the proposed Green New Deal within the context of the perceived failures of the New Deal of the 1930’s. According to Bradley, citing another article by Pacific Research Institute Senior Fellow Robert Murphy, a Green New Deal would lead to a dramatic uptick in unemployment along with market “chaos” as a result of overreaching government regulation and selective enforcement. [32]

More concerning, according to Bradley, would be the necessary imposition of something akin to martial law in response to the inevitable resistance to government interference in energy markets:

“Expect a Green New Deal aiming to outlaw fossil-fuel usage to be a police state too, with self-interested actions towards cheaper, more reliable energies thwarting the central planners from Washington, D.C.” [32]

Bradley concludes with a dire warning that a Green New Deal would ultimately result in a failed state:

“[…] the proposed Green New Deal would be a giant leap on the road to serfdom. It would create the distortions and conflicts that would engender more of the same. Its slow-motion attack on wealth creation to subsidize the inefficient and a growing class of cronies would spiral the United States toward a present-day Venezuela.” [32]

“The purpose of this event is to promote and expand energy freedom in the United States, as outlined in President Donald Trump’s bold America First Energy Plan, a proposal first released during the 2016 presidential campaign. The president’s plan marks a decisive change in direction from the Obama administration’s ‘war on fossil fuels’ and focus on the theory of catastrophic man-caused climate change,” the conference description reads. [30]

He moderated a panel titled “REINing in the Regulators.” [31]

Bradley cites climate change denier Judith Curry, describing her as a “leading foe of (faulty) science emanating from groupthink, false certainty, bad incentives, and half-truths,” to claim that sea level rise is natural and not influenced by man’s activities.

“Humans are not going to stop sea level rise on the time scale of a few centuries by ceasing emissions of CO2,” Bradley wrote at IER. He concluded that “The good news is that sea level rise is much more modest than false prognosticators have led us to believe. Al Gore’s worst case scenario fooled some for a time, but no more.

[…] Rather than attempt to shave fractions of an inch off of future sea level rise in the distant future, policymakers should keep fossil fuels affordable, plentiful, and reliable to deal with climate and weather events of all kinds. Free-market adaptation, not a futile crusade to ‘stabilize’ climate, is the obvious choice for a free, prosperous world.” [21]

Note that Bradley/Curry’s claims that sea level rise is exaggerated is one of several myths debunked by SkepticalScience. [22]

Bradley spoke at an event hosted by the World Affairs Council of Houston titled “Local to Global Politics: Climate Change.”

“Knowing that climate activists abounded at the two-and-a-half day affair, I pitched an optimistic view of free markets and a cautionary one about intellectual elites identifying problems for the government to solve,” Bradley wrote at IER, adding: “My first slide was a quotation from William Happer, Professor of Physics, Princeton University: ‘I believe that the increase of CO2 is not a cause for alarm and will be good for mankind.’” [23]

He concludes by supporting the ”red team-blue team debate on climate science” proposed under Scott Pruitt’s EPA, adding that “This same debate deserves to be held in every classroom and public forum across the country.” [23]

Robert L. Bradley Jr. spoke at an event hosted by the Texas Public Policy Foundation titled “At the Crossroads Energy & Climate Policy Summit.” He spoke as part of Session VI, titled “ The Shale Energy Boom: Prodigious Prosperity In the Making ” described as “A discussion on the unprecedented opportunities before us: the U.S. is now the largest producer of energy in the world.” [15]

Robert L. Bradley Jr. attends the “At the Crossroads; Energy & Climate Policy Summit” in Houston, Texas, hosted by the Texas Public Policy Foundation and The Heritage Foundation. Bradley Jr. presents in “Panel IV: Not up to the Task: Energy Alternatives to Fossil Fuels?” with Marlo Lewis of the Competitive Enterprise Institute. [12]

Bradley wrote an Op-Ed at Forbes titled “Oil-Export Ban: Holding America Back,” where he argued that “restrictions on crude exports have no public purpose.” [20]

According to materials on file at the Center for Media and Democracy’s SourceWatch, Robert Bradley spoke at the Energy, Environment and Agriculture Task Force meeting of the American Legislative Exchange Council (ALEC) annual meeting in New Orleans, Louisiana. [17]

Bradley spoke at the Heartland Institute‘s Second International Conference on Climate Change (ICCC2) in New York City. His speech, titled “The Mathusian Virus in the Scientific Debate” can be viewed below. [28]

Bradley was a speaker at the Heartland Institute‘s First International Conference on Climate Change (CCC1) where he gave a presentation titled, “Lessons Learned from Enron’s Failed ‘Green’ Energy Policy.” [4], [5], [18]

According to a search of Google Scholar, Robert L. Bradley Jr. has not published any articles in peer-reviewed journals on the subject of climate. The search does list numerous articles by Bradley done for the Cato Institute.

Bradley published the following in an electricity journal:

Robert Bradley has authored numerous books regarding energy and climate change including The Mirage of Oil Protection (1989), Julian Simon and the Triumph of Energy Sustainability (2000), Climate Alarmism Reconsidered (2003), and Energy: The Master Resource (2004, with Richard Fulmer). His most recent book is Capitalism at Work: Business, Government and Energy (2008).

Climate Alarmism Reconsidered was published by the Institute of Economic Affairs (IEA), a right-wing think-tank, and distributed by the industry-funded Heartland Institute. In the book, Bradley claims that the world will never run out of fossil fuels, and that “a moderately warmer and wetter world from either natural or man-made causes promises more benefits than costs.” [11]

Bradley founded the website politicalcapitalism.org, which covers his most recent books and work. The site also contains memos critical of the theory of man-made global warming. The site also summarizes Bradley’s experience working with Enron.

Bradley is also a regular contributor to MasterResource, a free-market energy blog which is “dedicated to analysis and commentary about energy markets and public policy” and which claims to “better inform the energy debate in a civil but forceful manner.” MasterResource regularly posts articles skeptical of climate change.