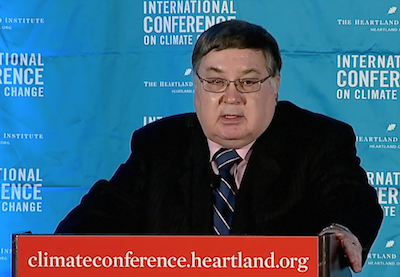 Roger Bezdek is an economist by training and the president and founder of the Virginia-based consulting firm Management Information Services, Inc. (MIS). According to the MIS website, Bezdek’s company specializes in “economic research and management consulting with expertise in economic forecasting, litigation support and expert witness testimony.”

According to his official bio, Bezdek has “40 years experience in consulting and management in the energy, utility, environmental, and regulatory areas.” Bezdek has served in various roles within the U.S. government, including the U.S. Department of Commerce and the Office of the Secretary of the Treasury.

Bezdek is the author of three books that deal mainly with energy policy issues. He is a contributing writer on the Committee for a Constructive Tomorrow (CFACT) website, normally co-authoring his work with Paul Dreissen. [2]

In recent years, Bezdek has been very vocal in his opposition to new U.S. regulations on greenhouse gas emissions and argues that excessive amounts of C02 are good for the planet and that the scientfic consensus on climate change is a “manufactured myth.”

On June 1, 2015, Bezdek testified on behalf of the coal company Peabody Energy at a Minnesota Public Utilities Commission hearing, where he went on the record stating that:

“CO2 is not harmful and is actually good for the planet…”

“The federal SCC [social costs of carbon] estimates do not adequately consider the benefits 27 of fossil fuels andCO2 emission.”

“In reality, the ‘scientific consensus’ is a manufactured myth…”

“… there is no convincing evidence that anthropogenic global warming (AGW) will produce catastrophic climate changes.”

Writing in an undated article appearing on Peabody Energy’s “Advanced Energy for Life” PR campaign website, Bezdek claims that, “[i]n a thinly disguised assault on coal and hydrocarbons, the Obama Administration would have us believe that carbon dioxide (CO2) is a threat to life itself.”

“CO2 is basically plant food, and the more CO2 in the environment the better plants do,” proclaimed Roger Bezdek, a consultant to energy companies, at an event hosted Monday by the United States Energy Association, an industry trade group.

Milbank also points out that while Bezdek is making scientific claims, he is not a scientist:

“And though Bezdek is an economist, not a scientist, he played one on Monday — showing a PowerPoint presentation that documented a tree growing faster when exposed to more carbon dioxide. ‘CO2 increases over the past several decades have increased global greening by about 11 percent,’ the consultant said.”

“The federal SCC [social costs of carbon] estimates do not adequately consider the benefits 27 of fossil fuels andCO2 emission.”[5]

“In reality, the ‘scientific consensus’ is a manufactured myth…”[6]

“… there is no convincing evidence that anthropogenic global warming (AGW) will produce catastrophic climate changes.”[7]

“climate change and peak oil are probably the two most long term, intractable energy and environmental problems the world faces.”[9]

Roger Bezdek was a speaker at the Heartland Institute‘s “America First Energy Conference” at the Marriott Hotel in Houston, Texas. [22]

The event description read as follows: [16]

“What scientific and economic evidence is there that the plan is putting the nation on the right path for economic growth, environmental protection, or both?” [16]

In a fundraising letter obtained by DeSmog, Fred Palmer had promoted the event as having the goal to “review the scientific and economic evidence that exposes the fraud inherent in the Obama-era regulation regime” while discussing “the overwhelming benefits of fossil fuels to us all.” [17]

As reported at the Houston Chronicle, speakers notably included two Trump Administration officials: Richard W. Westerdale II of the State Department and Vincent DeVito of the Department of Interior. David Bernhardt, deputy secretary of the Interior Department, was also formerly listed as a Heartland conference speaker, but apparently withdrew. [23]

The Climate Investigations Center put up a parody of the America First Energy conference website, complete with profiles on the individual speakers and highlighting their corporate funding and ties to groups such as the Cooler Heads Coalition (CHC). [25]

Bezek commented on President Donald Trump‘s appointment of Kathleen Hartnett-White as chair of the Council on Environmental Quality (CEQ), pending approval. Bezdek was quoted in a October 13 Heartland Institute newsletter: [19]

“I am pleased to see President Trump endorse Kathleen Hartnett White to be the new chair of the White House Council on Environmental Quality. White is highly qualified for this position,” Bezdek said.

“She is currently the director of the Armstrong Center for Energy and the Environment at the Texas Public Policy Foundation, and she served six years on the Texas Commission on Environmental Quality, including as its chair. She is the author of the seminal paper ‘Fossil Fuels: The Moral Case,’ which correctly argues fossil fuels are a necessary condition of modern prosperous societies. Indeed, not only are fossil fuels a necessary condition of prosperous societies, their byproduct, carbon dioxide, is beneficial for world agricultural production and has been ‘greening’ Earth for decades.” [20]

Hartnett-White has a history of representing fossil fuel interests. During her tenure as chair of the Texas Commission on Environmental Quality (TCEQ), appointed by then-governor Rick Perry, the TCEQ was found to “not consistently ensure violators are held accountable.” According to a 2003 Texas State Audit, polluters “often have economic benefits that exceed their penalties, which could reduce their incentive to comply.” [21]

As head of the CEQ, Hartnett-White would be in charge of coordinating interagency science, climate, and environmental policy and oversee things such as the National Environmental Policy Act (NEPA) review process and agency compliance with that law. [19]

“Though CEQ oversees the NEPA process, it remains unclear how seriously Hartnett-White will take the NEPA review process, for decades seen as a bedrock of U.S. environmental regulation since NEPA became law in 1970,” DeSmog’s Steve Horn reported. [19]

DeSmog reviewed the case findings, and reported how the arguments presented by Peabody were rejected by the Administrative Law Judge (ALJ). Some of Peabody’s central “scientific” arguments, as commented on by The ALJ in findings documents, were as follows: [11]

p.18 “Peabody asserted that significant climate change is not occurring or, to the extent climate change is occurring, it is not due to anthropogenic causes. Furthermore, Peabody insisted that any current warming and increased CO2 in the Earth’s atmosphere are beneficial. Based on its position on climate change, Peabody maintained that the externality value of CO2 would most accurately be set at or below zero.…”

p.31 “The Administrative Law Judge concludes that Peabody Energy has failed to demonstrate, by a preponderance of the evidence, that climate change is not occurring or, to the extent climate change is occurring, the warming and increased CO2 in the Earth’s atmosphere are beneficial.”

The Judge ruled unambiguously against Peabody, as reported Bloomberg BNA. [12] The Guardian also suggested a number of reasons that Peabody Energy lost the case, including Richard Lindzen‘s own admission that the case hinged on ignoring the IPCC expert consensus, and instead listening to contrarian science: [13]

“All of this [opposition] testimony is flawed to the extent it simply relies on … predictions by the Intergovernmental Panel on Climate Change […] today the best evidence indicates that … a much lower climate sensitivity value of 1°C or 1.5°C is correct […]” [13]

“Peabody’s scientists made errors that were easy to identify and point out to the Judge. Furthermore, the Judge was smart, quickly able to see through nonsense non-science,” The Guardian reports. “For those of you that read the report, you’ll notice that the Peabody side made claims about the natural variability of Earth’s climate, about Earth temperature changes, and about extreme weather events.” [14]

Some notable judicial conclusions were as follows, reports The Guardian: [14]

“22. The Administrative Law Judge concludes that Peabody failed to demonstrate that an equilibrium climate sensitivity of 1 or 1.5°C is correct.”

“23. The Administrative Law Judge concludes that the climate sensitivity is reasonably considered to be in the 2-4.5°C range.”

“47. The Administrative Law Judge concludes that Peabody failed to demonstrate that the relied upon process is neither peer-reviewed nor transparent.”

While Bezdek claims today that C02 is not harmful, that has not always been the case.

In a presentation in Sydney, Australia at the Smart 2007 Conference, Bezdek stated that, “climate change and peak oil are probably the two most long term, intractable energy and environmental problems the world faces.” In his slides [PDF] from the presentation, Bezdek states on slide 2 that “global warming is currently a major concern.”

Here’s Bezdek speaking at the Smart 2007 Conference in Sydney, Australia:

In March, 2005 Roger Bezdek co-authored a commentary article in Nature arguing for more investment in the “US environmental-protection workforce.”[3]