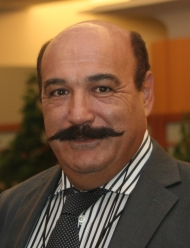 Samuele Furfari teaches Geopolitics of Energy at the Free University of Brussels where he obtained his PhD in coal gasification (his thesis was on the “transformation of coal into hydrocarbons”). He is a senior official in the European Commission on energy issues and sustainable development and has worked with the Directorate General for Energy and Transport. [11], [2], [3]

He has published several books (in French) in which he is skeptical of man-made climate change. His books include 101 quesitons sur l’énergie,  Politique et géopolitique de l’énergie (Technip, 2012), and L’écologie au pays des Merveilles (Bourin Editeur, 2012). Furfari is also the president of the Association of Evangelical Protestant Churches of Belgium. [4]

Furfari suggested there was “no reason to panic” about climate change, pointing to an article by economist Robert P. Murphy (who has worked for a range of industry-funded think tanks including the Institute for Energy Research). See Furfari’s tweet below:

“… there really is no imminent danger [in climate change]. Recall that we announced an increase in the temperature of 4°C in a century or 0.04°C per year, no thermometer has measured this.” [5]

“Sadly, the primacy of anti-nuclear sentiment over empirical fact has been a consistent feature of Europe’s nuclear-power debate since the 1980s. And the alarmist rhetoric surrounding today’s emerging nuclear technology is yet another example of this contradictory and self-defeating approach.”

Furfari, linking to an article from the Foundation for Economic Education (FEE), suggested there is no need to fear “unsustainability” or population growth because humans are “not a bane to our planet.” See his tweet below:

Do not be afraid of unsustainability! Human beings are not a bane to our planet but its greatest resource. https://t.co/NMJV0cjyBg via @feeonline

Furfari was interviewed by the Hellenic Association for Energy Economics (HAEE) ahead of his appearance at the group’s 4th Annual Symposium: [16]

“The energy transition is not an easy task. It will require many, many years. And, for sure, fossil fuels and also nuclear are not over,” Furfari said in the interview. “Greece, like many other EU countries, will remain in this paradigm. We should not dream that tomorrow everything will be 100% renewable.”

Writing on LinkedIn, Furfari claimed there is no connection between rising CO2 Levels and hurricanes: [19]

“Yesterday there were 4300 days (more than 12 years) without any major hurricane in the US while the film of Al Gore, and so others, predicted more and more . So there is no link with the growing CO2 emissions.”

“Putting our hope in environmentalism is the latest innovation of the Devil to keep man from the love and grace of God. Should C.S. Lewis have written The Screwtape Letters today he would probably add ‘environmentalism’ to the list of Satan’s tricks. Planting trees is not part of the Gospel, even if man has always and rightly planted trees.” [6]

Furfari attended the Hellenic Association for Energy Economics (HAEE) 4th Annual Symposium in Athens. On May 7, he presented on a panel titled ”The Evolution of the Natural Gas Markets (Pipelines & LNG).” [18]

Furfari wrote an article titled “The Myth of a Fossil Fuel Phase-Out” where he suggested “despite fears of shortages or threats from pollution, the planet has actually entered an era of fossil fuel abundance that shows no sign of abating.” [12]

“To put it bluntly, the world has nothing to worry about when it comes to reserves. After 40 years of fearing energy shortages, we have entered an era of abundance. We need to guard against false narratives, not scarce resources,” Furfari wrote. [12]

Samuele Furfari was registered to speak at a “Gas Power to Europe” conference which reported to “address the key role of Gas to Power in meeting the challenges of the UK and Europe’s energy requirements.” [7]

Hosted by the Gas to Power journal, the conference would “investigate the challenges associated with developing and financing gas to power generation infrastructure and investments” and is aimed at technical specialists and buyers within electricity utilities and power companies, as well as banking, legal, infrastructure development, corporate and project finance experts. [7]

According to the event description, “Ecology will be given its due place by analyzing facts, not fears – in the clear light of the Bible instead of hidden agendas. Behind sometimes a pseudo-scientific position on ecology, the worship of nature has returned to a world where God has been put aside. On the pretext of “saving our planet,” the development of poorer countries is jeopardised.” [4]

Held a conference on the “surprise emergence of unconventional gas.” In a later discussion with the European Energy Forum, Furfari describes how hydraulic fracturing and the use of new natural gas reserves will supposedly put off hitting “peak gas.” According to Furfari, “Natural gas, which is in overabundant supply, is now becoming a serious alternative fuel.” [8]

Furfari published Politique et géopolitique de l’énergie, in which he argues demand for oil and gas will eventually stabilize, and that there isn’t a pressing need to search for alternative energy sources. [9]

Furfari also believes in the use of unconventional gas reserves which requires fracking. According to Furfari, “Not using these reserves is inconceivable.” [9]

Furfari presented at the Climate and Energy presentation and debate at Sint Genesius Rode. Note that one of the authors of the presentation summary (PDF) was fellow skeptic Anne Debeil. [10]

The objective of the conference was to “re-open the debate on climate and energy matters especially in the scientific world.” [10]

The conference included presentations by well-known climate change skeptics including Fred Goldberg who concluded that “there are several natural phenomena that can explain the warming we saw between 1979 and 1998.” [10]

Furfari spoke on “Geopolitical Energy Policy and Energy Supply Security.” According to Debeil’s summary, “We will be dependent on oil for transportation for many years in the future. That is not a problem as oil reserves will be discovered or exploited in function of demand.” Coal, according to Furfari’s presentation, is also an option because modern coal plants are supposedly “a cheap and good environmental solution.” [10]

Furfari has associated with a number of Belgian climate change skeptics including:

According to a search of Google Scholar, Furfari has not published any articles in peer-reviewed journals on the subject of climate.

A full list of Furfari’s publications is available at his website at the Free University of Brussels.