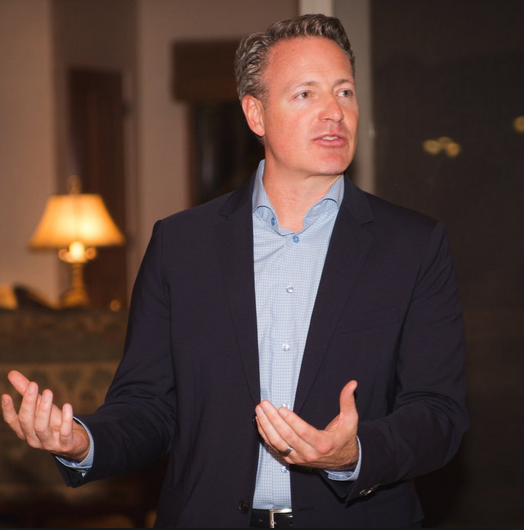 Sean Noble is a rightwing political strategist who founded and runs consulting firms, including DC London, Noble Associates, and Compass Strategies, along with the non-profit group dubbed American Encore. American Encore was formerly known as the Center to Protect Patient Rights (CPPR), originally set up to funnel money to oppose the Affordable Care Act and more. [1], [2], [3], [4], [5]

American Encore has since served as a key conduit for funds raised by the billionaire Koch brothers to a network of non-profits promoting climate science denial and right-wing causes. [2]

Between 1995 and 2008, Noble was Chief of Staff to former Republican Congressman John Shadegg, representing Arizona. In 2010, Shadegg’s re-election campaign disputed climate change, citing Steve McIntyre and Michael Fumento, who have a history of casting doubt on climate science. Shadegg was a member of the House Select Energy Independence and Global Warming Committee and the House Committee on Energy and Commerce. He opposed the Waxman-Markey American Clean Energy and Security Act, calling it a “life tax.” [3], [6], [7], [8]

Noble served as a “top advisor” to US Senator for Oklahoma, Tom Coburn, during his 2004 election campaign. Coburn has said he is a “global warming denier,” calling climate science “crap.” [2], [9]

Noble’s now-deleted blog, Noble Thinking, published an article in 2009 criticizing then Speaker of the United States House of Representatives Nancy Pelosi for tabling the American Clean Energy and Security Act, calling it a “HUGE tax increasing monstrosity.” The bill would have introduced a cap-and-trade emissions reduction plan similar to the EU Emissions Trading Scheme. [10]

Noble has ties to the UK‘s free market network through Matthew Elliott, former chief executive of the Taxpayers’ Alliance and the official pro-Brexit Vote Leave campaign. Elliott and Noble were listed as partners at technology firm Awareness Analytics Partners (A2P), which claims to have a database of 115 million social profiles that it uses to identify “networks and people” who share particular attitudes and attributes, before “micro-target[ing] your ads to the people most likely to take your desired action.” [25]

The Center to Protect Patient Rights

In 2012 alone, Noble was responsible for distributing almost $137 million from the Center to Protect Patient Rights, including to groups supporting Republican presidential candidate Mitt Romney, according to a ProPublica report. Tax returns revealed the Koch-funded CPPR had paid companies run by Noble almost $24 million for consulting and other services. [5]

The same year, the CPPR funded TV ads defending Wisconsin Governor Scott Walker during his recall election, through a group called the Coalition for American Values, apparently set up solely for this purpose. [11]

In 2016, three groups funded by the CPPR were fined by the Federal Elections Commission (FEC) for failing to disclose their sources of funding earmarked for federal political adverts. In 2010, the CPPR gave a total of more than $25 million to the Iowa-based American Future Fund, Virginia-based 60 Plus Association (founded by Noble), and Americans for Job Security. The FEC found Noble had closely directed the spending of the grants, violating federal rules requiring organizations to identify the source of any money earmarked for a political expenditure. [2], [12]

In 2013, the CPPR was ordered to pay a $500,000 fine to authorities in California, along with another Arizona-based group, Americans for Responsible Leadership (ARL), through which it had secretly funnelled $11 million to fight a tax increase and support a proposal to restrict unions’ political power. That was the largest election fine in California history. According to a Washington Post report, Noble worked with Tony Russo, a California-based Republican strategist, and the “two agreed to a money swap: Russo sent money to an Arizona group that Noble ran, in the hopes that Noble would get other organizations to send similar amounts back into California, masking the original donors.” Noble and the Kochs denied any wrongdoing. It is unclear who paid the fine. [13], [24]

CPPR has previously handed out grants of over $1 million to Concerned Women for America, Free Enterprise America, American Commitment, and the Coalition to Protect Patient Rights, as well as funding Americans for Responsible Leadership. [15]

Noble is a founder and board member of American Commitment, a group which joined a coalition of lobby groups in 2018 to pressure Congress to halt any expansion of the electric vehicle tax credit, or scrap it entirely, as reported by DeSmog. [16]

In 2013, Huffington Post reported that CPPR had been working with an affiliated Delaware-registered limited liability company, Corner Table, which does not have to reveal its contributors at all, according to tax documents filed by Freedom Partners, a free market group described by Politico as the “Koch brothers’ secret bank.” Freedom Partners has since rebranded itself as “Stand Together.” [17], [18]

“So much for climate science being “settled.” Al Gore eating a healthy serving of crow today.” [19]

“At my son’s little league game in Phoenix and freezing my tail off. Global warming? I think not.” [20]

In a blog post following the inauguration of Donald Trump as President, Noble wrote: [21]

“I was originally dismissive of Trump, figuring he would flame out in due time, but have grudgingly come to the realization that there are just enough Republican voters who simply don’t care about ideology and eat up the showmanship and blunt talk of the entertainer/businessman.

“I’d like to think that voters have a better sense of decency. If there is one word I associate with Trump it is indecent. He is vulgar, ugly, mean, misogynistic, and completely in love with himself. It appears that there is nothing this guy would not do or say to get ahead.” [21]

Three groups funded by the Noble’s Center to Protect Patient Rights were fined by the Federal Elections Commission in 2016 for failing to disclose their sources of funding earmarked for federal political ads supporting Republican House candidates during the 2010 election. [22]

Tax returns revealed that the Koch-funded Center to Protect Patient Rights had paid three firms owned by Noble almost $24 million for consulting and other services during the year. [5]

The Center to Protect Patient Rights was established, with Sean Noble as Executive Director. The group’s initial secretary was Heather Higgins, Chair of the Independent Women’s Forum (IWF), another Koch-tied group which has repeatedly rejected mainstream climate science. [5]