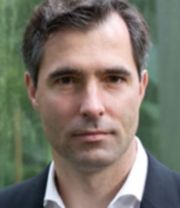 Sebastian Lüning (alternatively spelled Sebastian Luening) is a geologist currently working for Portuguese oil and gas energy corporation, Galp Energia, according to his LinkedIn profile.  He formerly worked for the oil and gas company RWE Dea AG in Hamburg, Germany. He was the 2005/2006 Visiting Professor at the University of Vienna. [2]

Lüning is the author of several geo-scientific documentaries. He is also the co-author of Die Kalte Sonne (Translated, “The Cold Sun”) with Fritz Vahrenholt. The book claims that global warming is not due to human activity, but rather due to the sun. Vahrenholt formerly served as the CEO of RWE Innogy. [12], [13]

Lüning also maintains a website for “Black Shale Research” which links back to his website on the Geology of North Africa and Arabia.

Die Kalte Sonne claims that “global warming over the past 150 years part of a natural cycle that is characterized primarily by the sun.” [3]

In his presentation at the 7th International Conference for Climate and Energy in Germany (the original presentation is in German), Lunning claims that warming is due to natural fluctuations in solar activity: [11]

“This is a geological context that unfortunately is lost on many people like physicists who believe their formulae more than they believe the true facts.” [11]

Talking about ice in Greenland:

“Despite the thousands of years of continuous warmth, the dramatic ice collapse never occurred.” [11]

He also calls the last 20 years of warming “statistically insignificant” and says that IPCC models have “no chance of success.” [11]

Sebastian Luning is listed as a “Founding Member” of group named Climate Exit (Clexit) led by climate change denier Christopher Monckton. According to Clexit’s founding statement (PDF), “The world must abandon this suicidal Global Warming crusade. Man does not and cannot control the climate.” [7], [8]

Desmog reports on how the group grew in the wake of the UK‘s decision to leave the EU. A key member of Clexit’s “60 well-informed science, business and economic leaders” is Hugh Morgan, a former board member of the Reserve Bank of Australia and former CEO of Western Mining Corporation with close ties to Australia’s Liberal party. [9], [10]

“If the Paris climate accord is ratified, or enforced locally by compliant governments, it will strangle the leading economies of the world with pointless carbon taxes and costly climate and energy policies, all with no sound basis in evidence or science […]” [8]

Sebastian Lüning was a speaker at the Heartland Institute’s Ninth International Conference on Climate Change (ICCC9) in Las Vegas, Nevada. [6]

Sebastian Lüning was a speaker at the Heartland Institute‘s 7th International Conference on Climate Change (ICCC7).

Heartland’s president Joe Bast revealed at the end of the conference that the Institute had no plans for future ICCCs. This could be in part due to the defections of corporate sponsors following Heartland’s unsuccessful Unabomber billboard campaign and the unintended release of their confidential documents.

The book claims that there is no climate catastrophe because global warming is part of a natural cycle related to the sun. [3]

“Guest authors” include climate skeptics Henrik Svensmark and Nir Shaviv both who have promoted the theory that the sun drives climate change. Other skeptics featured in the book include Nicola Scafetta and Werner Weber. [1]

Although only recently published, the book has already been found to contain numerous fallacies. See one article debunking it published by Zeit Online (translated here). Some of their claims were also refuted by astrophysicist George Feulner. [4]

A website (in German) titled KalteSonneCheck also collected media coverage of the book.

A full list of publications co-authored by Lüning is available here. [5]