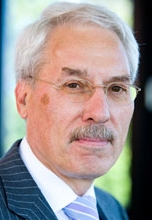 Fritz Vahrenholt has been an honorary professor in the Department of Chemistry at the University of Hamburg since 2009.

Since 2012, he has served as head of Deutsche Wildtier Stiftung (German Wildlife Foundation), a small private foundation which, among other deeds, argues that wind power threatens biodiversity and harms wildlife.

He served as Umweltsenator (senator for the environment) in Hamburg from 1991 to 1997, and was later a member of the Board of Directors of the oil and gas company Deutsche Shell AG, with responsibility for chemicals, renewable energy, public affairs, environment, electricity. In 2001 he became a member of the supervisory board.

From 2001 to 2007 he was the CEO of REpower Systems AG, Hamburg. He was also a member of the “sustainability advisory board” to chancellor Schröder and Merkel.

Vahrenholt is a co-author (with Sebastian Luening) of Die kalte Sonne (The Cold Sun), a book questioning the existence of man-made climate change which echoes some of the ideas of climate skeptics Henrik Svensmark and Nir Shaviv (who are also listed as guest authors).

Vahrenholt describes himself as a scientific reviewer of the IPCC report (The renewable energy section, not the section on climate science), and says that it was his first view of the report that caused him to become skeptical of climate change. [2]

“It would then become clear that the simple equation that CO2 and other man-made greenhouse gases are almost exclusively responsible for climate change is unsustainable. It hasn’t gotten any warmer on this planet in almost 14 years, despite continued increases in CO2 emissions. Established climate science has to come up with an answer to that.” [3]

Vahrenholt describes himself as pro-renewable. He is also pro-nuclear, and has argued to increase the run-time of nuclear plants, describing them as a “bridge” fuel. [4]

“For years, I disseminated the hypotheses of the IPCC, and I feel duped. Renewable energy is near and dear to me, and I’ve been fighting for its expansion for more than 30 years. My concern is that if citizens discover that the people who warn of a climate disaster are only telling half the truth, they will no longer be prepared to pay higher electricity costs for wind and solar (energy). Then the conversion of our energy supply will lack the necessary acceptance.” [5]

“At RWE Innogy, we were confronted with the fact that the wind and the corresponding power generation were dipping by an appreciable extent. I investigated this phenomenon scientifically and found that it has nothing to do with CO2 and global warming, but that natural climate processes are responsible for it. The activity of the sun plays a major role. I have been working on the subject matter and then worked a year on this book.” [2]

In an interview for The Global Warming Policy Forum, Vahrenholt discussed his reasons for signing a declaration titled “Listen to the scientists: 500 researchers protest against the fomenting of climate alarm”: [14]

“The climate debate has become so hysterical that it is driving politics into a cul-de-sac. But there is no climate emergency. […] Anyone today who claims that life on Earth is endangered within a few years is driving people into fear and politics into mistakes. That is irresponsible. It’s time to stop terrorising children – they are already at risk of insanity.” [14]

“Anyone today who claims that life on Earth is endangered within a few years is driving people into fear and politics into mistakes. That is irresponsible. It’s time to stop terrorising children – they are already at risk of insanity,” Vahrenholt said. [14]

The books claims that there is no climate catastrophe because “global warming over the past 150 years is part of a natural cycle that is characterized primarily by the sun.” [6]

“Guest authors” include climate skeptics Henrik Svensmark and Nir Shaviv both who have promoted the theory that the sun drives climate. Other skeptics featured in the book include Nicola Scafetta and Werner Weber. [7]

Although only recently published, the book has already been found to contain numerous fallacies. See one article debunking published by Zeit Online (translated here). Among these fallacies are the book’s claims that the Earth has not warmed since 1998, that the Hockey Stick graph was a hoax, that only the sun is to blame for global warming, that the IPCC has manipulated climate science, and that we are entering a period of global cooling due to solar inactivity.

In an interview with Spiegel, Vahrenholt explained why he wrote the book instead of publishing his work in a peer-reviewed journal: [3]

SPIEGEL: You make concrete statements on how much human activity contributes to climatic events and how much of a role natural factors play. Why don’t you publish your prognoses in a professional journal?

Vahrenholt: Because I don’t engage in my own climate research. Besides, I don’t have a supercomputer in my basement. For the most part, my co-author, geologist Sebastian Lüning, and I merely summarize what scientists have published in professional journals – just as the IPCC does …

Skeptical Science has also examined and refuted many of Vahrenholt’s arguments. [8]

One website, KalteSonneCheck (currently only in German) is tracking coverage on Die kalte Sonne.

Werner Weber, one of the “Guest Authors” of Die kalte Sonne, was also there as part of EIKE. According to their website, EIKE‘s Advisory Board is made up of well known climate change skeptics including Robert M. Carter, Richard S. Courtney, Hans HJ Labohm, Nils Morner, Christopher Monckton, Ian Plimer, and Zbigniew Jaworowski.  [11]

A search of Google Scholar reveals that Fritz Vahrenholt has published 40 articles in peer-reviewed journals on chemistry.

He does not appear to have published any articles in peer-reviewed journals on the subject of climate.