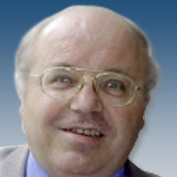 Werner Weber is an emeritus professor of physics at the Technical University of Dortmund. He has done past research with Bell Laboratories, and was a visiting research scientist at AT&T Bell Laboratories in Murray Hill, NJ.

His research areas are in theoretical solid state physics, but his CV (PDF) lists “new research [activity] on climate science” which is presumably related to his recent contribution to Die kalte Sonne or, “The Cold Sun,” a book which suggests that climate change is driven by solar activity.

In an article he wrote for the German newspaepr Bilde, he claims “the excessive heat forecasts of the IPCC is pure fear mongering!” He also attributes any recent warming or climate change to variations in solar activity, citing the research of fellow climate change skeptic Henrik Svensmark. [2]

“The field of climate science appeared to me as being very dogmatic right from the start, at least concerning the fundamentals.” [3]

Weber is listed as a “guest author” of a book written by Fritz Vahrenholt and geologist Sebastian Lüning titled Die kalte Sonne or, “The Cold Sun.”

The books claims that there is no climate catastrophe because “global warming over the past 150 years is part of a natural cycle that is characterized primarily by the sun.” [4]

Other “guest authors” include climate skeptics Henrik Svensmark and Nir Shaviv both who have promoted the theory that the sun drives climate. Nicola Scafetta appears to be another contributor. [5]

The book has contains numerous fallacies, according to one article published by Zeit Online (translated here). Among these fallacies are the book’s claims that the Earth has not warmed since 1998, that the Hockey Stick graph was a hoax, that only the sun is to blame for global warming, that the IPCC has manipulated climate science, and that we are entering a period of global cooling due to solar inactivity.

Notably, Fritz Vahrenholt, one of the authors of the authors of Die kalte Sonne, was also present (as a guest). Weber presented on the “Sun and Climate,” and a version of his presentation (in German) is available online (PDF).

A complete list of publications is available at the University of Dortmund (PDF). Most of his articles in peer-reviewed journals appear to be on the subject of solid-state physics. None of the articles listed are related to climate.

An independent search of Google Scholar reveals one article written by Weber: