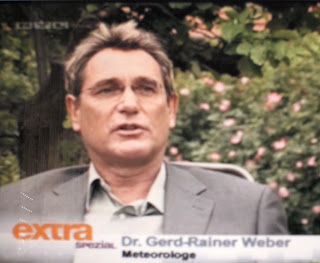 Gerd-Rainer Weber is a scientist with the German Coal Mining Association where, according his profile at the Heartland Institute, he is “responsible for scientific research, policy analysis and consultancy in the fields of the environmental impact of coal use, particularly problems related to air pollution and global warming.” He is also listed as a consulting meteorologist and independent researcher.

Weber has spoken at numerous climate change conferences and events. He is listed as a reviewer of the Climate Change 2001 synthesis report by the IPCC. [2]

“In a Democratic Society, Published opinion and public perceptions are the main drivers for political action, not indisputable scientific facts. Cases and point are the European Union’s Climate Change Strategy of 10 January 2007 and the Green Package of 23 January, 2008, but also some regional activities in the US and proposed action by US legislative bodies. Those Policies and proposals have been justified by the extremist view on climate change.” [4]

Weber was a speaker at the Heartland Institute‘s First International Conference on Climate Change (ICCC1.) His speech, titled “Inconsistencies in IPCC Predictions” can be viewed below.

Weber was part of a team organized by SEPP to conduct an “independent review of the IPCC‘s Third Assessment Report.” What SEPP called its “Science Integrity Team” briefed members of Congress, news media and other organizations on Capitol Hill about how, generally, climate change was a non-issue. [5]

Weber spoke at the “The Greenhouse Controversy” conference cosponsored by the European Academy for Environmental Affairs and SEPP in Leipzig, Germany.

The conference resulted in the formation of the Leipzig Declaration. [6]

Weber appeared in “The Greening of Planet Earth,” a 1992 video by the Greening Earth Society (GES). GES was set up by the coal utility cooperative Western Fuels Association (WFA) “as a vehicle for advocacy on climate change, the environmental impact of CO2, and fossil fuel use.” [10], [11]

A search of Google Scholar returns eight articles written by a GR Weber on the subjects of climate and temperature variation. His papers have appeared in the Climate Research Journal (see below) including one one paper co-written by fellow climate skeptic Robert Balling Jr. titled “Theoretical and Applied Climatology and the International Journal of Climatology” (PDF).

In 2003, Climate Research Journal published a controversial paper (PDF) by Willie Soon and Sallie Baliunas that prompted five of ten editors to resign in protest due to the flawed peer review process that allowed its publication. According to the acknowledgments listed in the paper, the study was partially funded by the American Petroleum Institute (API).