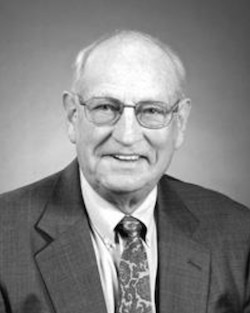 Charles Koch, the chairman and CEO of Koch Industries, knew Varner for more than 60 years and considered him “not only a close colleague and key contributor to building Koch Industries, but one of my closest friends.” [2]

Varner was born in 1919. His father and grandfather worked as contractors in the oil fields. Varner himself made his career in the oil and railroad industry. He was employed at Rock Island refinery in Duncan, Oklahoma, which was purchased by Fred Koch in 1946. He later moved to Wichita, where he worked as a purchasing agent for Koch refineries in Oklahoma and St. Louis. His role with Koch expanded from there. [1]

Varner was also a president of the Matador Cattle Company in 1968, which was incorporated by Fred Koch in 1952 and taken over by Charles Koch in 1967, after his father’s death. [3]

Sterling Varner does not appear to have made any public statements on climate change.

Following his death, Varner featured in October 2009 issue of the quarterly Koch newsletter. It is unclear the exact date the quote from Varner was taken: [4]

“Fred Koch was a genius,” said Varner, “but he had a very good people touch.”

Varner was quoted in Forbes: [5]

“We were practicing [Market Based Management] before they started preaching it. Charles and those guys just put a name on it.”

The New York Times reported Koch Industries was gaining unwanted press following a nine-year legal battle with Charles Koch’s younger brother, William. William had filed suit in Wichita, claiming Charles and Koch Industries had shortchanged him $1 billion many years ago. Varner commented for the article on William’s popularity with people in Kansas: [6]

“Billy’s brought his toys to town, shared them and people love it,” said Sterling Varner. “Meanwhile Charles has worked his butt off here. He put his heart into building this company. He’s given millions to charity and never said anything. Billy comes to town and builds a little boathouse and he’s a hero. We must be doing something wrong. If it weren’t for Charles, Billy wouldn’t even have a rowboat.” [6]

Sterling Varner was listed as a defendant in the case, along with Koch Industries itself, Charles G. Koch, David H. Koch, Tom M. Carey, and Donald L. Cordes. [7]

In a prior interview in 1989, Varner—who had been William’s former boss—had little positive to say. “Billy doesn’t like to look into one window too long,” recalled Varner. “He’s a lot better at ideas than at getting the job done. Billy couldn’t find his own thing, something he could excel at and be his own man.” [8]

Sterling Varner did not appear to hold any social media accounts.

No publications found for Sterling Varner.