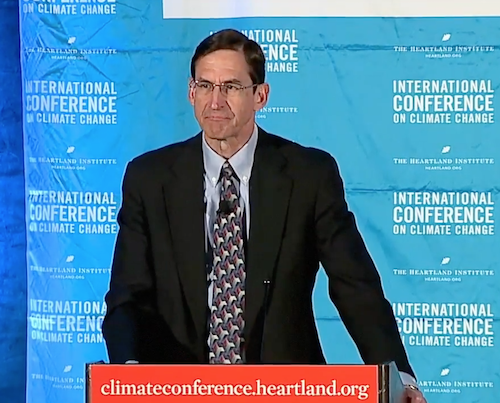 Steve Goreham is the Executive Director of the Climate Science Coalition of America and the author of Climatism! Science, Common Sense, and the 21st Century’s Hottest Topic. He is a regular speaker at events and radio talk shows where he is sometimes described as a “climate change expert.”

Goreham’s profile on Climatism.net describes him as an engineer and business executive with extensive experience at Fortune 100 public companies and private firms. They describe his book, Climatism as an “overview of the science, politics, and energy policy implications of the world’s misguided efforts to stop global warming.”

”[…] the science clearly shows that global warming is due to natural causes, despite the tidal wave of world belief in man-made climate change.” [2]

“The global wind industry is built on a foundation of sand—the hypothesis that man-made global warming is destroying Earth’s climate.” [3]

The Climate Science Coalition of America, represented by Steve Goreham was among 22 groups signed on to an open letter asking President Trump to ignore recent criticism of EPA Administrator Scott Pruitt. [22]

In a speech to the U.S. Senate, a group of Democratic senators identified the organizations as front groups for the Koch Brothers and other wealthy donors, nicknamed the “Web of Deceit.” The senators outlined how, in addition to funding from the Koch network, many of the groups use untraceable “dark money” funneled through groups like Donors Capital Fund and Donors Trust to influence legislation, particularly with regards to climate and pollution., represented by Lisa B. Nelson, was among 22 groups signed on to an open letter asking President Trump to ignore recent criticism of EPA Administrator Scott Pruitt.

Senator Whitehouse outlined it as “a web of deceit conceived and bankrolled by the Koch brothers and other self-interested billionaires to advocate for very selfish and unpatriotic policies.” Whitehouse added: “This web of deceit has infiltrated and populated the Trump administration, and it is swamping the interests of everyday Americans. [23]

The full list of pro-Pruitt signatories and their respective organizations is as follows:

Goreham was a speaker at the Friends of Science‘s fourteenth annual luncheon. Video of his speech below: [20]

Goreham was a speaker at the Heartland Institute‘s 12th International Conference on Climate Change (ICCC12), appearing on a panel on “Sustainability.” [19]

Goreham was a signatory of a petition (PDF) organized by Richard Lindzen of the Cato Institute urging President Donald Trump to pull the United States out of the United Nations international convention on climate change (UNFCCC). [17]

“In just a few weeks, more than 300 eminent scientists and other qualified individuals from around the world have signed the petition below,” Lindzen wrote in the letter. [17]

DeSmog investigated the list, and found that only a small handful of the signatories could be considered “even remotely ‘qualified’ or ‘eminent’ — but not in the field of climate science.” The list included individuals “interested in climate,” and one signatory who only identified as an “emailer who wished to sign the petition” while some signers provided no affiliation or address whatsoever. [18]

Steve Goreham was a signatory to a Cornwall Alliance open letter supporting Scott Pruitt for EPA Administrator under the Trump administration. [14]

Pruitt was further grilled on his fossil fuel ties at his confirmation hearing on January 18. [16]

Steve Goreham is listed as a “Founding Member” of group named Climate Exit (Clexit) led by climate change denier Christopher Monckton. According to Clexit’s founding statement (PDF), “The world must abandon this suicidal Global Warming crusade. Man does not and cannot control the climate.” [10], [11]

Steve Goreham was a speaker at the Heartland Institute’s Ninth International Conference on Climate Change (ICCC9) in Las Vegas, Nevada. [9]

Goreham’s spoke on panel 8, “Costs and Benefits of Renewable Energy,” along with Howard Hayden and Marita Noon. Video from the panel can be viewed below.

Steve Goreham was a speaker at the Heartland Institute‘s 7th International Conference on Climate Change (ICCC7). [21]

Goreham’s speech, titled “The Mad, Mad World of Climatism” can be viewed below.

Goreham was a speaker at the Heartland Institute’s Sixth International Conference on Climate Change. [4]

Goreham’s speech, titled “Climategate: Iceburg or Ice Cube?” can be viewed below.

Spoke at a meeting of the White County Tea Party Patriots to discuss climate change. [6]

Goreham is the author of Climatism! Science, Common Sense, and the 21st Century’s Hottest Topic.

A media release describes the book: “Goreham demonstrates that climate change is due to natural causes, not man-made emissions of greenhouse gases. Therefore, humanity is engaged in a futile effort to control the Earth’s temperature, imposing severe policies that will limit our freedoms and radically transform our way of life.”

He also publishes skeptical articles at Climate Realists, and contributes to conservative websites such as Big Government.