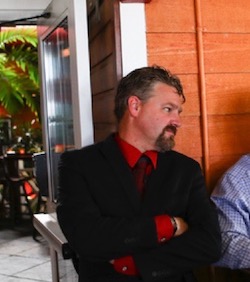 Timothy Williams Jr. is the Deputy Director in the Office of External Affairs at the Interior Department under the Trump administration.

Williams formerly served as the field director of the Nevada state branch of Americans for Prosperity (AfP), a front group founded by Koch Industries co-owner David Koch and Koch director Richard Fink.  Williams was Deputy State Director for the Trump 2016 General Election Campaign Organization in Nevada. He was also a founding partner of Battleground LLC, a political consulting group. [2]

In March 2017, E&E News listed Williams as among newly hired “mystery Trump workers” — previously unknown names with backgrounds difficult to pin down—who were joining the Trump administration’s Department of Energy and Department of Interior transition teams. Williams’ resume was later included as part of a collection obtained by The Guardian and Documented via public records requests revealing links between federal staffers and the Koch brothers network of activist groups. [3], [1], [4]

Before joining politics as the political director of the Clark County, Nevada Republican Party in 2011, Williams worked at a carpenters’ union from 1990 to 2001 and later as a realtor. In 2012, he worked as campaign manager for Danny Tarkanian’s congressional race. According to his resume, Williams also served as a partner at the political consulting firm Battleground LLC from Jan 2014 to March 2015. On LinkedIn, Williams lists his employment at Battleground as beginning in 2011 and ending in 2016, presumably to work for the Nevada campaign for Trump in August of that same year. [1], [4]

Charles Munoz and Michael P. Chamberlain, the two other leadership staff on Trump’s Nevada team, have been rewarded with posts at federal agencies. Both also had connections to Williams prior to working the election. Munoz helped found the AfP Nevada chapter in 2010, and was the Deputy State Director while Williams worked there. Munoz is now the White House Liaison for the Environmental Protection Agency. Chamberlain, according to Nevada business records, founded Battleground LLC with Williams. He is now Special Assistant to Secretary DeVos at the Department of Education. According to Williams’ resume, Battleground LLC was a “full-service Campaign Management and Candidate Development firm” that maintained its own database of Nevada voters and worked to gain “earned media.” [21], [22], [5], [1], [6], [7]

Emails and documents released as part of a Freedom of Information Act (FOIA) request, obtained by the Western Values Project (WVP) revealed Williams was a key coordinator of a plan to transfer control of oil and gas development on public lands to the states. He served as a point of contact for policy issues with industry groups including the American Petroleum Institute (API) and its state-level branches, and other oil and gas companies such as ConocoPhillips, Chesapeake Energy, and EOG Resources, DeSmog reported. [8], [9]

The Western Values Project filed their FOIA request for correspondence between industry representatives and the Department of the Interior after WVP obtained a leaked document from the Western Energy Alliance (WEA) that was effectively an “industry wish list.” Many of the leaked report’s recommendations made it into Secretary of Interior Ryan Zinke’s final report. [23]

Many of the communications revolved around the sage-grouse review team, which Williams was a member of. Conservation groups have pushed to protect the sage-grouse, which has seen populations decline in recent years, while industry lobbyists have fought against its listing as an endangered species in order to continue mining and drilling on sage-grouse inhabited lands. [10]

The New York Times reported in October 2018 on the powerful lobbying campaign, including the emails released from Williams and industry lobbyists, that helped to lead to the huge increase in oil and gas leases on federal lands under the Trump administration. [25]

In addition to participating in the sage-grouse review team, Williams was also in communication with industry groups regarding the Migratory Bird Treaty Act. On December 22, 2017, the DOI‘s Principal Deputy Solicitor Daniel Jorjani issued the legal decision that the “Migratory Bird Treaty Act applies only to purposeful actions that kill migratory birds, and not to energy companies and other businesses that kill birds incidentally.” [8]

The Western Energy Alliance (WA) had sent a letter to the U.S. Fish and Wildlife Service (FWS) “suggesting statutory changes to the Migratory Bird Treaty Act (MBTA)” on August 30, 2017. WEA wrote that the “threat of criminal enforcement for incidental take by FWS is unjustifiably causing delays or preventing permitting of projects on federal lands” and asked that the FWS “work with the administration” to produce “guidance that MBTA does not give the FWS to regulate incidental take for migratory birds.” [8]

On November 3, 2017, IPAA‘s Samantha McDonald emailed Tim Williams asking if there was “Any word on the solicitor’s opinion yet?”[8]

Tripp Parks, Western Energy Alliance’s Manager of Government Affairs, emailed members of Interior’s sage-grouse review team, including Timothy Williams, a letter “regarding the economic impacts of the Greater Sage-Grouse land use plans.” The letter has been described as “an industry wish list,” and the sage-grouse review team granted 13 of WEA’s 15 requests. [8]

Williams met with the Colorado Petroleum Council, a division of the American Petroleum Institute. [8]

The following day, IPAA Director of Government Relations Samantha McDonald emailed Timothy Williams to request “one more call” in his “sage grouse review capacity,” on behalf of industry representatives as it related to the same WY Executive Order PAW was interested in reforming. On July 27, 2017, Williams took the call with McDonald as well as representatives from “some of the following associations– Chesapeake, Conoco Phillips, EOG Resources, and Western Energy Alliance.” [8]

The report later issued by the Interior Department in August 2017 said they were “committed to developing a process to incorporate revised habitat maps.” McDonald followed up with Williams on Aug 17 regarding a map discrepancy, and Williams responded that the DOI was “working on it” and that he “let the Secretary know as well.” [8]

Proposed plan maintenance actions at BLM, signed October 2017, proposed map adjustments to sage-grouse habitat to match the executive order. This would align, in part, with PAW and IPAA‘s specific requests. The maintenance action at the BLM specifically proposed to “to update the PHMA and GHMA identified in the ARMPAs and ARMPs to match the State of Wyoming’s Governor’s Executive Order 2015-4.” [24]

While Timothy Williams does not appear to have a stated position on climate change, his former employer Americans for Prosperity has consistently campaigned to reduce or eliminate regulation on polluters. AfP has pointed to “alarmist propaganda” as promoting a binding international agreement on climate. [11]

Williams spoke with representatives of the Next 100 Coalition, a group of environmental activists, regarding the Bears Ears National Monument. Covering approximately 1.3 million acres in southeastern Utah, the monument includes land considered sacred to Native Americans and was designated a national monument near the end of President Obama’s time in office. Williams reportedly said in the meeting: [12], [13]

“No one in Utah cares about Bears Ears.”

Williams’ previous employer, Americans for Prosperity, celebrated Trump and Secretary of Interior Ryan Zinke’s announcement to cut the area of the Bears Ears and Grand Staircase-Escalante national monument, describing it as “an important step in reducing federal overreach in Western states.” [14]

Timothy Williams, among others, was highlighted in an ethics complaint filed by the Campaign Legal Center outlining a “a disturbing pattern of misconduct” in the Interior Department, The Intercept reported. [26], [27]

The complaint notes Williams’ former affiliation with Americans for Prosperity (AFP), and his failure to report it on disclosures:

“Williams failed to disclose his position with AFP on his new entrant financial disclosure report, and failed to disclose any compensation from that position, in apparent violation of his reporting obligations. However, he did report an AFP defined contribution plan and 401k.” [27]

Another potential ethics violation was Williams’ meeting with Chrissy Harbin, vice president of AFP, on June 14, 2017 — approximately three months after he was appointed. Williams’ official calendar listed the purpose of the meeting as “to discuss partnering on shared priorities.” [27]

As a senior political appointee, Williams likely signed an ethics pledge that would have prohibited meeting with “any particular matter involving specific parties that
is directly and substantially related to [the appointee’s] former employer” for a period of two years after appointment. [27]

DeSmog reported that Williams spoke at a “State Energy Policy Summit” organized by the Thomas Jefferson Institute — a member of the State Policy Network (SPN), a powerful network of think tanks supported largely by conservative foundations and designed to advance “market-friendly public policy.” [15], [16], [17]

According to a copy of the conference agenda, obtained by DeSmog, participating companies included Dominion Energy, General Electric, and Georgia Power as well as officials from the DOE and DOI. Event sponsors included the Thomas Jefferson Institute, The Lynde and Harry Bradley Foundation, and the Consumer Energy Alliance, an advocacy group working on behalf of the oil and gas industry. [15]

In an email invitation, IPAA‘s Director of Government Relations Samantha McDonald asked a “favor” of Williams to “speak to our group on your job, and how you bridge coalition and secretarial priorities.” McDonald noted the meeting was “off the record” and other invitees included “a few other folks from DOI.” Interior Deputy Secretary David Bernhardt was also invited, although potential “recusal issues” could prevent him from speaking. Other names listed by McDonald included Aurelia Skipwith as well as Patrick Traylor and Many Guneskara from EPA. [8]

According to the event description: [19]

“This one-day, in-person meeting will feature presentations from key regulatory policymakers on current issues that impact independent oil and natural gas producers. The conference is sponsored by IPAA’s Land & Royalty Committee and the Environment & Safety Committee and will include off-the-record question and answers from policy staff at the U.S. Environmental Protection Agency (EPA), Pipeline and Hazardous Materials Safety Administration (PHMSA), and the Department of the Interior. All IPAA members are welcome to attend.”

Speakers at the event were instructed to “speak to our group on your job, and how you bridge coalitions and secretarial priorities,” according to documents reviewed by the Western Values Project. [8]

Tim Williams does not appear to regularly contribute to news articles or online journals.