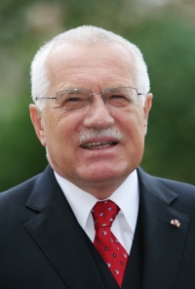 He is an economist and is co-founder of the Civic Democratic Party, the major Czech right-wing party. He is also an outspoken climate change skeptic who has spoken at a number of International Conferences on Climate Change (ICCCs) hosted by the Heartland Institute.

In 2006 Klaus received the Foundation for Economic Education‘s Adam Smith Award for Excellence in Free-Market Education.

Klaus started his political career in December 1989 when he became Federal Minister of Finance. In October 1991 he was appointed vice chairman of the government of the Czechoslovak Federal Republic.

At the end of 1990 he became the chairman of the Civic Forum. Following its demise in April 1991 he co-founded the Civic Democratic Party, of which he was chairman from its inception until December 2002. He won a parliamentary election with this party in June 1992 and became Prime Minister of the Czech Republic. He was elected president on February 28, 2003.

Klaus founded the Center for Economics and Politics (Centrum pro ekonomiku a politiku) in 1998. The think tank describes itself as an “educational and research institute” with the aim to “promote the ideas of a free society and a market economy” according to a translation of its website. [22]

“As someone who lived under communism for most of his life, I feel obliged to say that I see the biggest threat to freedom, democracy, the market economy and prosperity now in ambitious environmentalism, not in communism.” [3]

“And finally, there is another danger: the emergence of nonideological but very aggressive ‘isms,’ which are really quite new. Let me at least name them:

– We all care about human rights, but I am afraid of ‘human rightism.’

– We all want to have a healthy environment, but I see the danger in environmentalism.

– To put it politically correctly, I admire the second gender, but I fear feminism.

– We all are enriched by other cultures, but not by multiculturalism.

– I am aware of the importance of voluntary associations, but I fear NGOism.” [4]

“Nevertheless, there is another threat on the horizon. I see this threat in environmentalism which is becoming a new dominant ideology, if not a religion. Its main weapon is raising the alarm and predicting the human life endangering climate change based on man-made global warming… . It became politically correct to caricature us, who dare to speak about it, as those who are talking about things they do not understand and are not experts on. This criticism is inappropriate. People like me do not have ambitions to enter the field of climatology. They do not try to better measure global temperature or to present alternative scenarios of the future global climate fluctuations.” [14]

“To reduce the interpretation of the causality of all kinds of climate changes and of global warming to one variable, CO2, or to a small proportion of one variable — human-induced CO2 — is impossible to accept. Elementary rationality and my decades-long experience with econometric modelling and statistical testing of scientific hypotheses tell me that it is impossible to make strong conclusions based on mere correlation of two (or more) time series.” [15]

“I’m convinced that after years of studying the phenomenon, global warming is not the real issue of temperature. That is the issue of a new ideology or a new religion. A religion of climate change or a religion of global warming. This is a religion which tells us that the people are responsible for the current, very small increase in temperatures. And they should be punished.” [16]

Appearing in Marc Morano’s 2020 film Climate Hustle 2: Rise of the Climate Monarchy, produced by the Committee for a Constructive Tomorrow (CFACT), Klaus commented: [23]

“what are the similarities between the old communist-like communist type of central planning and environmentalism? In both cases, they want to dictate the economy.”

“I am afraid that there are new ‘isms.’New ‘isms’ [that are] more and more dangerous in the last era. And I put on the first place definitely one ‘ism’ called environmentalism or global warming alarmism.”

“Our life in communism increased our sensitivity to all ways…all endangering of freedom and democracy in the world and therefore, I am so active against any other ideology which is killing freedom, democracy and prosperity, which is global warming alarmism and environmentalisms.”

“The green agenda, and the environmentalist agenda and the fighting climate agenda is trying to basically stop the existence of the free market system, which we were fighting for, for and we are dreaming about in the communist era for decades,” Klaus claimed.

During a discussion about the UN’s commitments to reversing climate change, Klaus stated:

“this is the way to a brave new world of the future. The brave new world of dictatorship and to totalitarianism,” later claiming that he “was the only one who at the UN summits spoke radically against the nonsense of global warming doctrine.”

Vacalv Klaus is a “Honorary Patron” and member of a group titled Climate Exit (Clexit) founded in the summer of 2016. According to Clexit’s founding statement (PDF), “The world must abandon this suicidal Global Warming crusade. Man does not and cannot control the climate.” [17], [18]

As Desmog reports, another key member of Clexit’s “60 well-informed science, business and economic leaders” is Hugh Morgan, a former board member of the Reserve Bank of Australia and former CEO of Western Mining Corporation with close ties to Australia’s Liberal party. [19], [20]

“If the Paris climate accord is ratified, or enforced locally by compliant governments, it will strangle the leading economies of the world with pointless carbon taxes and costly climate and energy policies, all with no sound basis in evidence or science […]” [18]

Klaus was a speaker at the Heartland Institute’s Seventh International Conference on Climate Change (ICCC7). Although he criticized Heartland’s controversial billboard campaign that stated “the most prominent advocates of global warming aren’t scientists; they are murderers, tyrants and madmen,” he said that he would still be speaking at the conference.

Klaus’s spokesperson talked to The Guardian: [13]

“President Klaus is principally against non-serious, aggressive and provocative billboard campaigns of the kind the Heartland Institute used recently… . Mr president will attend this conference.”

Klaus’ keynote address can be viewed below.

Vaclav Klaus spoke at a National Press Club Address on “The mass delusion of climate change” where he called global warming “a communist conspiracy.” [5]

Klaus voiced his disapproval of the 2009 UN Climate Change Conference:

“It’s a propagandistic exercise where 13-year-old girls from some far-away country perform a pre-rehearsed poem,” he said. “It’s simply not dignified.” [6]

President Barack Obama was among the top speakers at the conference.

Klaus spoke at the Heartland Institute’s Second International Conference on Climate Change. Co-sponsors of the conference, which contend that global warming is not a crisis, had collectively received over $47 million in funding from energy companies and right-wing foundations.

His speech, titled “No Progress in the Climate Change Debate” can be viewed below. [21]

Klaus published a book titled Modrá, nikoli zelená planeta (literally translated “Blue planet – not green”). The title in English, which is not a direct translation, is “Blue Planet in Green Shackles”. Archived March 27, 2012.

The book claims that “The theory of global warming and the hypothesis on its causes, which has spread around massively nowadays, may be a bad theory, it may also be a valueless theory, but in any case it is a very dangerous theory.”

Klaus spoke at the Heartland Institute’s First International Conference on Climate Change in New York. Klaus’ speech, titled “We should not make big mistakes over climate change” can be viewed below. [7]

Klaus appeared on BBC World‘s HARDTalk to discuss why he believes that environmental concerns have been over hyped. He also accuses Al Gore of being an “apostle of arrogance.” [8]

At a United Nations Climate Change Conference, Klaus called for a second IPCC to be set up to produce competing reports because “to get rid of the one-sided monopoly is a sine qua non for an efficient and rational debate.”

He also suggested that “any country should be left alone to prepare its own plan to tackle this problem and decide what priority to assign to it among its other competing goals.” [2]

Vaclav Klaus argued in the Financial Times that environmentalism is the biggest threat to freedom, democracy, the market economy and prosperity.

Mr Klaus wrote hat “global warming hysteria has become a prime example of the truth versus propaganda problem” and the issue “is more about social than natural sciences and more about man and his freedom than about tenths of a degree Celsius changes in average global temperature.” [9], [10]

Klaus has criticized the IPCC, claiming that the panel does not include neutral scientists.

“These are politicized scientists who arrive there with one-sided opinion and assignment,” he said. [11]

According to his CV, Klaus has published over 20 books on general social, political and economic themes. He published Planeta azul (no verde), (“Blue Planet in Green Shackles”) in September, 2008.