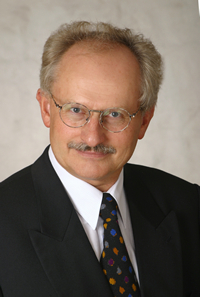 Klaus Angerer is a general manager at the German branch of BNK Petroleum (BNK Petroleum Germany GmbH), an international energy company “focused on the acquisition, exploration, and production of large oil and gas reserves with a strategic focus on Europe.” According to his profile on LinkedIn, his work at BNK has been to set up their unconventional gas business, as well as oversee PR and lobbying as well as and government relations. He has also done independent consulting work, and has held several other positions in the energy industry. Angerer graduated in 1985, as a Petroleum Engineer at Leoben University. [1]

Angerer was a former employer of the Austrian energy group OMV. Previously he headed the OMV office in the United Arab Emirates where he oversaw development activities and coordinated with the International Petroleum Investment Company (IPIC) of Abu Dhabi. Prior to that assignment, he was the General Manager of OMV Iran from 2001 to March 2007. In 1999 and 2000 he was the Project Manager for Iran projects in OMV‘s headquarters in Vienna, and from 1993 to 1998 he worked for OMV in Pakistan as Operations Manager and Head of the Petroleum Engineering Department. Before joining OMV in 1991, he worked as a Petroleum Engineer at RAG, a Shell – Mobil joint venture in Austria. Before joining RAG in 1986, he taught one year as an Assistant Professor at the Petroleum Institute of the Leoben University (Austria). [2]

“These studies and additional exploratory wells can then draw conclusions whether the gas is economically recoverable. This could be started in 2017. […]  Especially in Central Germany, we see the possibility that the natural cracks of the flow of gas can be sufficient.” [3]

Angerer assures that fracking will not contaminate drinking water: “We go one to three kilometers deep. The highly mineralized groundwater there will never be used as drinking water.” [4]

As the General Manager of BNK Petroleum’s branch in Germany, Angerer has been in charge of advancing their unconventional gas exploration, which requires hydraulic fracturing or “fracking.” While BNK petroleum contends that it is a myth (PDF) that “Frac[k]ing of shale contaminates fresh water supplies,” DeSmogBlog’s investigation on the issue has come up with a different set of conclusions. Klaus Angerer recently announced that BNK would be drill testing in the areas of Braunschweig, Wolfenbüttel, Gifhorn, Helmstedt, Peine and Salzgitter for shale gas. The news has met with local opposition, and questions about the risks of groundwater contamination. [5], [6]

Klaus Angerer is a confirmed speaker at European Unconventional Gas Summit in Vienna Austria, representing BNK Deutschland GMbH. [7] The conference brings together government officials, operators and industry heads to “delve into managing the above ground risks and overcoming the technical challenges of European shale reservoir development.”

According to the conference website, “Experts will discuss their success in communicating shale gas facts to the public and how to gain community acceptance in populous areas.” The event is organized by “The Energy Exchange” and Clarion Events, groups sponsored by major petrochemical companies like Shell, BP, Chevron, ConocoPhillips, to organize major energy-industry events.

A search of Google Scholar for “Klaus F Angerer” and for “Klaus Angerer” do not return any relevant results in peer-reviewed journals.