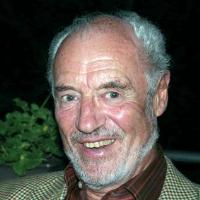 Walter Fett is a Meteorologist. He started his work as a meteorologist at the Meteorological Observatory in Potsdam. He is a past Director and Professor at the Institute for Water, Soil and Air Hygiene (Institut für Wasser-, Boden- und Lufthygiene) at the Federal Health Office in Berlin. The predominant nature of his work has been in the area of statistics. [2]

“In a strange game of circling of the Earth, Moon and Sun in the galactic space to describe their movements, the occurrence of heavy rainfall in the world order and surprising degree. The moon periodic precipitation enhancement refers to the sun and galaxy as a root cause background. Even though there is still a lack of physical justification, but this extraterrestrial activity is pulling in climatic terms already be strictly considered. A privilege to anthropogenic climate change dominance in the discussion is already regarded as obsolete due to quantitative comparisons.” [1]

Walter Fett’s research (PDF) focuses on the Moon’s effect on precipitation, and in turn its potential influence on the greenhouse effect. Fett argues that

“the effect of such extra-terrestrial elements should be considered with reference to climate change, while the anthropogenic or man-made element should be regarded as “obsolete.” [4]

Fett published an essay titled “Sunspots – Promoted Anthropogenically?” In the essay, he discussed the ways climate regulations limit the freedoms of the individual.

Fett published a paper titled “Sun, Moon and Rain, over a luni-solar rain effect.” In the paper he discussed lunar and solar cycles and their effects on precipitation and climate.

“The day as the sun annually varying influence on weather, weather and climate well known and familiar to us. And that the systematic changes in the orbital parameters over many Can cause thousands of years to periodic climate change is somewhat understandable. But already the periodic and non-periodic change of solar activity is in their impact our atmosphere is not well understood.” [5]

“Not only the last statement that the general climate in the long term undergoes changes, whether they are naturally or anthropogenic, can raise questions the resistance of the lunar effect also arise.” [5]

Walter Fett was a speaker (PDF) at the Eighth International Conference on Climate Change (ICCC-8)/Fifth International Conference on Climate and Energy (ICCE-5) sponsored by both the Heartland Institute and the European Institute for Climate and Energy (EIKE). Fett’s speech, titled “Why do we observe most heavy precipitation following eclipses?” can be viewed below.[6]

A full list of Walter Fett’s publications is available at his website (PDF) and at the European Institute on Climate and Energy (EIKE). He has published a number of articles in the areas of Meteorology and Thermodynamics.