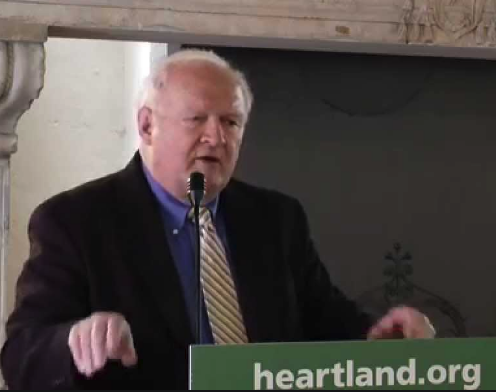 According to his biography at the Seventh International Conference on Climate Change, Harold Doiron is known for his experience in eliminating unstable vibrations in liquid propellant rockets.

He organized and led the NASA/industry team, titled the “Pogo Prevention Panel”
that successfully eliminated this pogo stick vibration problem from the Space Shuttle design.

According to an open letter signed by Doiron,

“We believe the claims by NASA and GISS, that man-made carbon dioxide is having a catastrophic impact on global climate change are not substantiated… . With hundreds of well-known climate scientists and tens of thousands of other scientists publicly declaring their disbelief in the catastrophic forecasts, coming particularly from the GISS leadership, it is clear that the science is NOT settled.” [2]

“Public policy decisions with potential major changes to energy use in the USA to affect climate change, should have more engineering input … The Physics, chemical, biological and heat transfer processes involved in Climate Change modeling and analysis are similar to large, complex systems familiar to Aerospace Engineers.” [3]

In January 2018, more than 200 scientists endorsed an open letter calling on the American Museum of Natural History (AMNH) to remove climate change denier Rebekah Mercer from its board and to “end ties to anti-science propagandists and funders of climate science misinformation.” The New York Times reported that those among the AMNH letter calling for Mercer to step down were Michael E. Mann, director of the Earth System Science Center at Pennsylvania State University, and Katharine Hayhoe, director of the Climate Science Center at Texas Tech University. [29]

Doiron was among a group of climate change deniers who responded with their own open letter, calling for the AMNH “not to cave in to this pressure.” The letter was signed by numerous individuals with ties to groups funded by the Mercer Family Foundation such as Will Happer of the CO2 CoalitionRichard Lindzen, a fellow at the Cato InstituteCraig Idso, the chairman of the Center for the Study of Carbon Dioxide and Global Change. There are a number of signatories affiliated with the Heartland Institute, which has received over $5.78 million from the Mercer Family Foundation since 2008. [30]

Doiron was listed as a speaker at the Heartland Institute’s “America First Energy Conference” at the Marriott Hotel in Houston, Texas. Doiron spoke on Panel 2A “Energy and National Security.” His speech was titled “Climate Alarmists are a Threat to Our National Security”: [25]

The event description read as follows: [22]

“What scientific and economic evidence is there that the plan is putting the nation on the right path for economic growth, environmental protection, or both?” [22]

In a fundraising letter obtained by DeSmog, Fred Palmer had promoted the event as having the goal to “review the scientific and economic evidence that exposes the fraud inherent in the Obama-era regulation regime” while discussing “the overwhelming benefits of fossil fuels to us all.” [23]

As reported at the Houston Chronicle, speakers notably included two Trump Administration officials: Richard W. Westerdale II of the State Department and Vincent DeVito of the Department of Interior. David Bernhardt, deputy secretary of the Interior Department, was also formerly listed as a Heartland conference speaker, but apparently withdrew. [26]

The Climate Investigations Center put up a parody of the America First Energy conference website, complete with profiles on the individual speakers and highlighting their corporate funding and ties to groups such as the Cooler Heads Coalition (CHC). [28]

Harold Doiron was a signatory of a petition (PDF) organized by Richard Lindzen of the Cato Institute urging President Donald Trump to pull the United States out of the United Nations international convention on climate change (UNFCCC). [20]

“In just a few weeks, more than 300 eminent scientists and other qualified individuals from around the world have signed the petition below,” Lindzen wrote in the letter. [20]

DeSmog investigated the list, and found that only a small handful of the signatories could be considered “even remotely ‘qualified’ or ‘eminent’ — but not in the field of climate science.” The list included individuals “interested in climate,” and one signatory who only identified as an “emailer who wished to sign the petition” while some signers provided no affiliation or address whatsoever. [21]

Hal Doiron, as part of “The Right Climate Stuff Research Team,” spoke at an event hosted by the Texas Public Policy Foundation titled “At the Crossroads Energy & Climate Policy Summit.” He spoke alongside other TRCS members including Walter Cunningham and Dr. George L. Stegemeier, to “set the record straight on climate science.” [19]

Hal Doiron was a speaker on Panel 13: “The Right Climate Stuff,” at the Heartland Institute’s Tenth International Conference on Climate Change (ICCC10) in Washington, D.C., with Tom Wysmuller and Walter Cunningham. [16]

Harold Doiron is a signatory to an open letter to Pope Francis on climate change. The letter invites the Pope to reconsider his views on climate change before his upcoming encyclical letter on the environment, which is widely expected to call for measures to prevent climate change in the interests of the world’s poor.

The open letter was coordinated and signed by Calvin Beisner of the Cornwall Alliance. According to the letter, “Good climate policy must recognize human exceptionalism, the God-given call for human persons to ‘have dominion’ in the natural world (Genesis 1:28), and the need to protect the poor from harm, including actions that hinder their ascent out of poverty.” [9]

Judith Curry comments on her blog Climate Etc. that “Arguably the most effective ‘pushback’ comes from Cal Beisner of the Cornwall Alliance, who coordinated An Open Letter to Pope Francis on Climate Change.” [10]

Hal Doiron presented in the Vatican City, Italy, along with skeptics such as Christopher Monckton and Calvin Beisner of the Cornwall Alliance, for a press event hosted by the Heartland Institute in order to “dissuade Pope Francis from lending his moral authority to the politicized and unscientific climate agenda of the United Nations,” according to a Heartland Institute press release. [14], [15]

DeSmogUK attended the event and noted that “just nine journalists made up the audience at Heartland’s press conference.”

Harold Doiron attends the “At the Crossroads; Energy & Climate Policy Summit” in Houston, Texas, hosted by the Texas Public Policy Foundation and The Heritage Foundation. Doiron presents in “Panel I: The State of the Science,” with Judith Curry and Roy Spencer. [8]

Harold Doiron was a panelist at the Heartland Institute’s Ninth International Conference on Climate Change (ICCC9) in Las Vegas, Nevada. [7] He spoke on Panel 6: “The Right Climate Stuff” with Thomas Wysmuller and Walter Cunningham.

Harold Doiron is part of a group that calls themselves “The Right Climate Stuff” (TRCS). According to a comment by a user identifying himself as Harold Doiron on the SkepticalScience website, Doirin is the Leader and Chairman (Unconfirmed) of TRCS. [18]

On March 15, 2013,  Doiron, alongside Thomas Wysmuller, Walter Cunningham, and Heartland President Joseph Bast spoke at a panel discussion where they explain “why they are urging government agencies to cease their ‘unbridled advocacy’ of Anthropogenic Global Warming & Return Integrity to the Scientific Method.” [11]

In January 2013, TRCS issued a summary of its findings as follows (according to a press release issued by The Heartland Institute):

The group also presented at the Heartland Institute’s 7th International Conference on Climate Change (ICCC-7) in 2012 in Chicago.

At the debate, Harold Doiron described The Right Climate Stuff (TRCS) as a “Volunteer group.” He added,  “I think we’re very objective. We don’t belong to any special interest group. […] Our conclusion is humans are not (causing) a significant warming of this planet.”

In an interview with StateImpact, Harold Doiron described why he and 20 of his colleagues became involved in the group. In Doiron’s case, James Hansen was the trigger: “Well, the thing that really pushed me over the edge was the public statements of NASA’s chief climate scientist Dr. James Hansen,” Doiron said. [13]

Doiron registered as one of four former NASA scientists and astronauts to speak at the Heartland Institute’s Seventh International Conference on Climate Change (ICCC7). [4] Video footage from the NASA panel can be viewed below.

Doiron was one of 49 former NASA scientists to sign an open letter to NASA and the Goddard Institute for Space Studies (GISS) to cease their “unbridled advocacy of CO2 being the major cause of climate change.” [2]

SkepticalScience published a critique on the claims made in the letter, which was also republished in The Guardian. [5], [6]

Harold Doiron was a member of the organizing committee for the JSC NAL Symposium on Climate Change where he delivered the opening remarks (PDF).

“Our speakers today could be generally classified as being on the side of the debate that argues that Catastrophic Anthropogenic Global Warming (CAGW) is an unproven theory with very little credibility,” Doiron said.

Walter Cunningham was also a speaker at the event. [3]

According to a search of Google Scholar, Harold Doiron has not published in peer-reviewed journals on the subject of climate.

He has published some articles on engineering, space structures, and “space shuttle pogo prevention.”