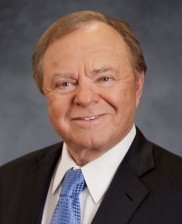 Hamm has been one of the dominant players behind the Bakken shale rush. “Hamm is the man who bought the Bakken, the shale formation that’s the biggest U.S. oil find since Alaska’s Prudhoe Bay in 1968,” Bloomberg wrote in 2012. Continental Resources is the largest leaseholder and one of the largest producers of oil in the Bakken of North Dakota and Montana. [5], [6] [7]

Hamm was reportedly a top pick for energy secretary by then-President-elect Donald Trump, however he turned down the job according to Fox News. In 2012, presidential nominee Mitt Romney had also considered Hamm for the position of energy secretary but ultimately decided against him. [8], [9]

Politico reported Hamm offered Trump advice “in an informal way” during his presidential campaign and that he had played a similar role for Mitt Romney in 2012 where he signed on as an energy adviser as well as donating $985,000 to a super PAC supporting Romney. [10]

At the Platts 2016 Global Energy Outlook Forum, an audience member asked Hamm what industry should do about climate change. Hamm responded by ignoring the fossil fuel industry, and focusing on irrigation: [11]

“You know, I’m an Earth scientist if you will, and I see a lot of things that are done by man that affects the climate.

You know, they have a very serious situation right now going on in you know Central Valley, California. You know, we’re not allowing the, you know, the almond growers and you know all the growers within the San Joaquin to use water […] and actually seeing, seeing good fertile, been green forever lands in the Central Valley of California being starved from water and basically going back to the desert. Returning it to the desert. We see the biggest climate changes due to man’s action within regard for that type of activity. Expanding deserts, for instance.” [11]

“Every time we can’t drill a well in America, terrorism is being funded.”

When contacted about its position on climate change in the context of its push to remove the oil export ban, a Continental Resources spokesperson told DeSmog the company “doesn’t take an official position on the issue.” [13]

Harold Hamm was a significant donor to Donald Trump‘s presidential campaign and was reportedly one of seven top donors who had choice seats at Trump’s inauguration. Trump has called Hamm “the “king of energy,” and said Hamm has “been amazing right from the beginning” in his assessment of markets, The Washington Post reported. [14], [15]

See below some of Hamm’s top recipients from 2000 to 2018, based on data retrieved from the FEC. See the attached spreadsheet for a complete list of Harold Hamm’s political recipients, dating back to 1986 (.xlsx).

“Anti-frackers are disingenuous. They bow to the religion of environmentalism,” Hamm said in an interview with NBC News. [16]

[…] “If you don’t have strong rule of law, you know, it deteriorates very, very quickly.”

[…]“We had a strong rule of law. We knew what that law was, and we abided by it. And it made us great.” Referring to Barack Obama, Hamm added “All at once, you’ve got a President that doesn’t stand up for the rule of law.”

Speaking with Fox News, Hamm declared he would not be pursuing a position in the Trump administration and was happy with his job heading Continental Resources: [9]

“I’m very excited about the fact that we can get back from the brink of extinction and have a future here in America as oil and gas producers,” he said.

“One thing is back off on some of the regulations,” he said. “It’s very costly to operate here in America compared to Mexico for sure. So back off on some regulations… a lot of those are punitive in nature… and make it where companies can produce their goods right here in America. And certainly taxes… I think that’ll be job number one as this administration goes forward.”

“I’m worried about our country. I’m worried about the direction it’s going,” Hamm said in an interview, quoted by Politico. Hamm criticized Democrats for “choosing to do away with all fossil fuels. That would put us right back into OPEC’s grasp.” He added, “We’re funding Islamic terrorism by buying oil from those countries.” [10]

“If you are opposed to the continued use of fossil fuels in the world, then you are not in the position to embrace the modern-day renaissance of oil and natural gas in America,” Hamm wrote at his now-defunct website. [18]

“Since President Obama’s election three and a half years ago, he and his administration have done everything in their power to stop fossil fuel usage, including a carbon tax, increased federal regulations, delays in federal permitting, infrastructure permitting denials for the Keystone XL Pipeline, capital starvation for drilling by the elimination of intangible drilling costs, and depletion allowance. […] At the same time, there are billions of dollars in subsidies being given to solar, wind and all other alternative sources of energy.”

”[…] The Keystone XL Pipeline and others need approval now, not continued delays. Producers need regulatory stability, not threats and lawsuits by the Department of Justice, nor increased regulations from all governmental agencies.”

“Thanks to the new tax law, Continental took home an extra $700 million because its effective tax rate for 2017 was negative 406 percent,” DeSmog’s Justin Mikulka reported. [19]

In Congressional testimony where he advocated for lifting the oil export ban, Hamm was asked about likely destinations for U.S. oil exports. [20], [21]

“I don’t see a lot of that trade happening,” Hamm responded.

DeSmog debunked another of Hamm’s arguments: that American allies like South Korea were “forced to buy” oil from Iran because they couldn’t buy American oil. “The reality is that multinational companies with foreign ownership are fracking for crude oil in the United States and now can sell it to the highest bidder on the global market — which often will be China,” DeSmog noted. [22]

DeSmog reported oil from Harold Hamm’s Continental Resources would flow through the contested Dakota Access pipeline. Hamm was also an outspoken supporter of TransCanada’s Keystone XL Pipeline, which he supported through the Domestic Energy Producers Alliance, a lobbying group he founded. After construction on Keystone was delayed for years, Hamm shifted focus. “We’re supporting other pipelines out there, we’re not waiting on Keystone. Nobody is,” Hamm told Politico in November 2014. [23]

The campaign, called “Miracle of American Oil,” pushed Congress and the White House to lift the oil exports ban. A document published by the Public Relations Society of America, discovered by DeSmog, revealed the oil industry courted mainstream media reporters to promote lifting the ban on crude oil exports to the American public and policymakers. [13]

The campaign, launched on December 16, 2013, won the PRSA Silver Anvil Award. According to documents submitted to PRSA regarding the campaign, it was “designed to influence public policy and/or affect legislation, regulations, political activities or candidacies — at the local, state or federal government levels.” [13]

The document also noted that Continental made an effort to move away from the term “fracking” and instead opt for the term “horizontal drilling”: [13]

“The PR team’s objectives to showcase the benefits of America’s oil and natural gas renaissance, change the vernacular from fracking to horizontal drilling, and launch crude oil exports to the top of the U.S. policy agenda were all achieved,” explained Continental in the document (emphasis added).

Bloomberg reported Hamm had requested the dismissal of a number of earthquake researchers at the University of Oklahoma Mewbourne College of Earth and Energy. The scientists were studying the links between oil and gas activity and the significant increase in earthquakes in the state. Hamm was a major donor to the university. [24]

He disputed the idea that he had tried to pressure the survey’s scientists:

“I’m very approachable, and don’t think I’m intimidating,” Hamm was quoted as saying in an interview with EnergyWire on May 11, “I don’t try to push anybody around.” [25]

However, a July 16, 2014 email by Larry Grillot, the dean of the university’s Mewbourne College of Earth and Energy, described Hamm as “very upset at some of the earthquake reporting to the point that he would like to see select OGS staff dismissed.” [24]

In an email from Hamm directed to Grillot, Hamm also expressed interest in sitting on a search committee. [24]

Hamm later filed a defamation suit against Oklahoma City oilman Mickey Thompson after Thompson wrote a post on his personal Facebook page that was critical of ham and accused him of trying to “squelch” science examining links between Oklahoma’s energy industry and earthquakes. [26]

Hamm testified at a Senate Energy and Natural Resources Committee hearing where he called for an end to the oil exports ban. “Americans and consumers of all nations would benefit from the immediate lifting of restrictions that inhibit the export of crude oil produced in the U.S.” Hamm’s statement read. [27]

A Reuters investigation revealed Domestic Energy Producers Alliance (DEPA), the lobbying group founded by Hamm, had made a successful lobbying push to have a $140 million extension, or spur, to the TransCanada pipeline. [28]

While Continental Resources had formerly opposed Keystone, fearing an influx of cheap Canadian oil, Hamm reversed course after approval of the extension which stood to benefit Continental by as much as $200 million per year. [28]

Hamm wrote an Op-Ed in Forbes where he “Lays Out His Vision For Energy Independence.” [29]

“If you are opposed to the continued use of fossil fuels in the world, then you are not in the position to embrace the modern-day renaissance of oil and natural gas in America,” Hamm began, before launching into an extended criticism of President Obama’s energy policies. [29]

“He and his administration have done everything in their power to stop fossil fuel usage, including a carbon tax, increased federal regulations, delays in federal permitting, infrastructure permitting denials for the Keystone XL Pipeline, capital starvation for drilling by the elimination of intangible drilling costs, and depletion allowance,” Hamm wrote. “All of these actions are designed to result in higher costs at the pump for the consumer. At the same time, there are billions of dollars in subsidies being given to solar, wind and all other alternative sources of energy.” [29]

In conclusion, Hamm called for the quick approval of the Keystone XL Pipeline. “Energy independence cannot be realized without new crude oil pipelines, other infrastructure,” he wrote. [29]

Continental Resources was one of seven oil companies facing criminal misdemeanor charges brought by the U.S. attorney in North Dakota for failing to prevent migratory birds from dying in the company’s waste ponds. The companies faced maximum fines of $15,000 per bird. Rather than settle the case, Hamm fought the charges in court. [14]

U.S. District Court Judge Daniel L. Hovland, a President George W. Bush appointee, dismissed the government’s case in 2012 concluding that oil drilling was a “legal, commercially-useful activity.” Criminal “taking” charges under the Migratory Bird Treaty Act should only be directed at hunters and poachers, he said. [14], [30]

Hamm described the charges as “patently wrong” and praised Hovland’s ruling as “a great victory for common sense.” [32]

Harold Hamm does not appear active on social media.