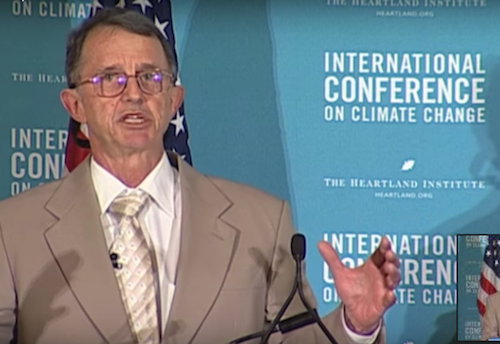 Willis Eschenbach is a regular speaker at the Heartland Institute‘s International Conference on Climate Change, where he is described as a “carpenter and house builder” as well as an “amateur scientist.” [17]

Eschenbach has previously worked as a Construction Manager at Taunovo Bay Resort in Fiji, Sport Fishing guide in Alaska, and more recently as an Accounts/IT Senior Manager with South Pacific Oil.  [1]

He is also a blogger at climate change denial blog Watts Up With That (WUWT), and his work is often referenced by Steve McIntyre‘s Climate Audit despite his having no credentials in any scientific field. [19]

In addition to his commentary on climate change, Eschenbach has a “modest proposal” for nuclear waste disposal: dropping hazardous materials to the bottom of the ocean in “low-tech […] nuclear lawn darts” and then “bury them and forget about them.” [22]

“I think that the preponderance of evidence shows that humans are the main cause of the increase in atmospheric CO2. […] I don’t think that the change in CO2 will make any meaningful difference to the temperature.” [2]

“’Sustainable Development’ is just an airy-fairy moonbeam fantasy, a New Age oxymoron. In the real world, it can’t happen.” [6]

“There might be some adverse outcomes from that eight tenths of a degree of temperature rise threatening my Grandchildren in 2050, but neither I nor anyone else knows what those outcomes might be. We’ll assuredly get an extra flood over here, and one less flood over there, it’s very likely to be drier somewhere and wetter somewhere else, in other words, the climate will do what climate has done since forever — change.” [4]

“Greenland is losing about 0.007% of its total mass every year … seven thousandths of one percent lost annually, be still, my beating heart […] And if that terrifying rate of loss continues unabated, of course, it will all be gone in a mere 15,000 years.” [3]

“The problem is that 71.3% of what passes as peer reviewed climate science is simply junk science, as false as the percentage cited in this sentence.” [5]

@WEschenbach posted the following on Jan. 6, 2021, the day of the failed Capitol insurrection in the US.

Willis Eschenbach was a speaker on “Panel 19” at the Heartland Institute’s Ninth International Conference on Climate Change (ICCC9) in Las Vegas, Nevada: [20]

DeSmogBlog did in-depth research on the other speakers and sponsors from Heartland’s ICCC9, which can be found here.  [18]

DeSmogBlog researched the co-sponsors behind Heartland’s ICCC7 and found that they had collectively received over $67 million from ExxonMobil, the Koch Brothers and the conservative Scaife family foundations. [21]

In a “A Modest Proposal for Nuclear Waste Disposal,” Willis Eschenbach argues that we should store solid nuclear waste at the bottom of the ocean: [22]

“In the ocean, at the very bottom of the ocean, that radioactive iodine will be immediately diluted among millions and millions of atoms of iodine which are already there.

Now, how to get the nuclear waste down to the ocean bottom and bury it there? I propose a very low-tech method, using nuclear lawn darts.”

In an update, after responding to comments, Eschenbach suggests that we “bury them and forget about them.”

Willis Eschenbach disputed the accuracy of the Berkely Earth Surface Temperature (BEST) project in an article at the skeptic blog Watts Up With That (WUWT). [7]

The BEST data had shown a similar amount of warming to NASA GISS, HadCRU, and NOAA surface temperature datasets, except that the project had received funding from private groups like the Koch brothers and included climate change skeptics Richard Muller on the team.

Initally, skeptic Anthony Watts had promised to accept whatever data the BEST study found, but once the data was released and proved to affirm global warming, he disputed it. [8], [9]

Willis Eschenbach’s own critique of the BEST data was examined by SkepticalScience and found to be lacking. [10]

Willis Eschenbach was a speaker at the Heartland Institute’s 2010 International Conference on Climate Change. [11]

Willis Eschenbach contends that Greenland has only lost a small fraction of it’s total ice mass. [3]

SkepticalScience examined this argument, and explains that “Multiple lines of evidence indicate Greenland’s ice loss is accelerating and will contribute sea level rise in the order of metres over the next few centuries.” [12]

Another of his arguments is that a change of only a few degrees will not likely be an issue to worry about. This is another argument debunked by SkepticalScience.

Willis Eschenbach was a speaker at the Heartland Institute’s Fourth International Conference on Climate Change. His speech was titled “How Clouds and Thunderstorms Control the Earth’s Temperature.” [23]

DeSmog concluded 19 of the 65 sponsors (including Heartland itself) had received a total of over $40 million in funding since 1985 from ExxonMobil, Koch Industries family foundations or Scaife foundations. [24]

Willis Eschenbach put forward a hypothesis that clouds and thunderstorms, particularly in the tropics, control the earth’s temperature. [13]

Note that his paper does not appear to be published anywhere but on the climate change skeptic blog Watts Up With That. [14]

SkepticalScience did a two-part analysis of Eschenbach’s theory, given that WUWT does not appear to have the benefit of peer review, and found “3 obvious mistakes” with his hypothesis. [15]

According to SkepticalScience, Willis Eschenbach has not published any papers in peer-reviewed journals that take a negative or explicitly doubtful stance on man-made climate change. [16]