Revealed: Here is what #ShellKnew about Climate Change in the 1980s

Shell knew climate change was going to be big, was going to be bad, and that its products were responsible for global warming all the way back in the 1980s, a tranche of new documents reveal.

The documents date back to 1988, meaning Shell was doing climate change research before the UN’s scientific authority on the issue, the Intergovernmental Panel on Climate Change, was established.

Here’s a quick run through of a 1988 document entitled, ‘The Greenhouse Effect’.

Climate Change Was Going to be Big

Shell was worried that should the issue of climate change become better known, public opinion may shift against fossil fuels and towards renewables, putting Shell’s business model at risk:

Shell acknowledged that climate change could lead to changes that were “the greatest in recorded history”. But the company also said that it may have recognised the problem “early enough for man to be able to anticipate and to adapt in time”:

Climate Change Was Going to be Bad

Shell also knew climate change was going have major impacts on the environment, anticipating that there could be “even local disappearance of specific ecosystems”:

Shell lists a number of areas that could be specifically affected by climate change, including:

The document also shows that Shell knew all of its products including coal, oil and gas significantly contributed to the problem:

There is even a table that outlines how much of global carbon dioxide emissions Shell’s products were responsible for in 1984: 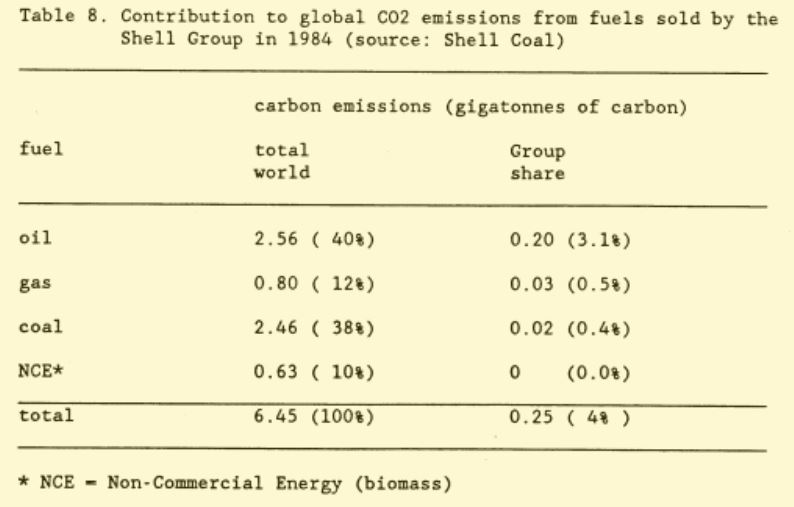 Shell was quick to push most responsibility for dealing with climate change onto governments. But the company did acknowledge that the fossil fuel industry would have to be part of the solution.

In one paragraph, Shell calls for “a forward looking approach by the energy industry”:

Shell also says the industry must “work out the part it should play”, and that the fossil fuel industry “has very strong interests at stake and much expertise to contribute” to addressing climate change:

You can read the full document with annotated highlights by De Correspondent and the Climate Investigation Centre here.