Comment: Why It's Too Soon for Newspapers to Claim Gatwick Disruption is the Fault of an 'Eco-Warrior'

Many newspapers this morning have speculated that the current chaos at Gatwick airport is down to an “eco-warrior”. Their basis for this claim? Almost nothing.

The Telegraph’s frontpage reads “Environmental protestors suspected of orchestrating Gatwick drone chaos”. The Times has an article headlined “Gatwick chaos: Eco-warriors may be behind disruption”, and The Sun declares that the “hunt continues” for “eco-warrior drone pilot”.

So that’s three of the UK’s biggest newspapers, including its most widely circulated, making the connection between this mass disruption and “eco” activists.

Even the Transport Secretary, Chris Grayling, mentioned this theory on the BBC‘s flagship current affairs programme.

So surely, they must all have a strong basis for reporting this?

The Sun says simply that “cops were working on the theory that a lone eco-activist was responsible”.

The Telegraph attributes this theory to “a Whitehall source” who says “an eco-protest is at this stage a definite line of inquiry”.

The Times doesn’t even attribute the speculation – nowhere in its article does it identify a source (of any kind) saying the responsibility lies with someone to do with the environmental community.

In fact, it even notes that “protestors are usually swift to claim responsibility for the disruption but no group had admitted operating the Gatwick drones by yesterday evening”. 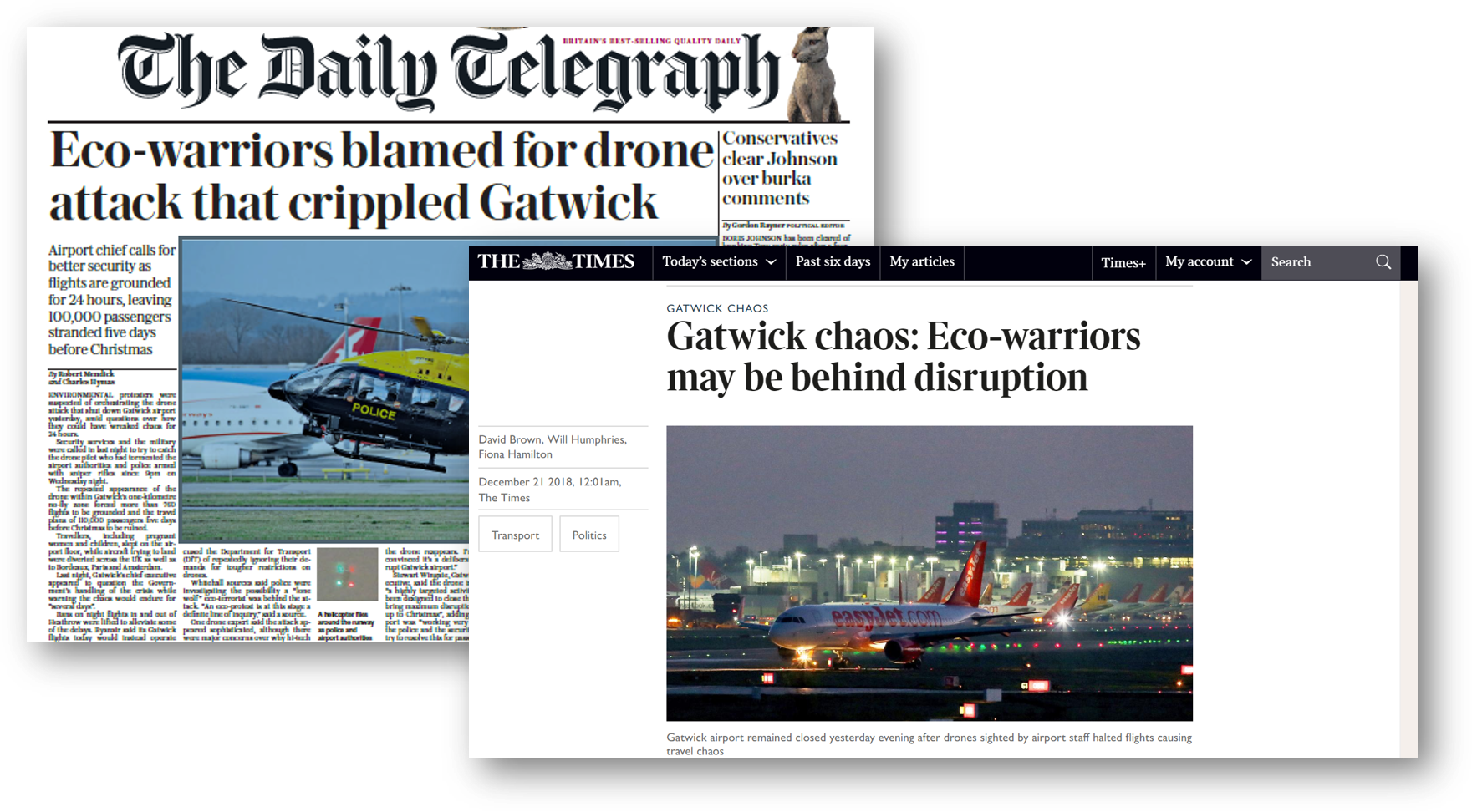 There’s probably a good reason for this. No sensible environmental campaign would think ruining thousands of people’s Christmas holidays (not to mention delaying the delivery of potentially important supplies over the holiday period) is a good way to win people around to their cause.

In The Times and Telegraph articles, the campaign groups Extinction Rebellion and Plane Stupid are name-checked along with a description of some of their greatest hits. Just to make sure the point hits home.

That’s depsite the fact that Extinction Rebellion has even gone so far as to publicly deny involvement:

Extinction Rebellion is not involved with the drones at Gatwick Airport. We’ve heard there are rumours circulating. We remind people that our actions are always ‘above the ground’ meaning we stand by our actions, are accountable and take the consequences #ExtinctionRebellion

So how on earth has this speculation hit front pages?

It seems no coincidence that these statements appear in outlets with a history of climate science denial and anti-environmentalism.

The police have been regularly quoted as stating that the theory it was someone related to environmental activism operation on their own accord was “one line of enquiry”. But the police have also stressed there are “several lines of enquiry”.

Beyond that, the timestamps of the articles offer some clue.

An article by climate science denier columnist James Delingpole for the far-right Breitbart website appears to have gone online at around 3pm on 20 December.

In that article, Delingpole speculates (and even he acknowledges it’s a speculation) that the Gatwick disruption could have been due to an environmental activist.

In his article, he asks:

“What kind of bastards would do such a cruel and heartless thing?”

“Well the local police appear to be ruling out ‘terror’. (Which is PC code for ‘something to do with Islam’.)”

“So my guess is that it is the work of eco loons.”

He then goes on to mention the activities of – you guessed it – Extinction Rebellion and Plane Stupid.

These groups are composed of people who have the “certain kind of psychopathology” needed to conduct an act of such disruption, he argues.

A few hours before, ‘Gaia Fawkes’, a wing of the Guido Fawkes political blog set up to attack environmentalism, tweeted:

Am suspicious and would not be surprised if the Gatwick drone disruption turns out to be the work of militant climate protestors.

We simply don’t know who is responsible for the Gatwick disruption. It could be a “lone wolf” who maybe identifies as an “environmentalist”. But we don’t know that.

And journalists are meant to report facts, not speculation.

This is at best bad journalism, and at worst something a lot more sinister.