Polly Higgins is a woman on the hunt. And you get the sense that, after decades of working towards holding powerful polluters to account, her prey may finally be in sight.

“They’re the ones where final responsibility rests for making the decisions that can adversely impact many hundreds of thousands, if not millions, and indeed — in the case of climate crime — billions of people.”

Climate activism is surging, with the school strikers chastising older generations for failing them, and Extinction Rebellion hitting headlines with its creative direct actions in the name of “climate justice”.

But Higgins has her own, more institutional approach to what she agrees is a looming climate crisis: making it illegal to deliberately destroy the environment. She is calling for the International Criminal Court in the Hague to recognise ‘ecocide’ as a crime against humanity, alongside genocide and war crimes. She explains:

“There’s a growing recognition that a lot of campaigning is not getting us where we need to go, and just saying fossil fuel extraction should stop is not enough. It has to be criminalised.”

That’s why, in 2010, Higgins proposed an amendment to the Rome Statute — the treaty that established the International Criminal Court. It defined ecocide as “the extensive damage to, destruction of or loss of ecosystem(s) of a given territory, whether by human agency or by other causes, to such an extent that peaceful enjoyment by the inhabitants of that territory has been or will be severely diminished.”

Some countries, such as the UK, have national climate change laws that set legally-binding emissions reduction targets. And many have regulations that are meant to protect the environment from corporate activities that could destroy ecosystems.

But none currently have sufficient legislation to allow companies to be taken to court, and treated as criminals, for damaging the environment purely for profit.

As Higgins points out: “We have laws that are protecting dangerous industrial activities, such as fracking, despite the fact that there is an abundance of evidence that it is hugely harmful in terms of carbon emissions, biodiversity loss, and the catastrophic trauma it can cause communities that are impacted by it.”

But if there was an ecocide law, it would allow lawyers and campaigners to argue that such polluting activities were “a potential crime against humanity.”

That may seem like a lofty ambition, particularly when the charge is being led by a small team from a one-room office in the quaint, pastoral and pleasant surroundings of Stroud. But renewed activism has shown there is a growing appetite to hold to account those responsible for the current and future impacts of climate change.

And the European Parliament last month held a hearing into Exxon’s decades-long support of climate science denial and lobbying, which followed fresh media revelations around Shell’s decades-old and hidden knowledge of the harm its products cause the climate.

Higgins is currently targeting Shell in particular. At the end of last year, her NGO, Mission Lifeforce, went to The Hague to announce that it would be undertaking an initial legal analysis to establish whether Shell could be guilty of ecocide.

She concedes that making that case won’t be easy.

“For us to establish that Shell — and indeed a whole industry — has undertaken a modus operandi that constitutes an inhumane act, there are a number of elements that we have to satisfy legally, one of them being intent.”

While the task will be difficult, Shell’s own actions could help to take it down. Citing the work of De Correspondent, the Climate Accountability Institute, and DeSmog, she says there are “a number of key points over time that suggest that Shell has decided to move forward with their industrial activities in the full knowledge of just how dangerous they are.”

She highlights recently-released documents that show Shell’s own internal scientific analysis revealed the dangers its products posed to the climate in the 1980s. Despite this, the company continued to fund groups that pushed climate science denial and failed to warn shareholders of the risks for decades.

It has taken years to get to what Higgins describes as “the first step” of holding these multi-billion dollar corporations to account. So what drives her to keep going — to keep taking on these hugely powerful opponents?

“I grew up in the countryside. I grew up loving the beauty of the wilderness of the west coast of Scotland. I spent my childhood holidaying in Wales. So I think it greatly informed what I’m doing now,” she says.

“It’s just part and parcel of who I am, and I think if you fundamentally care about people and the planet then it’s something you’re just not going to be able to walk away from.”

She’s motivated by protecting the people affected by major polluters, just as much as she’s driven to protect the planet itself. That means facing up to some big political powers as well as Big Oil.

An international ecocide law “is not something that most western world governments will sign off on,” she admits. “This is something that small islands that are most adversely impacted will want to have legal redress for, which kind of plays into the David and Goliath aspect of it.”

“Although it will impact the whole of humanity, those on the frontline tend to be the small island states such as Tuvalu and Vanuatu. And, for them, climate collapse is an existential humanitarian crisis. So they’re seeking ways to significantly abate the primary drivers of climate breakdown.” 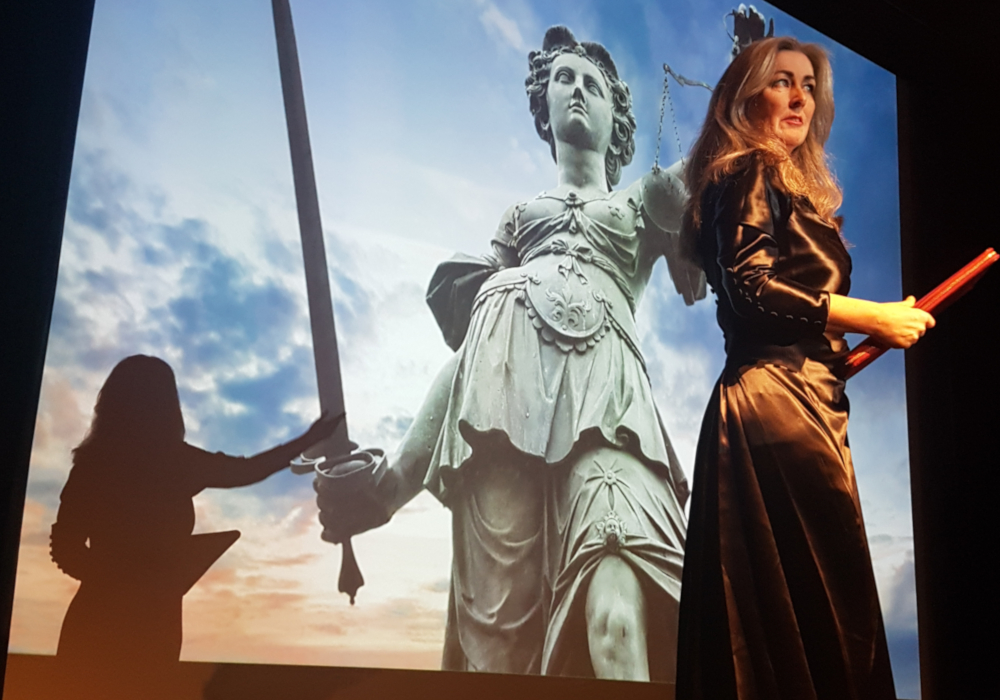 That’s why she’s targeting the International Criminal Court, where each member has one vote, rather than more cumbersome and potentially unjust institutions like the UN Framework Convention on Climate Change, where small countries can find themselves crowded out or bullied. Higgins sees a more permanent law, rather than delicate political solutions, as the best way to give calls for climate action some teeth.

A few weeks after we speak, Higgins is diagnosed with aggressive terminal cancer. It makes her efforts to create something more solid — a law, rather than a political solution — seem all the more pertinent.

Pushing for ecocide to be acknowledged as a crime is her way of “recognising that there’s a current absence of proper political leadership on this issue,” and “where political will fails then the law can prevail.”

“Ultimately all of this is preventable and that’s really what ecocide law is about.”

“It is fundamentally unjust to sit back and watch the destruction occurring,” she says.

Higgins is very good at explaining why an ecocide law could be effective, in theory. But there remain few mainstream campaign groups or political parties that back her cause. The UK’s Green Party in 2012 passed a resolution giving “wholehearted support for an international law of ecocide”. No other party has yet followed the Greens’ lead.

Higgins says that’s in part because hers is a movement that doesn’t wholly rely on public awareness “because it’s not the number one issue of concern,” she says.

Instead, she has worked on “discerning who are my allies in this, and how to take this forward working with them behind the scenes.”

That doesn’t mean public support for the idea isn’t useful — “it does help to have public support without a doubt,” she acknowledges — it just may not be necessary. If the International Criminal Court agrees with her, her job is done.

That’s why her focus is on forging a new tool for campaigners — an ecocide law — rather than courting them.

Her work has laid the groundwork for a new answer to those questions: For decades, people have taken to the streets. Thanks to Higgins’ work, perhaps one day, they will be able to take the prime suspects in climate atrocities to the criminal courts.Main image credit: Rupert Pessl ©