We’ve all heard the dodgy arguments: ‘the science is uncertain’, ‘climate change is natural, not down to humans’, ‘science has been hijacked by politics’… Now a new cache of documents sheds light on the origins of the disinformation.

In another verse of a now familiar refrain, a fossil fuel industry group in the 1990s publicly promoted arguments to undermine confidence in climate science while internally acknowledging their products were driving up temperatures.

A cache of meeting minutes, briefings, and emails uncovered by the Climate Investigations Center shows how industry group the Global Climate Coalition (GCC) used its financial clout and political connections to cast doubt on mainstream climate science until its disbandment in 2002. The GCC would for decades cast doubt on the veracity of climate science and strategically spread the message that the UN Intergovernmental Panel on Climate Change (IPCC) was a politicised body, to discourage regulatory reform that would hit coalition members’ profits.

The documents show that the group, which counted fossil fuel giants Exxon, Shell, and Peabody among its members, knowingly pushed misinformation on climate change even as the GCC internally acknowledged humans’ impact on the climate “cannot be denied”. Some of those same companies have been the recent targets of lawsuits seeking damages for climate change impacts.

“These documents are another stain on the fossil fuel industry’s track-record as a disingenuous rogue agent in climate science and politics,” Geoffrey Supran, a Postdoctoral Fellow at Harvard University researching climate science denial, told DeSmog. “They further illustrate the sophisticated combination of inside- and outside-lobbying used by the fossil fuel industry to protect their status quo business operations.”

Within the GCC, the Science and Technology Assessment Committee (STAC) took responsibility for assessing contemporary climate science and formulating strategic arguments to undermine it. The STAC was chaired by Mobil Oil’s Lenny Bernstein. Mobil, Exxon, and Texaco (now part of Chevron) all contributed five staffers to the committee.

The document concludes that “the claim that serious impacts from climate change have occurred or will occur in the future has not been proven” and “consequently, there is no basis for the design of effective policy action that would eliminate the potential for climate change.” 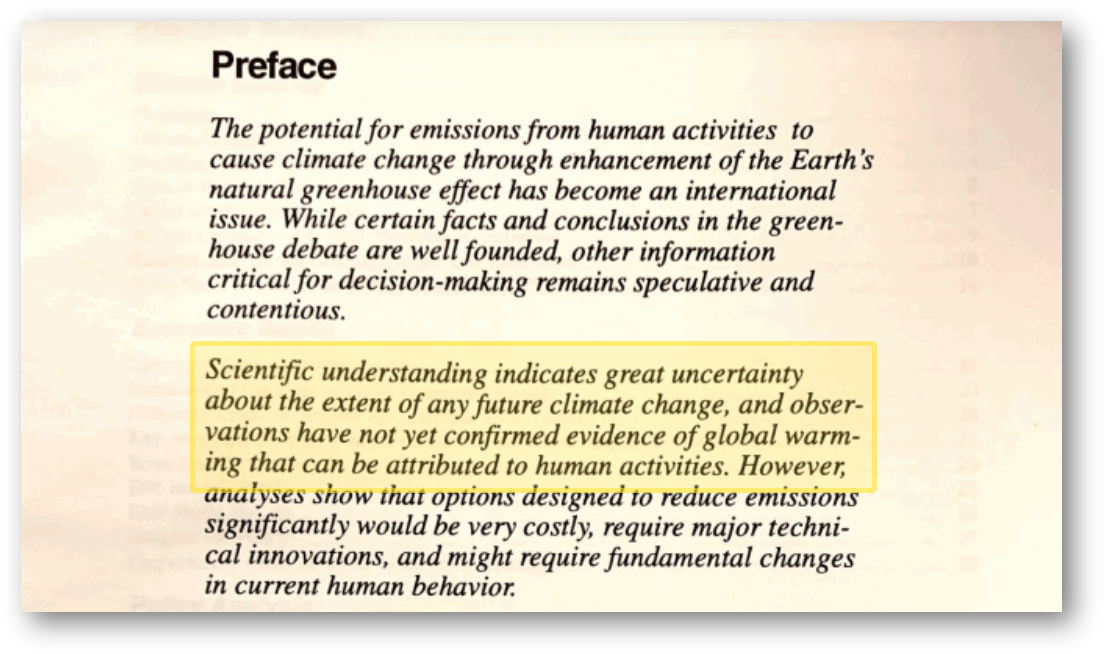 In the same document, the GCC cites the work of infamous academics known for spreading climate science denial including Richard Linzen, Patrick Michaels, and Robert Balling. The document asserts that these academics’ arguments disputing mainstream climate science  “have received far less attention than they deserve”.

A small-format pamphlet that the GCC distributed to the public in 1995 entitled “Climate Change: Your Passport to the Facts” states that:

“While many warnings have reached the popular press about the consequences of a potential man-made warming of the Earth’s atmosphere during the next 100 years, there remains no scientific evidence that such a dangerous warming will actually occur.”

A year-end briefing from 1995 also says: “The warming that has occurred to date is primarily at night and is within the range of natural variability. Some statistically significant ‘climate changes’ have been reported in some regions, but no credible scientific evidence exists which shows that these changes have been caused by human activity.” 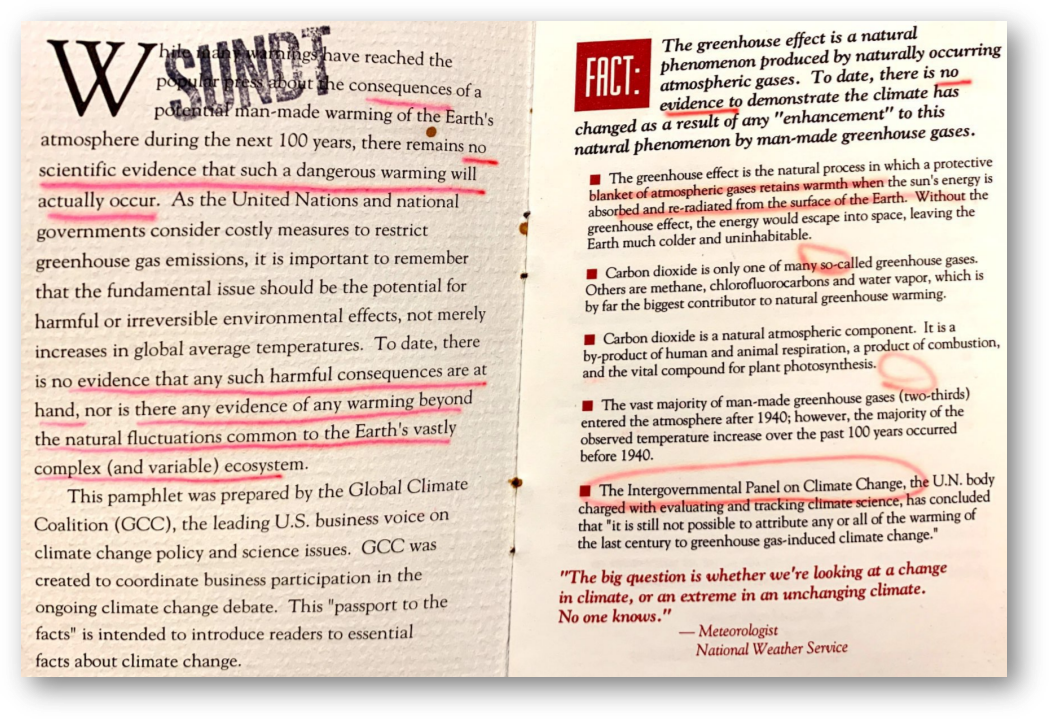 In that same year, however, the documents show that internally the GCC was beginning to accept anthropogenic global warming.

A note on a draft GCC primer on climate science from 1995 by Bernstein says “the scientific basis for the greenhouse effect and the potential impact of human emissions of greenhouse gases such as CO2 on the climate is well-established and cannot be denied.” Sections on “contrarian” science were subsequently removed from the report.

And in 1996, an overview of GCC work emphasised natural variation over human causes of climate change. While the document accepted that warming was occurring, “it is an open question however as to what the cause of this warming has been,” the document stated. The document also emphasised uncertainties in climate models — an argument the GCC would make in public many times.

This determination to focus on scientific uncertainties continued in a GCC conference call in April 1996, where members offered to write briefings on scientific inadequacies on five topics — models, sea level rise, solar variability, carbon dioxide, and temperature record and measurement.

Despite growing internal acceptance of humans affecting the climate, as late as 1999 the GCC was publicly promoting the argument that anthropogenic climate change was uncertain and overstated.

In a public ‘Climate Watch Brief’ newsletter, the GCC ended on two quotes suggesting anthropogenic climate change was an overblown idea. One, from astrophysicist Sallie Baliunas, succinctly summarises GCC’s position: those worried about global warming, she says, can “cool down”.

The GCC’s disinformation strategy extended beyond casting aspersions on the science to the process of gathering evidence for the major IPCC reports, the documents show.

Porter Womeldorff, an Illinois Power Company employee and co-chair of the STAC, suggested the group focus on the politicisation of the IPCC process.

And that’s exactly what the GCC did. In an internal document from 1996, the GCC boasted that its criticism of the IPCC’s processes had been picked up more widely by the mainstream media:

“Publications which have joined in questioning the IPCC approach to conforming technical reports to summaries include the NYTimes, Wall St. Journal, Energy Daily, and Nature.”

This followed a 1995 report that noted with glee a Nature editorial taking aim at the IPCC for a press-release that the erstwhile journal considered to be needlessly attention seeking.

Harvard’s Supran, who recently testified to the European Parliament about Exxon’s history of climate science denial, told DeSmog that the documents “help fill in pieces of the historical jigsaw of climate deception by the fossil fuel industry”.

“History teaches us that when it comes to the fossil fuel industry’s rhetoric on climate change and energy, we take them at face value at our peril.”