If there were a prize for the most bizarre climate mitigation idea, power company Drax Plc’s latest “green innovation” project would be a strong candidate.

Drax’s Yorkshire power station is the UK’s biggest carbon dioxide emitter and the world’s largest wood burner. It burns more imported wood every year than the UK produces, much of it sourced from the clearcutting of biodiverse, carbon-rich southern US forests.

Large amounts of energy are used to process the wood into pellets which are shipped across the Atlantic and burned at just 38 percent efficiency. Moreover, Drax burned around two million tonnes of coal last year and plans to build the UK’s largest-ever gas power capacity.

Drax brazenly claims that it has “a significant role to play in the transition to a low-carbon future” – without alluding to the fact that closing down its power plant would cut the UK’s carbon dioxide emissions by over 17 million tonnes a year. Last year, Drax announced that it wanted to go further and turn its plant into the “first carbon negative power station”.

It entered into a partnership with startup company, C-Capture, to try and capture one tonne of carbon dioxide daily. This carbon dioxide was to be sold to pubs to “help keep the fizz” in beer. As of May, the process was not working reliably, and no carbon dioxide was stored or sold. This is not surprising: C-Capture, though founded in 2009, had participated in no previous projects, obtained no patents and published no scientific studies. Instead of using a tried-and-tested solvent for capturing carbon, it chose to make its own, without disclosing any details.

Nonetheless, the Government has lavished £5 million on continuing the trial for another two years. It has done so because it endorses the idea that Bioenergy with Carbon Capture and Storage (BECCS) can remove carbon from the atmosphere. But can it?

Other than Drax, C-Capture, and a few other startup companies with no track record, no businesses have shown interest in developing BECCS, and for good reason: capturing and storing carbon dioxide from biomass-burning plants would be extremely expensive, technically challenging and, like other experimental technologies, require many years of continuous maintenance and replacement of equipment.

Based on experience with carbon capture from coal, around one third of a biomass power station’s energy would likely be needed to capture and compress carbon. Therefore, more trees would need to be cut and pelletised to generate less energy, pushing up the cost to the company and to forests. Even without carbon capture, Drax barely breaks even despite receiving £2.16 million in subsidies for burning wood every day. 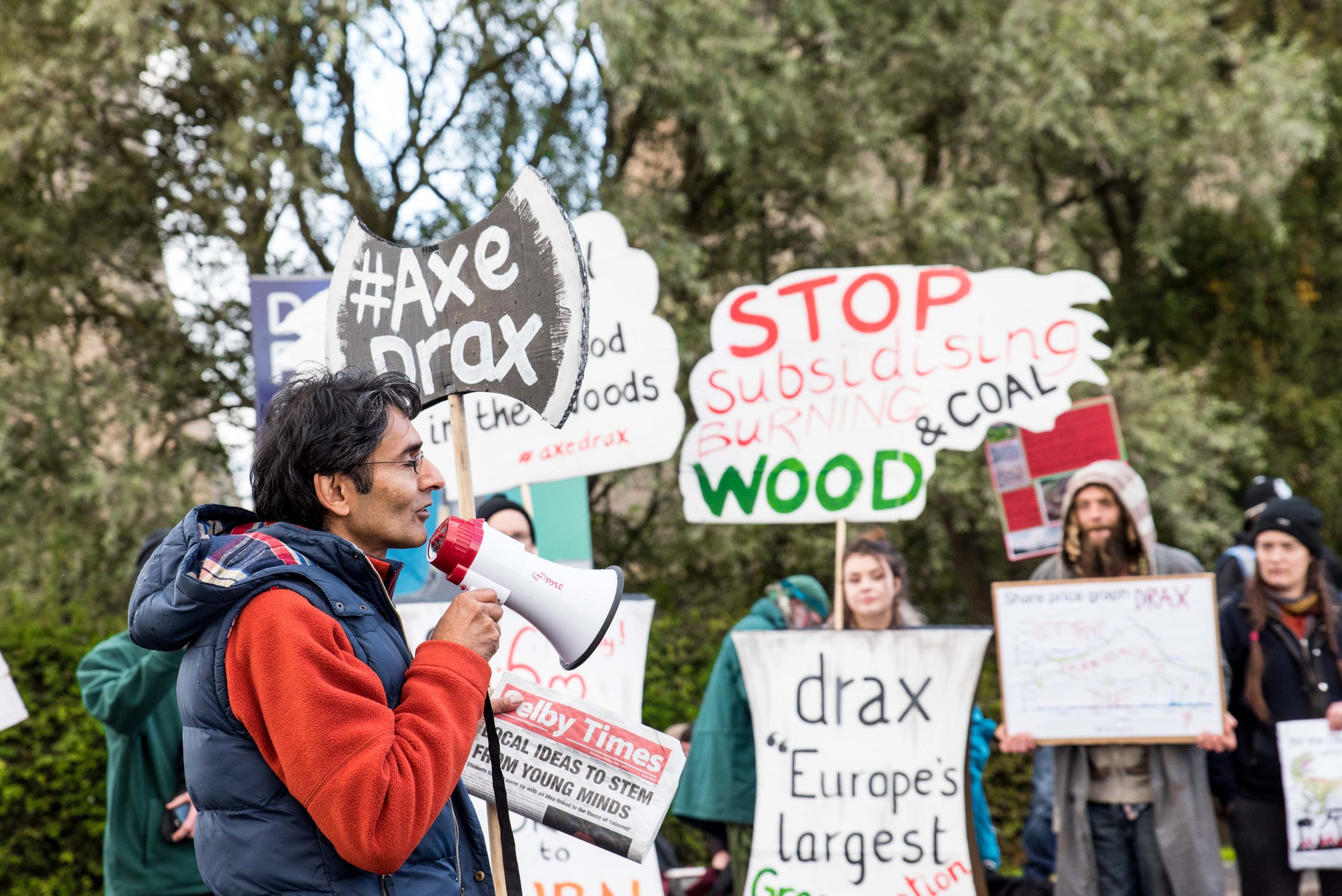 So why has the Government endorsed such an unproven, exceedingly expensive technology which, if it worked, would further increase pressure on the world’s dwindling forest ecosystems? To answer this question, we need to go back to 2005.

That year, Tony Blair convened a scientific symposium in Exeter to find out how catastrophic climate change could become and how it could be avoided. The findings presented raised alarm around the world. At the same time, the symposium showcased proposals for a host of deeply problematic technological solutions, from nuclear power to vast biofuel plantations, which would supposedly help stabilise the climate without harming economic growth.

Amongst the presenters was the late Peter Read, a leading proponent of the idea that humans could suck carbon dioxide emitted from fossil fuel burning out of the atmosphere by converting 500 million hectares of land to crops and trees, burning those for energy, and capturing and storing the CO2 emitted. The strategy, he and co-author Lermit declared, would be cheaper than capping emissions from the energy sector – particularly if most of the biomass needed was grown in Africa and Latin America.

Read’s idea was greeted enthusiastically. By 2007, the EU had included BECCS in its EU Flagship Programme for Carbon Capture and Storage (CCS), and, in the USA, the Department of Energy and Department of Defense were proposing large-scale production off synthetic fuels made from coal and biomass with CCS for “increasing security and reducing carbon emissions of the U.S. transport sector”. It was the heyday of enthusiasm for a biofueled future in the EU, USA and elsewhere.

From 2005 onwards, the concept of “negative carbon emission” through BECCS started to be picked up by modellers of climate stabilisation pathways. When the UN’s Intergovernmental Panel on Climate Change (IPCC) published its Fifth Assessment Report in 2014 it sparked huge policymaker interest in BECCS. In the report, 101 of the 116 models for stabilising carbon levels in the atmosphere which it cited relied on “negative emissions”, namely BECCS.

Enthusiasm for BECCS spread amongst policymakers: here was a technology, seemingly endorsed by the world’s top climate science advisors, which, according to Shell, would retain fossil fuels as the main energy source until the 2050s and see them play a significant role well beyond 2070 – and yet allow us to keep warming well below 2 degrees.

Ironically, as BECCS was gaining in popularity, the big biofuel vision on which the idea had been based had turned sour, as evidence of deforestation and land-grabbing for palm and soybean oil, used in biofuels, mounted, studies showed that most biofuels were worse for the climate than the fossil fuels, and biofuels were implicated in food price volatility, linked to global spikes in hunger and malnutrition.

Furthermore, businesses and governments worldwide went cold on CCS after a spate of expensive failures. There are two quite small coal-CCS units in North America, with no new commercial-scale ones being developed anywhere in the world.

Whilst the number of publications about BECCS has rapidly increased, there are – except for Drax’s experiments – no proposals anywhere in the world to try and capture carbon from biomass burning. For forests and climate, the absence of any real world BECCS projects is good news: forests are vital for storing and sequestering carbon, and the global demand for wood is already at highly unsustainable levels and thus one of the main underlying causes of forest loss worldwide.

Nonetheless, the inclusion of BECCS into climate policies is dangerous: because BECCS is unlikely to work and, if it did, likely to result in extra carbon dioxide emissions from increased logging and land conversion. Ultimately, the plan constitutes a large hole in net zero carbon strategies.

And unless false solutions are removed from climate policies, carbon reduction commitments will continue to mean very little.