The chair of a Welsh pro-Brexit group with three Conservative MPs on its advisory board is behind a “news and media” organisation promoting climate science denial, DeSmog can reveal.

Matthew MacKinnon, the chair of the Centre for Welsh Studies, is responsible for Eco Central, a new organisation pushing climate misinformation online and across social media.

David Jones MP, who is also Deputy Chairman of the European Research Group, and his Conservative party colleagues James Davies MP, Sarah Atherton MP, and Bay of Colwyn Councillor Arian Mason are on the advisory board of the thinktank, which is based in Cardiff. Patrick Minford, Professor of Applied Economics at Cardiff Business School, and Chair of Economists for Free Trade (formerly known as Economists for Brexit), is also on the centre’s advisory board.

MacKinnon was quick to distance the centre from Eco Central, claiming it is a project for a client of his Consulate Communications Consultancy. It is “strictly a private contract and does not have any link whatsoever with any work I or my colleagues do for the Centre for Welsh Studies”, he said. He did not reveal who the client was for which his consultancy runs Eco Central.

Its website does not reveal who is involved in the organisation, and its promoted Facebook posts simply say “sponsored by Eco Central”.

But the group’s Facebook advertising account is administered by MacKinnon. One of the page’s disclaimers, which are required when pages run adverts, is also from the Centre for Welsh Studies. The Centre and Eco Central also list the same address on their websites.

Facebook’s transparency data shows Eco Central has spent £3,666 on Facebook adverts since October 2018, with the Centre for Welsh Studies spending £365 on adverts for the page. The centre’s spend was from when the page was known as ‘Clean Brexit Cymru’ between January 2019 and May 2020.

The co-founder of the pro-Brexit Clean Brexit Cymru group is Callum Vaga, who worked as the Welsh Head of Press for The Brexit Party between October and December 2019. According to MacKinnon, the Facebook page was “gifted” to Consulate Communications as it was “no longer used” by Clean Brexit Cymru.

Eco Central reposts articles on its website that cast doubt on the science and seriousness of climate change, accompanied by an anonymous ‘Editor’s comment’. 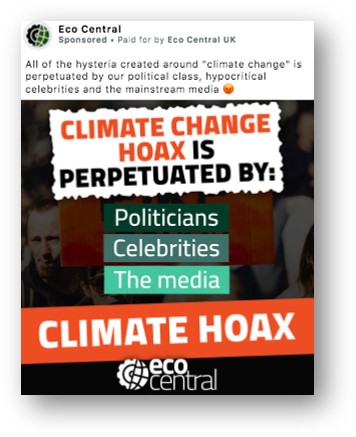 Headlines to their posts include “Global warming is fake science”, “Stop blaming climate change for California’s fires”, “the 97% climate consensus is fake news!”, “Don’t mess with mother Earth. Climate change is a hoax!”, and “Give thanks to fossil fuels”.

It has also attacked Prince Harry, Lewis Hamilton and David Attenborough for being “eco-hypocrites”, and has targeted the UK’s clean air measures with articles arguing the UK “should not bring forward plans to ban fossil fuel vehicles” and that measures to decrease car use would “increase pollution and cases of childhood asthma”. It also posted a Facebook advert that calls for people to “encourage car ownership”.

David Jones, Conservative MP for Clwyd West and Deputy Chairman of the pro-Brexit European Research Group, said that he “had no links” to Eco Central. He distanced himself from the climate science denying content the group posted, saying: “I am entirely satisfied that human activity is contributing significantly to global warming, and that it is clear that, for the sake of future generations, we must take what action we can to attempt to slow that process and to adapt to it.”

James Davies, Conservative MP for Vale of Clwyd, likewise said he has not heard of Eco Central and does “not support climate change denial”.

Eco Central’s Facebook page has over 1,500 followers, and it has spent almost £3,000 on 219 ads since it became active on June 9, reaching up to 1 million people according to Facebook’s advertising library. Despite the group’s Welsh connections, its ads are mostly shown to users in England, to men, and to those over 55 years of age.

One of the page’s “top fans” is Monima O’Connor, who sits on the Centre for Welsh Studies’ Advisory Board, and is described as a “political and animal welfare campaigner” who “spent 27 years working in the financial markets sector”.

Eco Central’s Twitter account only has six followers, including the Alliance of British Drivers, a climate science denying lobby group which has campaigned against the UK’s air quality measures.

The Centre for Welsh Studies is associated with a number of individuals and organisations that have campaigned for a hard Brexit.

MacKinnon was the former Welsh Regional Director of Vote Leave, and Nathan Gill, former Brexit Party MEP for Wales and former leader of UKIP Wales, who has previously said it is “ridiculous” to think humans could have an effect on the climate, is on the Centre for Welsh Studies’ advisory board.

The Economists for Free Trade has supported the argument that the free-market can solve climate change more effectively than governments, and the Taxpayers’ Alliance has long campaigned against a carbon tax.

The IEA published a report in 2018 that called for the UK to sacrifice environmental standards as part of post-Brexit trade deals. The report was authored by Washington lobbyist Shanker Singham, who now sits on the much-maligned Trade and Agriculture Commission, which advises the Department of International Trade on post-Brexit trade deals.