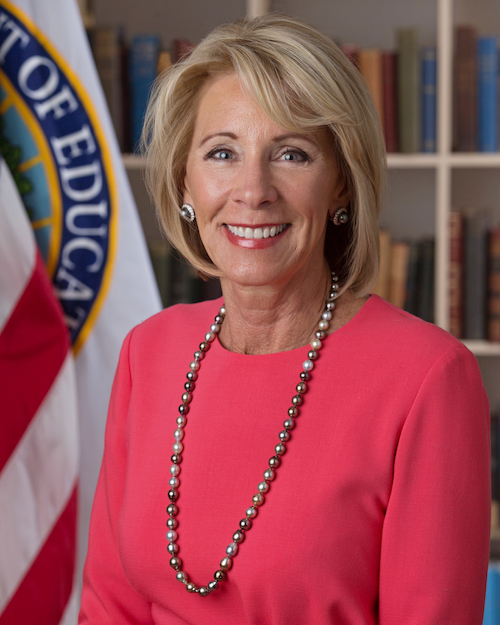 Betsy DeVos is the 11th United States Secretary of Education, appointed under President Donald J. Trump. DeVos was nominated for the position on November 23, 2016. [3]

Following strong opposition from Democrats, the Senate Committee on Health, Education, Labor and Pensions approved her nomination on January 31, and she was then confirmed by Senate by a 51-50 margin on February 7, 2017. Her confirmation marked the first time in U.S. history that a Cabinet nominee’s confirmation was decided on a tie-breaking vote by the vice president. [4], [5], [6]

DeVos is known as a strong proponent for the privatization of public schools and advocates a “school choice” voucher program that would give families taxpayer dollars to pay for private and religious schools. She has called the existing public education system a “government-run monopoly.” [3]

Betsy and her husband Dick DeVos are the billionaire heirs to the “multi-level” marketing company Amway. In 2016, Forbes listed the DeVos family as the 88th richest family in America at a net worth of $5.4 billion.

Before joining the Trump administration, DeVos was chairman of the Windquest Group, an enterprise and investment management firm. [7], [1]

DeVos is the sister of Erik Prince, founder of the private security firm formerly known as Blackwater.

Together, Betsy and her husband launched the Dick and Betsy Devos Foundation in 1989. Mother Jones reported that from 2000 to 2014, their foundation gave nearly $100 million with an “overwhelming emphasis on funding Christian schools, evangelical missions, and conservative, free-market think tanks like the Acton Institute and the Mackinac Center.” [30], [31]

Betsy DeVos’s name also appeared on the 990 forms of the Edgar and Elsa Prince Foundation, which she described as a “clerical error” during her confirmation hearing. The Prince foundation gave $2.7 million to the Family Research Council and over $4.4 million to Focus on the Family between 1999 and 2009, among other organizations on the “religious tight.” [13] [14]

The Washington Post reported that Jim DeMint, president of the conservative Heritage Foundation, praised Trump’s choice of DeVos, saying that “the school choice movement will have a champion in the Education Department.” [3]

American Federation of Teachers President Randi Weingarten said Trump’s pick “makes it loud and clear that his education policy will focus on privatizing, defunding and destroying public education in America.” [3]

U.S. Susan Collins, a member of the Senate Health, Education, Labor and Pensions Committee, said she would vote against the confirmation of Betsy DeVos as Secretary of Education. Watch Collins’s full statement below: [8]

“[…] like all of us, Mrs. DeVos is the product of her experience. She appears to view education through the lens of her experience in promoting alternatives to public education in Detroit and other cities where she has, no doubt, done valuable work. Her concentration on charter schools and vouchers, however, raises the question of whether or not she fully appreciates that the Secretary of Education’s primary focus must be on helping states and communities, parents, teachers, school board members, and administrators strengthen our public schools.

“While it is unrealistic and unfair to expect a nominee to know the details of all the programs under the jurisdiction of the Department of Education, I am troubled and surprised by Mrs. DeVos’ apparent lack of familiarity with the landmark 1975 law, the Individuals with Disabilities Education Act, known as IDEA, that guarantees a free and appropriate education to children with special needs.”

While DeVos hasn’t taken a strong stance on climate change, critics have pointed to her past support of Republicans who have denied that climate change exists. The Natural Resources Defense Council (NRDC) also worries that DeVos’s school voucher program could harm climate education by potentially funding “religious schools that promote creationism and deny climate change.” [9], [10], [11]

The following is a small sample of the Dick and Betsy Devos Family Foundation’s donations, based on information compiled by Conservative Transparency and combined with data from available 990 tax forms up to 2015. For a complete list, view the attached spreadsheet for details on all donations by the Dick and Betsy DeVos Family Foundation by year (.xlsx).

View available 990 forms below the table.

OpenSecrets reported that in the 2016 cycle alone, the DeVos family gave at least $10 million to a variety of GOP candidates and committees. (See tabbed spreadsheet here). Top 10 recipients of gifts by the DeVos family included: [12]

Betsy DeVos is daughter of Elsa Prince Broekhuizen and the late Edgar Prince. The Prince foundation gave $2.7 million to the Family Research Council and over $4.4 million to Focus on the Family between 1999 and 2009, as well as significant funding to other “Religious Right” organizations. [13]

In response to questions from Senator Maggie Hassan during a confirmation hearing, Betsy DeVos said she had nothing to do with donations made by her mother’s foundation to such conservative advocacy groups. DeVos asserted that the existence of her name on the 990 tax forms of the foundation was a “clerical error.” See the available 990 forms below. [14]

In 1983, DeVos’s father, Edgar Prince, contributed to the creation of the Family Research Council, which the Southern Poverty Law Center identifies as extremist because of its anti-L.G.B.T. language. [15], [16]

Politico noted that the Devos family have a history of supporting anti-gay causes. For example, they have donated hundreds of thousands to “Focus on the Family,” an organization devoted to changing a person’s sexual orientation. Focus on the Family has described a “second civil war” against LGBT rights, according to the Southern Poverty Law Center. [17]

Civil rights groups have said they are “deeply concerned” that DeVos will dismantle civil rights protections for gay and transgender students in place under Barack Obama’s Education Department. The groups noted that the DeVos family’s history of supporting anti-gay causes including groups promoting “conversion therapy.” [18]

“If Betsy DeVos is to serve as our nation’s Secretary of Education, she must clarify whether she shares her family’s support for this abusive practice, or if she’ll pledge to work to ban it,” said Chad Griffin, president of the Human Rights Campaign. [18]

“The DeVos family has a long, well-documented history of funding organizations dedicated to undermining and restricting the rights of LGBTQ people,” he said.  [18]

The Richard and Helen DeVos Foundation was founded by Betsy Devos’s father-in-law, Richard and his wife Helen. According to data from Conservative Transparency, this foundation has also given millions of dollars to conservative and “religious right” causes, including over $13 million to The Heritage Foundation, $6.5 million to DonorsTrust, and $500,000 to the Mercatus Center, with funding data up to 2013.  See original 990s below. [32]

Politico reported that, at a 2001 meeting of Christian philanthropists titled “The Gathering,” DeVos described education reform as a way to “advance God’s kingdom.” [17]

They said that school choice would lead to “great Kingdom gain” and that public schools have “displaced” the Church as community centers:

“My family is the biggest contributor of soft money to the Republican National Committee. I have decided to stop taking offense at the suggestion that we are buying influence. Now I simply concede the point. They are right. We do expect something in return. We expect to foster a conservative governing philosophy consisting of limited government and respect for traditional American virtues. We expect a return on our investment.” [19]

Nearly 100 internal documents were leaked to Axios in 2019. As Axios reported, the documents identified a host of “red flags” about many individuals who would go on to work in the Trump administration, as well as others who were considered but failed to secure a position. [33]

DeVos was listed among the documents. Some notable samples from the internal documents below:

“Betsy DeVos Said She Had Reservations About Trump ‘As A Person,’ And Also Doubted His Demeanor.”

“In 2008, The Ohio Elections Commission Unanimously Ruled That DeVos’ Group, All Children Matter, Illegally Funneled $870,000 In Contributions From Its Virginia PAC To The Ohio Affiliate.” [33]

Betsy DeVos attended her confirmation hearing for secretary of education. View the full hearing below.

The Washington Post noted some of Devos’s responses “created more questions than they answered.” For example, in response to a question on whether guns should be allowed in schools, DeVos responded by citing that they could help protect children “from potential grizzlies.” [20]

When asked about how much money her family had given to the Republican Party over the years, she acknowledged that they probably gave somewhere in the range of $200 million, but said she was unsure of the exact number. [20]

DeVos was asked whether she was a board member of her mother’s foundation, which public 990s had listed her as chairman until 2013. DeVos responded that this was a “clerical error.” [20]

DeVos hired Scott Jensen to work on behalf of her group, American Federation for Children (AFC), the 501(cc)(4) arm of Alliance for School Choice. This hiring was despite Jensen having been charged with three felonies and a misdemeanor for misconduct in office in 2002. [21]

In 2005, Jensen was tried and convicted on all counts. The presiding judge told Jensen “what you did was a great wrong to the citizens of this state” because “You used your power and your influence to run an illegal campaign funding operation.” Jensen was sentenced to five years which included 15 months of confinement along with supervised release. However, despite the conviction and losing his office in the legislature, DeVos retained him during the next five years. In 2010 he won an appeal of his conviction and pleaded misdemeanor crime to settle the case. [21]

DeVos and her husband produced the Broadway stage play titled Scandalous: The Life and Trials of Aimee Semple McPherson. [28], [29]