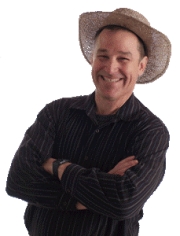 Bruno Wiskel, better known as “The Prosperous Farmer,” is a public speaker with a background in geology.

From “The Sky Is Not Falling” pamphlet (PDF):

“Bruno Wiskel Graduated from University of Alberta in 1983 with a BSc. (Honours Geology). After receiving his professional accreditation with the Association of Professional Engineers, Geologists and Geophysicist of Alberta (APEGGA) in 1986, Bruno spent the next 20 years of his career as consulting geologist involved in oil & gas, base & precious metal, and gemstone exploration and now specializes in environmental law…”

“Are you tired of the hysteria surrounding the climate change question? Do you believe that environmental groups are on the take and are simply using global warming to line their pockets? Do you think the doubt the science that the alarmists of the world are presenting? If you answered yes to any or all of these questions, then ‘The Sky Is Not Falling – Putting Climate Change On Trial’ is definitely the book for you.” [2]

“If this happened once and we were the cause of it, that would be cause for concern. But glaciers have been coming and going for billions of years.” [3]

Wiskel hosts a regular speech on global warming titled “The Sky Is Not Falling — Putting Climate Change on Trial” which appears based on Bruno’s similarly-titled book.

According to the brochure (PDF), “Using scientific logic, he [Wiskel] will dispel every misconception you ever had about climate change.”

Registration for the speech is through the Frontier Center for Public Policy (FCPP), and they appear to be a sponsor of the event.

Wiskel appeared in a documentary, “Trading on Thin Air,” where he claims that he “challenged every aspect of the climate change.” He appeared alongside other prominent skeptics including Christopher Horner, Lawrence Solomon, David Evans, and Joanna Nova.

Note that while the film “Trading on Thin Air” does not explicitly promote climate change skepticism, it did feature the viewpoints of the prominent skeptics named above.

Wiskel made his presentation, “The Sky Is Not Falling – Putting Climate Change on Trial” to the Canadian Society of Petroleum Geologists (CSPG). He subsequently released the presentation on DVD.

According to a search of Google Scholar, Wiskel has not published any articles in peer-reviewed journals on any subject.

Some of his other publications include:

Wiskel operates a blog titled “The Emperor’s New Climate” where he publishes his skeptical views about man-made climate change.