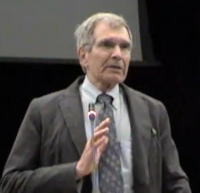 Charles Battig is a retired physician with a postgraduate degree in electrical engineering. In 2009 he was appointed president of the Piedmont Chapter of Virginia Scientists and Engineers for Energy and Environment (VA–SEEE) by S. Fred Singer.

VA–SEEE, described as a “grassroots organization,” was founded by climate change skeptic Fred Singer who is also president of the Science and Environmental Policy Project (SEPP). The VA SEEE appears closely related to SEPP and is also connected to the “Climate Chance Reconsidered” report of the Nongovernmental International Panel on Climate Change (NIPCC). [2]

According to his bio at the Jefferson Area Tea Party, Battig “has pursued an active interest in climate issues prompted by the discovery of a rich history of climatologists here: Professor S. Fred Singer, Patrick Michaels, Dennis Avery, and M. Mann, and the lack of local coverage of the topic other than the Al Gore catastrophe promotion.” [1]

According to Battig’s website, “As there was no active local voice countering the ‘Al Gore’ version of climatology, I decided to become the local a ‘climate reality’ activist.” He has regularly attended the Heartland Institute‘s International Conferences on Climate Change. [3]

“Soon to be ex-president Obama is throwing as much sand as possible into the energy machinery on his way out the door.  What can only be interpreted as a petulant and defiant act of sabotage, he is poisoning the well of energy and environmental reform promised by president-elect Trump.” [19]

“Countering this climate doomsday propaganda has been a number of scientists and independent organizations. Manipulation of the historical temperature record by our own government agencies has been documented. Such revisions serve to make the historical record conform to the political aims and views of our Federal government, that global warming is occurring and is linked to fossil fuel use.  Proliferation of internet access has provided the new open public soap box, independent of traditional media, itself fully in the climate panic mode. Web sites maintained by Anthony Watts, Marc Morano, and Steve Milloy are just a few of many striving to get the unpoliticized science before the public.” [13]

“The vigor with which both the Church and the EPA have linked their common belief and dogmatic position that mankind is the prime driver of climate change should concern those staunch defenders of the doctrine of “separation of church and state.’” [15]

“Global temperatures are but one of several imperfect gauges to define the vague entity popularly termed climate, but they are widely referenced as the prime indicator.” [12]

“Mankind and nature can both benefit by the intelligent development of natural resources needed by a growing global population. Cordoning off resources at one location leads to greater potential environmental damage at another.” [6]

“It is proclaimed that failure to impose a new, worldwide energy rationing system and wealth redistribution scheme will provoke a global climate meltdown. A global government is promoted to administer the redistribution of wealth and energy. Government, industry, research institutions and the financial community are giddy with the prospects of a trillion-dollar-a-year funding source. Our own government is pushing ‘cap and trade’ as necessary because ‘the science is settled.’

“There may be ample reason now to believe there is ‘something rotten in the state of Denmark.’

“The scientific community and the public deserve a full and open investigation of the data behind the conclusions made to support the global-warming theory.” [5]

Battig was among a group of climate change deniers who responded with their own open letter, calling for the AMNH “not to cave in to this pressure.” The letter was signed by numerous individuals with ties to groups funded by the Mercer Family Foundation such as Will Happer of the CO2 CoalitionRichard Lindzen, a fellow at the Cato InstituteCraig Idso, the chairman of the Center for the Study of Carbon Dioxide and Global Change. There are a number of signatories affiliated with the Heartland Institute, which has received over $5.78 million from the Mercer Family Foundation since 2008. [29]

Charles Battig was a signatory of a petition (PDF) organized by Richard Lindzen of the Cato Institute urging President Donald Trump to pull the United States out of the United Nations international convention on climate change (UNFCCC). [23]

Media outlets including Fox News, The Hill, and the Daily Caller reported on the list, describing signatories as “eminent scientists” and “qualified individuals.” [24], [25], [26]

DeSmog investigated the list, and found that only a small handful of the signatories could be considered “even remotely ‘qualified’ or ‘eminent’ — but not in the field of climate science.” The list included individuals “interested in climate,” and one signatory who only identified as an “emailer who wished to sign the petition” while some signers provided no affiliation or address whatsoever. [27]

Charles Battig was a signatory to a Cornwall Alliance open letter supporting Scott Pruitt for EPA Administrator under the Trump administration. [20]

Pruitt was further grilled on his fossil fuel ties at his confirmation hearing on January 18. [22]

Charles Battig went on the “Freedom & Prosperity Radio” show hosted by the Virginia Institute for Public Policy and Tertium quids to talk about the benefits of carbon dioxide (audio of full 1 hour program below): [18]

“Dr. Charles Battig discusses: the positive effects of carbon dioxide without which plants would die closely followed by the human race; and how according to the satellite data, there has been no global warming for the last 18 years.  Dr. Battig also asks if the environmentalists are so certain of their positions, why do they: refuse to debate, make personal attacks on opponents, refuse to release their data, and try to limit the freedom of speech of those who disagree with them.  Aren’t these actions more typical of the side that realizes it holds a losing hand?  Of what are they afraid other than losing their federal research bribes, er, grants?” reads the event program.\

Charles Battig was a speaker on Panel 8: “Human Health and Welfare,” at the Heartland Institute’s Tenth International Conference on Climate Change (ICCC10) in Washington, D.C., with James Enstrom and Stanley Young. [16]

Charles Battig was a guest blogger on Watts Up With That, writing on “Climate Change Hysteria and the Madness of Crowds.” The article claims manipulation of data by government agencies in order to “conform to the political iams and views of our  Federal government, that global warming is occurring and is linked to fossil fuel use.” [13]

According to Battig, “Web sites maintained by Anthony Watts, Marc Morano, and Steve Milloy are just a few of many striving to get the unpoliticized science before the public.” Steve Milloy has been the Director of External Policy and Strategy for one of the largest privately-owned coal producers in the United States, and maintainer of JunkScience.com. Milloy has been associated with major tobacco companies since 1997, where we was also executive director of The Advancement of Sound Science Coalition (TASSC).

Battig compares mainstream climate change science to a “disease pandemic” that will “burn itself out,” while climate change skeptics face an “uphill fight against the propensities of human nature and the madness of crowds.”

Battig was a speaker at the Heartland Institute‘s Seventh International Conference on Climate Change (ICCC7).

His speech, titled “Achieving Public Policy Results” can be viewed below.

DeSmogBlog researched the co-sponsors behind Heartland’s ICCC7 and found that they had collectively received over $67 million from ExxonMobil, the Koch Brothers and the conservative Scaife family foundations. [17]

Spoke at a SEPP/VA–SEEE forum with fellow climate change skeptics Fred Singer and Kenneth Haapala. The topics included the “status of global warming science and the divergence between models and observations.” [7]

Battig was a guest speaker at a joint meeting of SEPP and VA–SEEE at Virginia  Commonwealth University that introduced the 2011 report of the “Nongovernmental International Panel on Climate Change” called “Climate Change Reconsidered.” [8]

The Albemarle County voted to end the county’s membership in the Cool Counties initiative, a nationwide non-binding agreement that suggests steps to reduce energy use and carbon emissions and sets a goal of 80 percent carbon dioxide emission reductions by 2050.

This was after opposition by Charles Battig among others who opposed the initiative. [10], [11]

He has not published any articles in peer-reviewed journals on the subject of climate change.