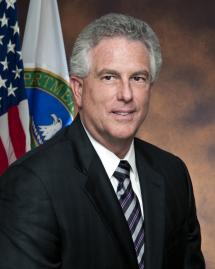 Charles McConnell was appointed by President Barack Obama to serve as Assistant Secretary for Fossil Energy at the U.S. Department of Energy, an office he held from 2011 to 2013. [2]

Prior to government service, Charles McConnell spent more than three decades with Union Carbide, where he was a managing director for Asian markets. After Union Carbide’s acquisition by Praxair, McConnell led its Hydrogen and Carbon Monoxide programs and was involved in coal technology development and government lobbying. [2], [3]

After retiring from Praxair as a global vice president in 2009, McConnell spent two years with Battelle Energy Technology as VP of Carbon Management. [2], [3]

In testimony given to the House Committee on Science, Space, and Technology’s Subcommittee on Environment on May 26, 2016, McConnell stated:

“Let me be very clear. First, I believe that the climate is changing. I am not in denial. Second, CO2 is a contributor or ‘forcing function’ for climate change – certainly not the exclusive forcing function, but a major contributor – and it does require an energy strategy in this country and globally to address the long term implications. These two facts, I believe, are scientifically and technically documented and we have an obligation to address them as a society. With that said – what is also clear both scientifically and technically is that the EPA’s CPP is not a plan that will significantly impact global CO2 emissions. It’s not an environmental regulation, it is energy regulation. If the definition of ‘clean’ were the reduction of atmospheric CO2 levels – and that is a naively narrow, incorrect perspective, but if it were – then this CPP is not really clean, because it is neither relevant nor impactful to the environment.” [4]

In an op-ed for the Texas Tribune, McConnell questioned the reliability of renewable energy as a replacement for fossil fuels and nuclear power:

“I feel strongly that federal regulators need to correct past mistakes, ensure the long-term sustainability of our power grid and pursue a diverse portfolio that ensures resiliency, reliability, affordability and sustainability that keeps our country so strong and vibrant. I believe that should include coal and nuclear power.” [5]

In an opinion piece for Morning Consult, McConnell proposed an “all of the above” energy strategy for the United States that balanced reliability with environmental concerns:

“I believe CO2 plays a role in climate change, but controlling its output cannot be the exclusive definition of environmental responsibility. We have to be honest about both environmental considerations and the necessity of power sources that can produce energy on demand.” [6]

“There is no denying that wind and solar power are important to a balanced energy portfolio. But coal is the bedrock of affordable electricity, and it will remain so, no matter how much wishful thinking by environmental activists. Coal is abundant and reliable. Unlike wind and solar, coal generation can be dialed up and down in response to market conditions and to satisfy demand.” [7]

In a commentary for Forbes.com, McConnell suggested a decline in coal and nuclear power generation would make the United States vulnerable to energy shortages:

“Coal and nuclear plants are unmatched in their ability to generate reliable energy under all circumstances, but these plants are being retired at an alarming rate because of a combination of punitive regulations, low natural gas prices, and government subsidies and mandates for renewables.” [8]

Appearing at the Portsmouth Conference in New Hampshire, McConnell suggested an industry-friendly alternative to carbon taxation:

“Industry needs to have a stake in this – it needs to be in some ways rewarded, incentivized and also more than encouraged to go down that road.” [9]

In an op-ed for the Washington Examiner, McConnell defended President Trump’s nominee to lead the White House Council on Environmental Quality, Kathleen Hartnett-White:

“Kathleen has been nominated by President Trump to chair the White House Council on Environmental Quality, and she is being questioned and challenged – not for her record, and not for her qualifications, but because she has refused to define environmental quality and economic development as mutually exclusive.” [10]