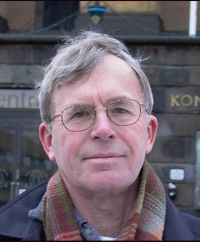 Claes Göran Johnson is a professor of applied mathematics at the Royal Institute of Technology in Stockholm, Sweden. He has produced a series of books titled Applied Mathematics: Body and Soul and has published other work in the area of computational mathematics, finite element methods, mechanics and physics. [2]

“…climate sensitivity as global warming by doubled CO2, can
be estimated to be smaller than 0.3 °C, to be compared with the 3 °C estimated by IPCC, on the basis of the inflated radiative exchange from 60 to 500 W/m2 resulting from fictional back radiation/DLR.” [3]

“If thermodynamics is the main mechanism of the atmosphere as an air conditioner or heat transporter, then CO2 will not cause warming, and IPCC climate alarmism collapses.” [4]

Claes Göran Johnson was a signatory of a petition (PDF) organized by Richard Lindzen of the Cato Institute urging President Donald Trump to pull the United States out of the United Nations international convention on climate change (UNFCCC). [7]

“In just a few weeks, more than 300 eminent scientists and other qualified individuals from around the world have signed the petition below,” Lindzen wrote in the letter.

DeSmog investigated the list, and found that only a small handful of the signatories could be considered “even remotely ‘qualified’ or ‘eminent’ — but not in the field of climate science.” The list included individuals “interested in climate,” and one signatory who only identified as an “emailer who wished to sign the petition” while some signers provided no affiliation or address whatsoever. [8]

However, the invitation for this event was not sent. According to communications with SEII president Philippe Wauters, the event was initially canceled because the event organizer Henri Masson did not follow proper procedures or notify SEII board members before setting up the conference in their name.

Some suggest the cancelation was influenced by a letter written by Jean-Pascal van Ypersele to the Fondation Universitaire that had pointed out Fred Singer’s fossil fuel funding, saying that it would be “scandalous that such a person could be remotely or closely associated with the SEII and to the Fondation Universitaire.” However according to Wauters, this letter was sent after SEII directed Masson to reclassify his event as a private meeting.

The private meeting was by invitation only (PDF) with the seminar titled “Critical Thinking & Complex Systems Analysis applied to the Controversy Climate Change.” [6]

Video of the seminar is available here and here.

Johnson presented on “CO2 Climate Alarmism Debunked by Mathematics” (.ppt) which offers the conclusion that modern climate science may be the “biggest scientific fraud ever” citing supposed manipulation of data. According to his last PowerPoint slide, Johnson suggests that the blogosphere is the perfect “arena of skepticism” because it cannot be censored.

While Johnson has a significant number of citations on Google Scholar, it appears he has co-authored only one journal article in the area of climate science titled “Basic Thermodynamics of the Atmosphere,” published in Relation in 2010. Upon closer inspection, the original source of the article appears to be Johnson’s personal website, and there is no detailed reference of any scientific journal by the name of “Relation.”