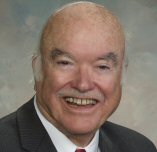 Dr. James McGrath is a former professor of chemistry at Virginia Tech and past co-director of the Polymer Materials and Interface Lab (PMIL) at Virginia Tech. James E. McGrath passed away in May of 2014. [13], [2]

McGrath was one of sixteen “scientists” who signed an inflammatory Wall Street Journal opinion piece titled “No Need to Panic About Global Warming” that stated: [5]

McGrath is one of 16 scientists who appended their signatures to a Wall Street Journal article titled “No Need to Panic About Global Warming.” [5]

Interestingly, 255 members of the United States National Academy of Sciences wrote their own essay, this on the realities of climate change, which had been rejected by the Wall Street Journal in favor of the sixteen-scientist letter. [11]

Media Matters also reported on the article, and also found that most of the scientists who signed the Op-Ed “Do Not Actually Publish Peer-Reviewed Climate Research.” They also contacted Yale Economist William Nordhaus who had been cited by the article, and he replied that it was a “Complete Mischaracterization Of My Work.” [12]

McGrath is listed as a signatory to the Oregon Petition which has been used by climate change deniers as proof that there is no scientific consensus on man-made global warming. [14], [6], [7]

The petition was published in April 1998 by Art Robinson and his organization the Oregon Institute of Science and Medicine, along with the George C. Marshall Institute (known to be funded in part by ExxonMobil).

According to the May 1998 Associated Press article, the Oregon petition included names that were intentionally placed to prove the invalid methodology with which the names of scientists were collected. [8]