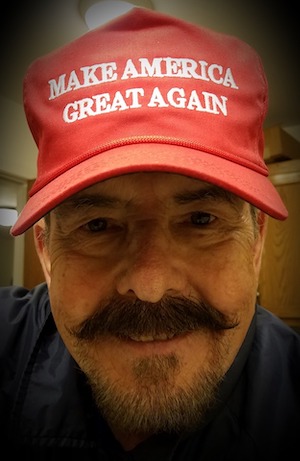 James A. Peden is the webmaster and editor of Middlebury Networks/Middlebury Community Network where he offers web design and hosting services. [9]

In his profile at Middlebury, Jim writes he “started adult life as a research Physicist and Mathematician.” His other occupations have included “ski instructing, crop dusting, flight instructing, graphic arts… and even a short hitch as a law clerk” and more recently real estate. [9]

Peden has listed himself as a retired atmospheric physicist at the Space Research and Coordination Center in Pittsburgh and as having worked with Extranuclear Laboratories in Blawnox, Pennsylvania while “studying ion-molecule reactions in the upper atmosphere.” The Space Research and Coordination Center was a center for students studying numerous disciplines related to the aerospace field at the University of Pittsburgh. [10]

In an article posted at Middlebury, Peden describes global warming as a “hoax” and claims “the science [is] far from settled” regarding climate change. [1]

The great global warming hoax is extremely sophisticated, and relies on a very subtle reversal of the Second Law of Thermodynamics.

It appears tailor-made to dupe those of marginal intelligence or no scientific understanding.

The great global warming hoax is based on the notion that the foolish half of civilization can be brought to believe that heat can naturally flow from cold to hot.

People of lower intelligence tend to believe scientific explanations which sound good or please them rather than those which are accurate and correct. This is the basis of the great global warming hoax. Fool the dummies…

On Twitter, Peden said he was a “climate ‘denier’”:

Yes, I’m a climate “denier”. I’m also an atmospheric physicist, and member of both the national physics and math honor societies and MENSA.

Peden described increasing CO2 Levels as responsible for greening of the planet and called CO2 is “good stuff”:

Increasing CO2 levels have led to… you guessed it… increased greening of the planet. CO2 is good stuff, and certainly not a “pollutant”.

“CO2 is a useful trace gas in the atmosphere, and the planet would actually benefit by having more, not less of it, because it is not a driver for Global Warming and would enrich our vegetation, yielding better crops to feed the expanding population,” Peden claimed in an editorial posted on his website. [2]

“If we’re right, then nature will take its course as it always has, and normal life will go on by adapting to climate change, rather than freaking out over a pending climate catastrophe.” [2]

Posting on Facebook, Peden made reference to “The next civil war” and that he was just waiting of a “call to arms” by President Trump:

Peden has tweeted in support of fracking:

How stupid are the anti-fracking Liberals?

A well that has been prepared for fracking is environmentally much safer than a well with a simple open borehole. The portion that passes through the water table is double encased in both steel and concrete, the open borehole is not.

Peden went to Twitter to voice his views on illegal immigration:

Methinks children of illegal aliens should not have automatic citizenship just because their criminal parents chose to ignore our laws.

Peden made several tweets directed to Donald Trump suggesting “Don’t give in to the Great Global Warming Hoax”:

@realDonaldTrump Don’t give in to the Great Global Warming Hoax. We’re SUPPOSED to be warming during interglacial periods between ice ages.

@realDonaldTrump I’m a MENSA atmospheric physicist and sense you are a high IQ type who will be able to see through the Global Warming Hoax.

On Twitter, Peden claimed Liberalism was a “mental illness”:

Liberalism is a mental illness that appears to primarily affect those of below average intelligence, with a few exceptions.

Copenhagen produced no deal, no economy-wrecking cure for the nonexistent Man-made Global Warming. Are we finally coming to our senses?

Peden appears to have written a short introduction to his editorial that was shared on a variety of climate change denial websites including ICECAP in the summer of 2008: [10]

“As a dissenting physicist, I simply can no longer buy the notion that CO2 produces any significant warming of the atmosphere at any rate.  I’ve studied the atomic absorption physics to death, from John Nicol’s extensive development to the much longer winded dissertation by Gerlich & Tscheuschner and everything in between, it simply doesn’t add up.  Even if every single IR photon absorbed by a CO2 molecule were magically transformed into purely thermal translational modes , the pitifully small quantity of CO2 in the atmosphere doesn’t add up to much additional heat.  And if the aforementioned magical 100% transformation from radiation into “heat” were true, then all arguments concerning re-emission ( source of all the wonderful “greenhouse effect” cartoons with their arrows flying in all directions ) are out the window.

“More and more, I am becoming convinced that atmospheric heating is primarily by thermal conduction from the surface, whose temperature is determined primarily by solar absorption.  I get a lot of email from laymen seeking simple answers.  My simple reply goes like this:

“With a parting comment:  If we were to have 96 continuous hours without sunlight, temperatures would likely be below freezing over all the world’s land masses.  The warmest place you could find would be to take a swim in the nearest ocean.  There is no physical process in the atmosphere which ‘traps’ heat.  The so-called ‘greenhouse effect’ is a myth.”

Jim Peden, listed as a retired atmospheric physicist, was signatory to an open letter to United Nations Secretary General Ban Ki-Moon calling for the UN to “lead the UN into abandoning the CO2-based theory of global warming and nullifying its former recommendations.” [13]

“The assertion that the recent rapid rise of CO2 is unique and dangerous is both deceptive and irrelevant because CO2 does not drive the world’s climate,” the letter claimed, adding “ there is clearly no evidence for the CO2-based theory of global warming. Indeed, there is only evidence against it.” [13]

The letter was signed by many notable climate change deniers, including but not limited to: [13]

Peden critiqued RealClimate.org, describing it as a “staged and contracted production, which wasn’t created by ‘scientists,’ it was actually created by Environmental Media Services, a company which specializes in spreading environmental junk science on behalf of numerous clients who stand to financially benefit from scare tactics through environmental fear mongering.” [3]

Peden’s primary contribution to the skeptical science community is his lengthy editorial titled “The Great Global Warming Hoax.” After local newspapers were reticent to publish the attack on man-made global warming arguments, he decided to publish it himself on his Middlebury Community Network—a site he personally maintains.

During the article which attempts to “teach” a layman the basic science that disproves climate change, Peden also repeatedly attacks Al Gore for a supposed lack of credentials in the field.

Peden’s views can be summarized as follows:

1. C02 does not contribute to global warming, and we would benefit from having more of it in the atmosphere.
2. We didn’t cause global warming and we can’t stop it.
3. Solar activity and ocean currents are the main drivers of climate change.
4. The IPCC is corrupt.
5. Listing polar bears as an endangered species was part of a political agenda.

Those who sign the declaration must agree that “human-caused climate change is not a global crisis” and recommend that “That all taxes, regulations, and other interventions intended to reduce emissions of CO2 be abandoned forthwith.” [5]

Peden reproduces the Manhattan Declaration in the appendix of his editorial report on Middlebury Networks. [1]

According to a search of Google Scholar, Peden has published no articles in peer-reviewed journals relating to climate science.  Peden’s personal blog, Opinions On Various Stuff, was last updated in 2014. [7]