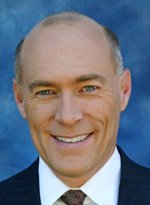 James Spann is a television meteorologist based in Birmingham, Alabama. He is currently the chief meteorologist for ABC 33/40. [2]

Earlly in his career, spann studied electrical engineering at UA while paying for his tuition while working in radio. He worked for a variety of radio stations as a news anchor and weatherman such as WSFA/Channel 12 in Montgomery, Channel 13/WAPI in Birmingham, KDFW/Channel 4 in Dallas, and WBRC/Channel is in Birmingham. He earned his certificate in broadcast meteorology from Mississippi State University through distance learning. In 1996 Spann joined ABC 33/40 in Birmingham where he has worked for more than 22 years. [11]

Spann was also the chairman of the Christian radio station Reality Radio, which once operated on Birmingham FM as WRRS–FM “Reality 101” and later became the parent organization for AllWorship.com.

James Spann was featured on Glenn Beck, where he declared:

“Earth’s climate has changed since the day God put it here. We have had these cyclical changes, and I believe that most of this is purely natural.” [3]

“I do not know of a single TV meteorologist who buys into the man-made global warming hype. I know there must be a few out there, but I can’t find them.”

“The climate of this planet has been changing since God put the planet here. It will always change, and the warming in the last 10 years is not much difference than the warming we saw in the 1930s and other decades. And, lets not forget we are at the end of the ice age in which ice covered most of North America and Northern Europe.” [4]

Spann was a signatory to the Cornwall Alliance for the Stewardship of Creation’s “An Evangelical Declaration on Global Warming.” He is listed among “scientists and medical doctors” signatories. [5]

Those who sign the declaration must agree with this statement: “We deny that carbon dioxide—essential to all plant growth—is a pollutant. Reducing greenhouse gases cannot achieve significant reductions in future global temperatures, and the costs of the policies would far exceed the benefits.”

Cullen had written that “If a meteorologist can’t speak to the fundamental science of climate change, then maybe the AMS shouldn’t give them a Seal of Approval.”

Responding to Cullen, Spann said “I know dozens and dozens of broadcast meteorologists all over the country… . I do not know of a single TV meteorologist who buys into the man-made global warming hype” (.doc). [7]

His blog post was picked up and spread by The Drudge Report, and further promoted by Marc Morano at the U.S. Senate Committee on Environment & Public Works. [8]

According to a search of Google Scholar, James Spann has not published any articles in peer reviewed journals.