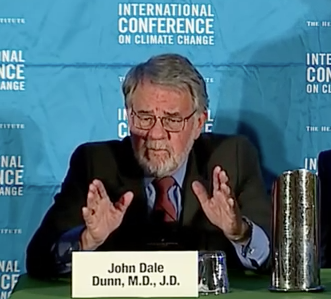 John Dale Dunn is a practicing physician and has worked as a civilian emergency medicine faculty physician at Carl R. Darnall Army Medical Center in Fort Hood Texas since 2003.

John Dale Dunn is also a policy advisor for the Heartland Institute and the American Council on Science and Health (ACSH).

“I assert that warm is good for human health and that global warming, even the most extreme estimates, will not create heat illness or death increases and certainly no changes that are more important than the basic public health measures of vector control, water, nutrition, sewage and water quality, and housing quality.” [2]

“The internal documents obtained under FOIA revealed the EPA and enviros were looking for a hook and decided the hook they were looking for was the health of children […] Why not? Nothing better to get politicians moving than marching and chanting women in matching t-shirts on a tear, worried about and advocating for their babies.” [7]

In January 2018, more than 200 scientists endorsed an open letter calling on the American Museum of Natural History (AMNH) to remove climate change denier Rebekah Mercer from its board and to “end ties to anti-science propagandists and funders of climate science misinformation.” The New York Times reported that those among the AMNH letter calling for Mercer to step down were Michael E. Mann, director of the Earth System Science Center at Pennsylvania State University, and Katharine Hayhoe, director of the Climate Science Center at Texas Tech University. [23]

Dunn was among a group of climate change deniers who responded with their own open letter, calling for the AMNH “not to cave in to this pressure.” The letter was signed by numerous individuals with ties to groups funded by the Mercer Family Foundation such as Will Happer of the CO2 CoalitionRichard Lindzen, a fellow at the Cato InstituteCraig Idso, the chairman of the Center for the Study of Carbon Dioxide and Global Change. There are a number of signatories affiliated with the Heartland Institute, which has received over $5.78 million from the Mercer Family Foundation since 2008. [24]

Dunn was a speaker at the Heartland Institute’s “America First Energy Conference” at the Marriott Hotel in Houston, Texas.  Dunn spoke on Panel 4B: “Energy, Climate, and Human Health.” His presentation was titled “Noble Lies”: [16]

The event description read as follows: [13]

“What scientific and economic evidence is there that the plan is putting the nation on the right path for economic growth, environmental protection, or both?” [13]

In a fundraising letter obtained by DeSmog, Fred Palmer had promoted the event as having the goal to “review the scientific and economic evidence that exposes the fraud inherent in the Obama-era regulation regime” while discussing “the overwhelming benefits of fossil fuels to us all.” [14]

As reported at the Houston Chronicle, speakers notably included two Trump Administration officials: Richard W. Westerdale II of the State Department and Vincent DeVito of the Department of Interior. David Bernhardt, deputy secretary of the Interior Department, was also formerly listed as a Heartland conference speaker, but apparently withdrew. [17]

The Climate Investigations Center put up a parody of the America First Energy conference website, complete with profiles on the individual speakers and highlighting their corporate funding and ties to groups such as the Cooler Heads Coalition (CHC). [19]

Dunn was a panelist at the Heartland Institute’s 12th International Conference on Climate Change (ICCC12), appearing on Panel 4A) “Human Health Effects.” [12]

John Dale Dunn was a signatory of a petition (PDF) organized by Richard Lindzen of the Cato Institute urging President Donald Trump to pull the United States out of the United Nations international convention on climate change (UNFCCC). [10]

“In just a few weeks, more than 300 eminent scientists and other qualified individuals from around the world have signed the petition below,” Lindzen wrote in the letter. [10]

Dunn was a speaker at the Heartland Institute’s Ninth International Conference on Climate Change (ICCC9) in Las Vegas, Nevada. [6]

He spoke on Panel 11: “Climate Change, Human Health, and Adaption” with Craig Loehle. Video is available below.

Following the panel, Dunn took part with a Q&A also featuring Craig Loehle and Myron Ebell. Note that the Heartland Institute has since switched the Q&A video to “private” and it is no longer viewable on YouTube.

John Dale Dunn disputes the relevance of a study that showed significant health benefits to banning smoking in a local restauraunt. Dunn argues that the study had a conflict of interest, and counters with a paper published by the National Bureau of Economic Research and the Rand Corporation. [8]

According to Sourcewatch, the National Bureau of Economic Research has been called non-partisian, “but failed to identify a penny of the $10 million it receives in conservative philanthropic underwriting.” [9]

Dunn was a speaker at the Heartland Institute‘s Seventh International Conference on Climate Change (ICCC7). [26]

His speech, titled “Does Global Warming Harm Human Health?” can be viewed below.

Dunn was a speaker for the Second International Conference on Climate Change (ICCC2), hosted by the Heartland Institute. His presentation, titled “Human Health Effects of Warming and Cooling” can be viewed below. [4]

Dunn was a speaker at the Heartland Institute‘s First International Conference on Climate Change (ICCC1) in New York.

His speech, titled “Climate Change and Human Health” can be viewed below.  [2]

According to a search of Google Scholar, Dunn has published a number of papers in medical journals.

He does not appear to have published any papers related to climate, or climate change and human health.