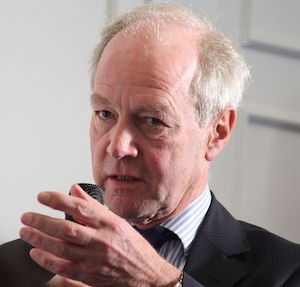 Lord Peter Lilley is a former British Conservative Party MP and until April 2020, sat on the Board of Trustees of the UK climate science denying thinktank the Global Warming Policy Foundation (GWPF). He represented the Hitchin and Harpenden constituency from 1997 to 2017, previously holding the seat for St Albans from 1983. [1], [2], [35]

Lilley has a record of consistently voting against policy measures to tackle climate change, including in 2008 when he was one of only five MPs to vote against the UK’s Climate Change Act. [3], [4]

According to parliamentary records, between 2006 and 2014 Lilley was a Non-Executive Director and Vice Chairman of Tethys Petroleum, a Cayman Islands-based oil and gas company with drilling operations in Kazakhstan, Tajikistan and Uzbekistan. In 2012, he earned £47,000 from the role and received share options worth at least $400,000, according to an article in the Guardian. [35], [7], [8], [9]

A DeSmog investigation revealed in 2012 that Lilley was being paid $300 an hour to advise an Indian company building a coal-fired power station. [10]

In 2018, Lilley was revealed as one of a five-member “expert committee” set up in October 2017 by International Trade Secretary Liam Fox days before a crunch EU summit over a Brexit deal. A Department for International Trade spokesperson said the committee existed to advise officials on “matters related to trade and investment.” [34]

During a debate in the House of Commons, Lilly declared: [11]

“The Government and the alarmists have to concoct a lot of feedbacks that so far have not manifested themselves to predict that in future we will see far higher rises in temperature from a given increase in CO2 than we have in the past. I am neither a denier of the science nor an alarmist. I am a lukewarmist, if one likes […] I am a global lukewarmist, and I take seriously[…]”

Lilley continued, contending there is no scientific consensus on climate change “at the alarmist end of the spectrum”: [11]

“A lot of fairy stories are attached to and latched on to a genuine scientific concern. The first fairy tale, which the Government foster, is the idea that there is total consensus in science at the alarmist end of the spectrum. […] The simple fact is that the science is not resolved. A lot of serious scientists think that although there is a measure of impact—I agree with that—the alarmist views are not upheld by the science. A majority may well disagree with the scientists to whom I have referred.”

In a debate in the House of Lords on a proposed “net zero emissions” target for the UK, Lilley said: [31]

“My Lords, I draw your attention to my interest as a trustee of the Global Warming Policy Foundation. The Government have embarked on a policy that will result in one of the most expensive programmes since the introduction of the welfare state, without first carrying out a cost-benefit analysis. Is that not extraordinary given that when the previous target was raised from 60% to 80%, in the Government’s estimates the cost more than doubled? Going from 80% to 100% will certainly more than double it again.

“The Chancellor believes that it will cost a trillion pounds, which could otherwise be spent on welfare programmes, health and education; the UN climate committee believes it will cost at least twice what the Treasury estimates; and the New Zealand Government have estimated that it will cost five times as much relative to their economy, as has been suggested. Given ​that, is it not irrational to enter this, as any, policy programme without first estimating the costs and calculating the benefits? Why are we doing it?” [31]

“The tendency of those committed to the theory of catastrophic man-made global warming to unquestioningly adopt the assumptions, at every stage, that maximize the expectation of calamity should alert us that groupthink is driving the movement.”

Lilley appeared on RT to discuss the so-called “ClimateGate” affair, where he declared: [13]

“I feel certain from reading a lot of the emails and the documents that they were adjusting the data, manipulating the data, concealing the doubts they had internally and continuing to express certainty externally. There’s even example of the computer codes that they’ve adjusted to cut off the evidence of the recent period of global cooling. For the last decade, the world hasn’t heated up as their theories suggest it should have done. Indeed, it has cooled slightly.

[…] And likewise they’ve altered the data in the past, or they’ve selected data from the past which has wiped out the evidence of the so-called medieval warming period when the world was probably warmer than it is now, because after all if it was warmer then without us all burning lots of hydrocarbons, it’s suggests that the hydrocarbons aren’t the only things that cause the temperature and the climate to change.”

“I personally—I’m a physicist by training, long ago—accept that doubling the amount of carbon dioxide in the atmosphere will produce a modest warming in the climate, but nothing like the alarmist fears which these scientists have been trying to generate or that lie behind the Copenhagen conference.”

Speaking about the Stern Report in a Commons debate, Lilley said: [14]

“My overall position on global warming is that, as a physicist — I studied physics at Cambridge — I am not one of those who deny that carbon dioxide emissions heat the planet. They do have that effect, although there is less certainty about how much the complex feedback effects that climate models seek to replicate may amplify the comparatively modest effect of increasing CO2 and other greenhouse gas emissions. Nonetheless, in my view it is wise to take measures to prevent and to adapt to global warming, and it is sensible to try to assess the costs and benefits of action and inaction to ensure that we adopt the most cost-effective approach.”

“The simple fact is that, since the beginning of this century, the average global temperature has flatlined; indeed, over the past 18 months it has fallen back, and according to the satellite measurements of temperature, it is now basically back at the level it was in 1979, when such measurements started to be taken.”

“I hope that we will listen to those scientists, many of whom are in Government employ, who have warned against alarmist views, and that we will take a more consensual view of the basic minimum science that is agreed and open that up to debate and discussion, without trying to silence those who disagree by calling them “deniers” and equating them with holocaust deniers. As I said, I am not a denier-I am a lukewarmer-but even those who deny the existence of anthropological global warning deserve to be heard, just as the alarmists do, and it is sad that we have heard only one or two such views expressed in the House today,” Lilley declared in a Commons debate. [15]

Lilley was one of 13 members appointed to the House of Lords’ Environment and Climate Change Committee, a panel examining the environmental impacts of government policy, The Independent reported. Referring to environmentalists who had criticised his appointment as “alarmists,” Lilley told The Independent that he “may ask inconvenient questions about what scientific evidence there is for alarmist claims.” [38]

According to Companies House, Lilley’s role as a trustee and director of the Global Warming Policy Foundation (GWPF) was terminated. He did not respond to a request for comment from DeSmog. [37]

Lilley took part in a House of Lords debate on the teaching of climate science, in which he said: [32]

“…let children know that the impact of CO2 is well established by observations and can be measured, and that the direct effect of doubling the amount of CO2 in the atmosphere will be a one degree centigrade increase in the average temperature of the globe.” [32]

Lilley attended an event organised by the Global Warming Policy Foundation (GWPF) in the House of Commons to mark the 10 year anniversary of the UK‘s Climate Change Act. Both the GWPF and Lilley have repeatedly opposed the Act, claiming it “burdened consumers with extraordinary costs.” [16]

For the occasion, the GWPF launched a report which blames the Climate Change Act “and other anti-fossil-fuel policies” for “worsening” fuel poverty in the UK. [17]

It claims that “rather than solving climate change, the only detectable effect of the Climate Change Act has been to sustain levels of energy poverty that politicians from all parties had promised to abolish.” The report was written by climate science denier Rupert Darwall. [17]

Speaking at the event, Lilley said: “I decided to vote against the Climate Change Act when I read the impact assessment which showed that the potential cost was twice the prospective benefit. Ten years later the costs are coming home to roost and the benefits remain illusory.” [16]

A DeSmog investigation revealed that Lilley was one of a five-member “expert committee” closely advising then International Trade Secretary Liam Fox on “matters related to trade and investment”. Other members included Ruth Lea, a trustee of the Global Warming Policy Foundation, and Shanker Singham, Fellow of International Trade and Competition at the Institute of Economic Affairs. [34]

Lilley was involved in a Channel 4 sting over politicians being offered cash to advise on Brexit. Lilley denied the allegations and reported Channel 4 to Ofcom over the programme. [18], [19]

Ahead of the UK 2017 General Election Lilley stepped down as an MP for Hitchin and Harpenden after 34 years with the Conservative Party. [20]

Lilley wrote a report entitled “The Cost of the Climate Change Act” for the GWPF. In it he claims that climate policy will cost the nation £319 billion. [21]

Lilley joined the GWPF along with Labour MP Graham Stringer as members of the Board of Trustees. [4], [2]

Lilley was one of two MPs to vote against the Energy and Climate Change Committee’s acceptance of the UN Intergovernmental Panel on Climate Change’s (IPCC) conclusion that humans are the dominant cause of global warming. [22]

During this same month, Lilley attended a meeting in the House of Commons organised by climate science denier and Northern Ireland politician Sammy Wilson. The meeting was organised on behalf of “Repeal the Act,” a group that argues the “climate is always changing” and seeks to repeal the UK’s Climate Change Act. [23]

Lilley wrote a letter to the BBC’s director of editorial policy and standards complaining about the broadcaster’s “systemic bias” in its climate change reporting. [24]

Peter Lilley wrote a report for the GWPF entitled “What is Wrong with Stern: The Failings of the Stern Review of the Economics of Climate Change.” Bob Ward, policy and communications director at the Grantham Research Institute on Climate Change and the Environment at London School of Economics and Political Science, described Lilley’s GWPF report as being based on “misrepresentations and bad economics.” [25], [26]

Lilley was one of only three MPs who voted against the Climate Change Act. He claimed one reason for doing so was because it was snowing in October which he argued showed winters weren’t warming. [27], [28]

According to his bio, Lilley is the author of several publications including: [1]