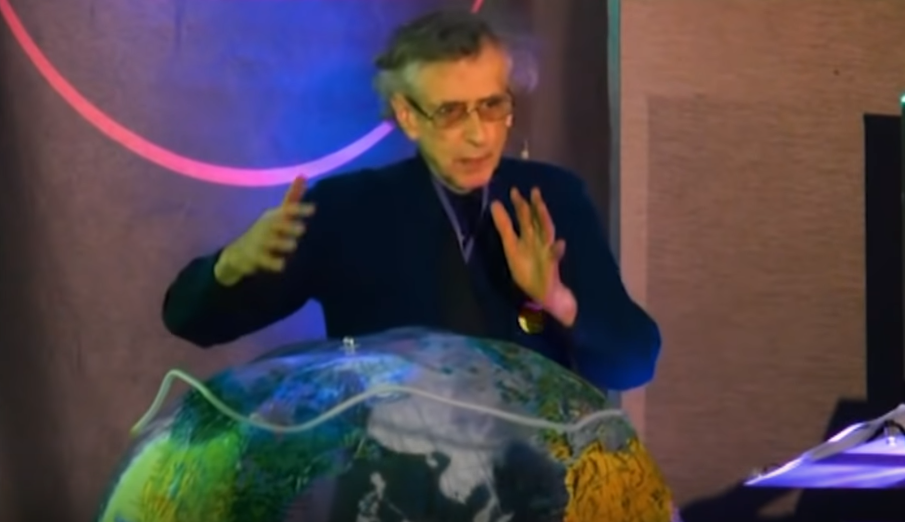 Piers Corbyn is an astrophysicist who regularly speaks at climate science denial events. He is founder and director of the weather forecasting company WeatherAction. [3], [4], [5]

Corbyn bases his forecasts on activity happening on the surface of the sun. He claims the sun is the main driver behind changes in global temperature, rather than human activities and the burning of fossil fuels. [6]

Since the beginning of the coronavirus pandemic, Corbyn has been at the forefront of promoting misinformation and conspiracy theories about Covid-19, and has led and attended a number of anti-lockdown protests. [29], [30]

During a discussion on LBC radio, Corbyn rejected the findings of a recent UN report from the Intergovernmental Panel on Climate Change: [10]

“This report is a pack of lies, it is anti-scientific nonsense based on fraud which is intended to regiment people into paying more in carbon taxes and help the oil companies increase profits by increasing prices.” [10]

Corbyn told the Guardian: “I was thinking of using the weather to discover what the sun had been doing in the past… But then I thought, that’s just stupid: why not use the sun to predict what the weather will do in the future?” [6]

In an interview with fringe YouTube channel Windows On The World, Corbyn said:

“It’s a massive ideological tool by the globalists who are under massive pressure right now to justify the de-industrialisation agenda making super profits for the biggest corporations and more and more money for the super rich.” [11]

In one of his regular interviews with YouTube channel Windows on the World, Corbyn said that President Barack Obama’s climate change action plan was “part of a globalisation agenda to export jobs from the west and generally lower living standards worldwide to the benefit of this super elite.” [12]

Speaking to The Guardian, Corbyn said:

“For one thing science doesn’t do settled opinions. And for another they are all wrong.” [6]

He also told The Guardian that former prime minister Margaret Thatcher plotted to popularise and endorse the science of man-made climate change, as a way of converting Britain from coal to nuclear power, to defeat striking miners. [6]

Indicating there is a network of climate science denying politicians who turn to him for advice, he told The Guardian:

“Graham Stringer, of Labour, is sympathetic.” He continued, “Sammy Wilson DUP, a number of Tories, Boris is very sympathetic [Johnson has often used Corbyn, in an unlikely alliance, as his climate guru]. Now I think we have George Galloway which is significant, because he can be very persuasive…” [6], [13]

Corbyn was arrested following the distribution of leaflets comparing COVID-19 vaccination efforts to the Holocaust, The Guardian reported. [33]

Corbyn spoke at a mass gathering in Trafalgar Square protesting against the Government’s coronavirus restrictions and mass vaccination. Speaking to a Guardian journalist before the event, Corbyn said:

“In terms of whether you believe the virus is a hoax or not, whatever is happening now is less than or equal to a normal flu, so the lockdowns and all that goes with them is unjustifiable in any terms.

“We are calling for MPs to refuse renewal of the Covid Act [Coronavirus Act], and if they do not, we will campaign to have them removed from office.”

Corbyn was arrested while on stage at the event and later issued with a £10,000 fine for his role in organising the protest in breach of coronavirus laws restricting public gatherings. [31], [32]

Corbyn tweeted that the coronavirus pandemic was “simulated” in October 2019 by “mega-rich control freaks” like Bill Gates and George Soros. He went on to write that the aim of the virus was to deal with the “CO2 problem” through a “world population cull” in a “mass vaccination plan containing poison”. Corbyn also called on his followers “#RefuseTheVaccine”. [28]

Corbyn appeared on a talkRADIO show in which he responded to news that the ten hottest years in the UK had occurred since 2002 by saying: [26]

“Their observation of this extra number of warm years since 2002 is that they’ve had an extra amount of climate fraud since 2002.”

He went on to say:

Corbyn was an invited speaker to the “New Dawn of Truth” conference organised by the climate science denying Independent Committee on Geoethics (ICG). The ICG initially advertised the conference as being associated with the University of London. The university was quick to remove its support once it became aware of the group’s climate science denial. [14], [15]

At the conference, Corbyn declared his support for Clexit – a climate change denial campaign group formed shortly after the UK’s decision to leave the EU. According to Clexit’s founding statement (PDF), “The world must abandon this suicidal Global Warming crusade. Man does not and cannot control the climate.” [16]

Corbyn appeared on BBC 1 programme The Big Picture, discussing whether it was “time to take climate change seriously?” His appearance was criticised for being misleading by many mainstream scientists, including the Met Office’s Michael Fish. [17]

Corbyn Attended a meeting of climate science deniers in advance of the international climate change talks in Paris, in which the group agreed “the key messages they want to get across to the press,” Open Democracy reported. [18], [19]

Corbyn spoke at an event in the Houses of Parliament organised by DUP MP Sammy Wilson on behalf of “Repeal the Act” a group that argues the “climate is always changing.” [21], [22]

At the event, Corbyn claimed the jet stream is to blame for all bad weather (without mentioning the melting Arctic), declared war on termites, and sent a hearty congratulatory message to the Heartland Institute’s annual climate denial conference in Las Vegas. [21]

Corbyn attended a meeting to celebrate “Climate Fools Day” – the anniversary of the day MPs passed the UK’s 2008 Climate Change Act. Corbyn is listed on the invite as an expert at “successfully predicting extreme weather events.” [24]

The meeting was organised by DUP MP and environment minister at the time, Sammy Wilson, and was held in the Houses of Parliament. The event was supported by Labour MP and now Global Warming Policy Foundation member Graham Stringer. One of the event invites read: “The danger is not Climate Change but Climate Change Policy – for which there is no evidence in justification.” [24]

Piers Corbyn was signatory to an open letter to United Nations Secretary General Ban Ki-Moon calling for the UN to “lead the UN into abandoning the CO2-based theory of global warming and nullifying its former recommendations.” [27]

“The assertion that the recent rapid rise of CO2 is unique and dangerous is both deceptive and irrelevant because CO2 does not drive the world’s climate,” the letter claimed, adding “ there is clearly no evidence for the CO2-based theory of global warming. Indeed, there is only evidence against it.” [27]

The letter was signed by many notable climate change deniers, including but not limited to: [27]

Corbyn was present at what DeSmog has described as the UK’s “first major climate denial conference.” The conference was organised by the Institute of Economic Affairs (IEA), and listed speakers including Fred Smith, the founder of the Koch-funded Competitive Enterprise Institute (CEI), who had flown over from the United States along with the coal-funded sceptic scientist Dr Patrick Michaels. [25]