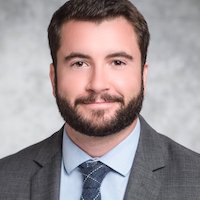 Travis Fisher is an economist and former adviser to Federal Energy Regulatory Commission Chairman Kevin McIntyre. He was formerly an employee of the pro-fossil-fuel Institute for Energy Research (IER). Before working at IER, Fisher was an economist for the Federal Energy Regulatory Commission (FERC). Fisher joined the Electricity Consumers Resource Council (ELCON) as President and CEO in April 2020. ELCON describes itself as “ the national association representing large industrial users of electricity” created to “advocate policy more effectively by forming a united front.”[1], [2], [25], [26]

Fisher has said he became a fiscal conservative after reading the works of Frederic Bastiat and taking a free market economics course through North Carolina State University. He interned at the conservative John Locke Foundation before joining the Federal Energy Regulatory Commission as an economist. Following his work for the government, Fisher moved on to work for the Institute for Energy Research (IER) as a policy associate. [3]

After working for the pro-fossil-fuel Institute for Energy Research (IER), Travis Fisher joined President Trump’s transition team at the Department of Energy. E&E News reported that Fisher’s move was facilitated by IER‘s President Tom Pyle, who led the DOE transition. [4]

Fisher oversaw a DOE staff report requested by Rick Perry that found natural gas was the largest factor driving the closure of coal plants this decade. Following that report, Perry sent a request to the FERC to boost fossil fuel and nuclear plants, and his request was unanimously rejected. [4]

“The single greatest emerging threat to reliable electricity in the U.S. does not come from natural disturbances or from human attacks. Rather, the host of bad policies now coming from the federal government—and, unfortunately, from many state governments —is creating far greater and more predictable problems with grid reliability.”

Travis Fisher said that his thinking has been influenced by fossil fuel proponent Alex Epstein. Fisher’s testimonial appears on the Center for Industrial Progress’s website: [6]

“Alex Epstein has helped me re-frame my thinking, as Julian Simon set out to do, to take into account all facets of the human environment when dealing with environmental issues. He illustrates very effectively that the ‘natural’ environment is not conducive to human progress, and thus we must set out to improve it if we wish to improve ourselves.”

Fisher was quoted by The Heartland Institute, discussing his recent study at IER claiming that wind power was four times as expensive as coal: [7]

“The notion that wind and solar power are becoming cheaper than sources like coal and nuclear is patently false,” Fisher claimed.

“This narrative tends to compare only brand-new power plants—highly subsidized wind and solar installments—to coal plants paralyzed by costly and unprecedented regulations,” said Fisher. “The implication is there is no longer a cost premium in replacing the output of today’s existing coal plants with power from wind and solar facilities, never mind the obvious reliability problems in attempting to do that.”

“Going 100 percent renewable is an outrageously expensive and impractical thing to do—it’s irresponsible to make it sound easy or even desirable,” Fisher wrote in an “analysis” piece for the Institute for Energy Research. [8]

“AWEA fails to address environmental impacts other than air pollution, which include bird and bat deaths, increased land use, and problems associated with the rare earths used in wind turbines,” Fisher claimed.

“These are real environmental concerns that AWEA routinely leaves out of the discussion. Consequently, policymakers should not rely strictly on AWEA’s statements if they want to make informed policy decisions.”

[…] “AWEA is hopelessly divorced from reality when it pretends that wind power replaces natural gas and coal rather than nuclear power.”

“Despite years of subsidies for wind, solar, and other renewables, these technologies are still not competitive with coal, natural gas, and other affordable, reliable sources of electricity generation,” Fisher said in his testimony before the Ohio Senate Public Utilities Committee. [10]

ELCON promotes itself as “ the only national association representing industrial electricity users interacting with the Federal Energy Regulatory Commission (FERC) on a regular basis.” [26]

According to its website, ELCON “is also active in the legislative process, working with Members of Congress and their staffs promoting policies consistent with its objectives.” [26]

Axios reported Travis Fisher was leaving the DOE, according to an administration official. Fisher had overseen a study that found that the market for cheap natural gas and renewable energy were the reason some nuclear and coal plants were struggling. The study contrasted with the rule issued by Perry pushing to boost coal and nuclear plants. According to one source, Fisher’s departure from the DOE was influenced at least in part due to his difference in policy positions from Perry. [11]

As of March, E&E News reported that Fisher had left his post at the DOE. He is expected to move to a position at the FERC to work as an adviser for Kevin McIntyre’s office, although his role could change. He would report to Chief of Staff Anthony Pugliese, who was appointed the prior summer. [4]

E&E News reported that, according to his former colleagues, Fisher’s move was partly the result of the agency’s request to financially support struggling coal and nuclear plants. Fisher had led the study, tasked by DOE Energy Secretary Rick Perry, to write the staff report that found natural gas to be the leading driver of coal plant closure this decade. [4]

In an April 16, 2017 email, Fisher asked for “help” on the issue of “wholesale electricity market reform.”

Tom Stacey has ties to a range of anti-wind groups, telling MasterResource he was involved with NRECA (National Rural Electric Cooperatives Association), ACRE (Action Committee for Rural Electrification, The Buckeye (Policy) Institute, the Institute for Energy Research, and with IICCUSA.org (Interstate Informed Citizens Coalition), among others. [13]

Fisher’s email came two days after Secretary of Energy Rick Perry ordered a controversial grid study. Fisher’s appointment to lead the study was initially criticized, after it came out that Fisher had authored a 2015 IER report that described clean energy policies as “the single greatest emerging threat” to the power grid. [12]

Fisher organized a staff report on electricity markets and reliability, at the request of U.S. Secretary of Energy Rick Perry. Perry had ordered a grid review in April, launching with a memo that claimed the electrical supply was being undermined by “market-distorting effects of federal subsidies that boost one form of energy at the expense of others” including environmental regulations. [14]

The American Wind Energy Association and the Advanced Energy Economy, which represents a range of corporations, released their own report countering Perry’s concerns. [15]

“The recommendations ignore renewable energy’s contributions to a reliable electricity system,” he said. “They also include misguided proposals to gut environmental rules for coal and nuclear plants, and to pay fossil resources for reliability services that DOE hasn’t demonstrated are necessary. DOE and Secretary Perry should be focusing instead on accelerating the growth of clean energy rather than creating barriers.” [16]

The DOE Staff Report itself concluded contrary to Perry’s concerns, finding that the largest reason for coal plant closurs has “been the advantaged economics of natural gas-fired generation” due to cheap gas from fracking,  and that the grid was operating reliably. [16]

Fisher later spoke about his involvement in the report on The Interchange: [17]

Fisher joins the DOE as a Special Advisor, a hire that was facilitated by IER President Tom Pyle. [4]

Fisher contributed to an IER report criticizing rooftop solar power by listing a range of “myths” about residential solar generation. The report was republished at the Heartland Institute. [18], [19]

Fisher appeared on an episode of the Center for Industrial Progress‘s “Power Hour,” hosted by fossil fuel proponent Alex Epstein, to discuss “the 100% Renewable Scam.” [20]

Epstein introduced Fisher as a “Friend of Energy.” Fisher had written an article, “Busting the ‘100 Percent Renewable’ Myth” at the Institute for Energy Research. [8]

Fisher wrote an IER report that described state and federal clean energy policies as “the single greatest emerging threat” to the power grid. Fisher wrote in the report: [5]

“The single greatest threat to reliable electricity in the U.S. does not come from natural disturbances or human attacks. Rather, the host of bad policies now coming from the federal government –  and unfortunately from many state governments – is creating far greater and more predictable problems with grid reliability.” [5]

Several years after Fisher’s study, the Energy and Policy Institute reported that Fisher’s 2015 report was “strikingly similar” to a memo from Secretary Rick Perry, who ordered a DOE study on grid reliability. “Perry’s memorandum included a specific order to examine, ‘The extent to which continued regulatory burdens, as well as mandates and tax and subsidy policies, are responsible for forcing the premature retirement of baseload power plants’” the Energy and Policy Institute reported. [21]

Fisher list listed as author on an IER comment on the EPA‘s proposed power plant rule to limit emissions from existing powerplant. According to the IER summary, the “EPA’s proposed rule is a threat to the power grid, raises the cost of energy, and offers no tangible benefits in terms of global temperatures.” [22]

Fisher testified before the Ohio Senate Public Utilities Committee. According to IER, his testimony focused on “ the misperceptions of the Renewable Portfolio Standards (RPSs) as they relate to the state of Ohio.” [10]

In his testimony, Fisher listed the following as “misconceptions” regarding RPSs: [10]

“None of these are true, but what is true is that RPSs raise the cost of electricity, and the states that have RPSs tend to have the most expensive electricity,” Fisher claimed. [10]

Robert L. Bradley Jr. reported that Travis Fisher was a panelist at a “Wind Policy Luncheon” co-hosted by the Institute for Energy Research and the American Energy Alliance (AEA). [23], [24]

“In a study to be released next week by the Institute for Energy Research, the parent organization of the American Energy Alliance, Big Wind’s dirty little secrets are laid bare,” the event description read. “The wind production tax credit is one of the largest transfers of wealth in the energy sector, sucking billions of dollars from states that derive no benefit from wind energy to underwrite the mandates in other states.”  [24]

Below are some of Fisher’s posts and reports at the Institute for Energy Research: