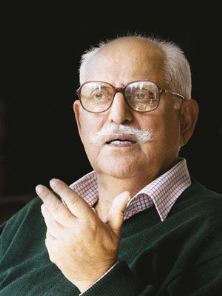 Vijay Kumar Raina is a geologist/glaciologist.

Vijay Kumar Raina is the ex. Deputy Director General of the Geological Survey of India where his research covered geology and the glaciers of the Himalayas, Andaman Islands and volcanoes in the Bay of Bengal. He retired in 1991 after over 35 years of studying glaciers.

Raina is known for publishing a controversial study, a discussion paper titled “Himalayan Glaciers – State-of-Art Review of Glacial Studies, Glacial Retreat and Climate Change,” that suggests climate change may not be causing glaciers to retreat in the Himalayas.

He is a recipient of the National Mineral Award and the Antarctica Award for two Indian scientific expeditions to the Antarctic.

Vijay Kumar Raina is a signatory to a letter that states the following: “Climate changes naturally all the time, sometimes dramatically. The hypothesis that our emissions of CO2 have caused, or will cause, dangerous warming is not supported by the evidence.” [1]

“It is premature to make a statement that glaciers in the Himalayas are retreating abnormally because of the global warming. A glacier is affected by a range of physical features and a complex interplay of climatic factors. It is therefore unlikely that the snout movement of any glacier can be claimed to be a result of periodic climate variation until many centuries of observations become available. While glacier movements are primarily due to climate and snowfall, snout movements appear to be peculiar to each particular glacier.”

“While one may not doubt the fact that the climate, by and large, does appear to be getting warmer; what, however, does tax the mind is the attempted linkage of the glacier retreat in the Himalayas to the global warming.” [2]

“Nothing abnormal is happening to Indian glaciers. They’re retreating because of negative mass balance. There’s no evidence of climate change.” [3]

VJ Raina was a signatory to an open letter to UN Secretary-General Ban Ki-Moon published in the National Post that suggests adapting to climate change rather than enacting climate policies. [1]

Signatories, who identify themselves as “qualified in climate-related matters,” claim that extreme weather is not linked with climate change and that as a result “There is no sound reason for the costly, restrictive public policy decisions proposed at the U.N. climate conference in Qatar. Rigorous analysis of unbiased observational data does not support the projections of future global warming predicted by computer models now proven to exaggerate warming and its effects.”

The letter was in response to Ban Ki-Moon’s statement at the General Assembly earlier in 2012 that “Extreme weather due to climate change is the new normal … Our challenge remains, clear and urgent: to reduce greenhouse gas emissions, to strengthen adaptation to … even larger climate shocks … and to reach a legally binding climate agreement by 2015 … This should be one of the main lessons of Hurricane Sandy.”

Those who signed the letter replied that “We the undersigned, qualified in climate-related matters, wish to state that current scientific knowledge does not substantiate your assertions.” They claim that “There is little evidence that dangerous weather-related events will occur more often in the future.” The letter also specifically asks that we avoid enacting policies to counteract man-made global warming, but rather to “adapt”:

“We also ask that you acknowledge that policy actions by the U.N., or by the signatory nations to the UNFCCC, that aim to reduce CO2 emissions are unlikely to exercise any significant influence on future climate. Climate policies therefore need to focus on preparation for, and adaptation to, all dangerous climatic events however caused.”

Vijay Kumar Raina is listed as a registered endorser of “The Climate Scientists’ Register,” a project of the International Climate Science Coalition. Endorsers must agree that “having assessed the relevant scientific evidence, do not find convincing support for the hypothesis that human emissions of carbon dioxide are causing, or will in the foreseeable future cause, dangerous global warming.” [4]

VK Raina authored a “discussion paper” (PDF) that was published by the Ministry of Environment and Forests (Government of India) that suggests that the Himalayan glaciers and glaciers throughout the world have retreated and advanced with no direct link to global climate change. “This is one of the many issues of climate change science that we do not fully understand,” he said. [5]

The report has been cited by climate change skeptics including Madhav L. Khandekar as support that global warming does not necessarily result in the retreat of glaciers in the Himalayas. [6]

One source said that the report “rubbished the global line of thought and claimed that there was no evidence of climate change causing ‘abnormal’ shrinking of the Himalayan glaciers has left the world in quandary.” The report was supported by India’s Environment Minister Jairam Ramesh. [7]

Rajendra Pachauri, chairman of the IPCC, told The Guardian that “We have a very clear idea of what is happening. I don’t know why the minister [Jairam Ramesh] is supporting this unsubstantiated research. It is an extremely arrogant statement.” He also noted that the report was not peer reviewed and that it had few scientific citations. [8]

According to this source, VK Raina has authored over 100 scientific papers and three books:  Glacier Atlas of India dealing with various aspects of glacier studies under taken in the Himalayas; Glaciers, the rivers of ice and Images Antarctica, Reminiscences, (Chandigarh, India). [4]

According to a search of Google Scholar, V. K. Raina has published the following with a subject area of “climate.” These papers have not necessarily been peer-reviewed, and at least one is listed as a “discussion paper”: