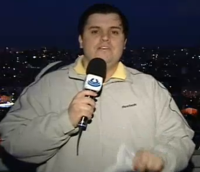 Alexandre Aguiar is the Meteorologist and forecaster for the MetSul Weather Center of Ulbra TV in Porto Alegre, Brazil.

He is a contributor to the International Climate and Environmental Change Assessment Project (ICECAP), a website promoting climate change skepticism.

Aguiar believes that severe weather events are not connected to global warming:

He also believes that the earth may be cooling. [2]

“During a summit in Chile King Juan Carlos of Spain told the president of Venezuela Hugo Chavez to shut up: ‘Por qué no te callas’ (Why do you not shut up?). Someone must tell Al Gore the same or invite him to visit this corner of the world. It is a never ending winter here in South America.” [3]

Alexandre Aguiar posted an article on the Metsul blog, which was republished by Sun and Climate Change, where he criticizes Brazilian media for associating global warming with extreme weather events: [8]

“To establish the ongoing catastrophe in Brazil as a global warming product is a false claim in the view of the MetSul Meteorology staff.” [8]

Aguiar originally published his article on the MetSul Blog.

Speaker at the Heartland Institute’s 2009 International Conference on Climate Change. See video below:

Aguiar claims to have refuted Al Gore’s forecast of a future without (cooling) La Niña events.

“It will take some more years for ‘Mother Nature’ to dismiss some or all of Gore forecasts,” he concluded, “but earlier predictions made by him are already proving to be an inconvenient mistake.” [5]

Aguiar does not appear to have published any articles in peer-reviewed journals.

A list of his skeptical publications is available at ICECAP.