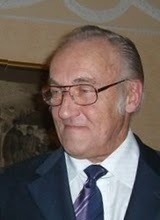 Dr. Boris Winterhalter is a retired marine researcher of the Geological Survey of Finland, and former professor of marine geology at University of Helsinki. [1]

He operates three blogs (in Finnish). The first, Ilmasto on luonnostaan muuttuva (roughly translating to “the climate is naturally variable”) which “deals mainly with political issues and my critique of the offical [sic] climate doctrine in Finland.”[2]

Winterhalter is a signatory to the International Climate Science Coalition’s ”Climate Scientists’s Register,” which states:

“We, the undersigned, having assessed the relevant scientific evidence, do not find convincing support for the hypothesis that human emissions of carbon dioxide are causing, or will in the foreseeable future cause, dangerous global warming.” [3]

Winterhalter presented at a climate seminar at Gothenburg. The following is from his PowerPoint presentation (PDF):

“Although some outflow glaciers are retreating in Greenland, it seems that the net accumulation of snow counteracts this loss in ice and there is no imminent danger of sea level rise.

“In northern Europe we enjoy a temperate climate thanks to the prevailing south-westerlies and there are no indications of a change in pattern.” [4]

“The effect of solar winds on cosmic radiation has just recently been established and, furthermore, there seems to be a good correlation between cloudiness and variations in the intensity of cosmic radiation. Here we have a mechanism which is a far better explanation to variations in global climate than the attempts by IPCC to blame it all on anthropogenic input of greenhouse gases.” [5]

Boris Winterhalter was a signatory of a petition (PDF) organized by Richard Lindzen of the Cato Institute urging President Donald Trump to pull the United States out of the United Nations international convention on climate change (UNFCCC). [7]

“In just a few weeks, more than 300 eminent scientists and other qualified individuals from around the world have signed the petition below,” Lindzen wrote in the letter. [7]

Media outlets including Fox News, The Hill, and the Daily Caller reported on the list, describing signatories as “eminent scientists” and “qualified individuals.” [8], [9], [10]

Winterhalter is listed as a signatory of the International Climate Science Coalition’s “Climate Scientists’ Register.” [3]

Winterhalter’s name was included a Lavoisier Group submission to the Garnaut Climate Change Review. The document asserts, among other things, that “Claims by the International Panel on Climate Change (IPCC) assertions that the ‘science’ of global warming is ‘settled’ are self serving and false.” [13]

“Many well qualified scientists, see Attachment A, believe temperature changes, up and down, are driven by changes in solar behaviour, and that “Greenhouse” gases have negligible influence on the modest 20th Century warming. Many believe a cooling period will set in within 10 to 15 years.” [13]

The “Science List” is made up of those who previously signed an open letter to UN Secretary General Ban Ki-moon during the Bali climate conference. [13]

This letter describes global warming as a natural phenomenon, and expresses how carbon dioxide is a “non-polluting gas that is essential to plant photosynthesis.”  It also claims that the IPCC reports are “inadequate as justification” for implementing climate change policy. [14]

Winterhalter is listed as a reviewer of the Independent Summary for Policymakers (ISPM) of the IPCC Fourth Assessment Report. [6]

According to a search of 22,000 academic journals, Winterhalter has not published peer-reviewed research on climate.

He has had four peer-reviewed articles, all related to marine geology, the first published in 1970, the rest between 2000 and 2002.