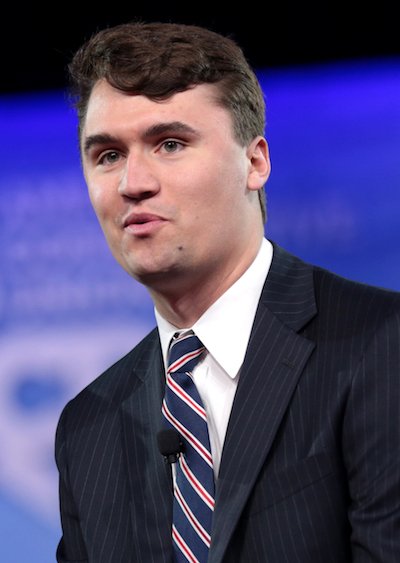 Charlie Kirk is the founder and executive director of Turning Point USA (TPUSA), a youth conservative activist organization with the mission “to identify, educate, train, and organize students to promote the principles of freedom, free markets, and limited government.” [2]

When he was 18 years old, Charlie Kirk launched TPUSA with the guidance of William Montgomery and seed funding from Foster Friess, a conservative donor with ties to the Koch brothers. TPUSA now claims a presence on over 1,000 college campus and high schools across the country, and label themselves the largest and fastest growing youth organization in America. [1], [3], [4]

According to his profile at TPUSA, Kirk has appeared on Fox News, CNBC, and FOX Business News over 200 times. He is the author of Time for a Turning Point, a book that he has promoted through the Heartland Institute. [2]

Charlie Kirk is a regular speaker at the Conservative Political Action Conference (CPAC).

Charlie Kirk has admitted to soliciting funds from the fossil fuel industry. He acknowleded in an interview that some donors of TPUSA “are in the fossil-fuel space.” He was a speaker at the 2017 board meeting of the National Mining Association (NMA) and the 2016 annual meeting of the Independent Petroleum Association of America (IPAA). The CEO and president of the IPAA, Barry Russell, is on the advisory council of TPUSA. Kirk has stated that most advisory council members contribute monetary support to the organization. A full list of TPUSA advisory council members can be found on their website. [5], [6]

TPUSA has helped organize opposition to student campaigns pressuring universities to divest from fossil fuels. In an interview with the The New Yorker, Kirk said, “We think targeting fossil fuels is rather unfair, and it is not really in the best interests of the universities to favor one type of political agenda over another.” [5]

Charlie Kirk’s father, Robert W. Kirk, was the project architect manager for Trump Tower in New York. Charlie Kirk volunteered for Donald Trump’s Trump’s presidential campaign, devoting two months during the election cycle. Kirk has consistently praised Trump, his family, and the Trump Administration in social media and in news outlets like Fox News. He also appeared along alongside the presidential family on the Hannity show. [7], [8], [9]

In December 2017, Trump tweeted his thanks to Kirk for praising his performance as President:

“The President has accomplished some absolutely historic things during this past year.” Thank you Charlie Kirk of Turning Points USA. Sadly, the Fake Mainstream Media will NEVER talk about our accomplishments in their end of year reviews. We are compiling a long & beautiful list.

So proud to have this amazing leader as our President #MAGA pic.twitter.com/dvTVBXK2mS

On Twitter, Kirk described the Paris Climate Treaty as “A BAD Deal for America!”

Everything You Need To Know About The Paris Climate Treaty!

Charlie Kirk was among dozens of the individuals and organizations profiled in DeSmog’s Disinformation Database who posted online or gave interviews about the events surrounding the Jan. 6, 2021 Capitol insurrection. Some posted claims of election fraud, similar to those that drove the Stop the Steal rally on Jan. 6. Some circulated dubious information about the insurrection itself. DeSmog has preserved a selection of notable posts related to the events of Jan. 6, 2021, including some that were later deleted or removed. Kirk published and later deleted multiple tweets related to the Capitol insurrection on Jan. 6, 2021 and the “Stop the Steal” event.

“The founder of Turning Point USA, Charlie Kirk, said in a since-deleted tweet that Turning Point’s political action arm and an affiliated group, Students for Trump, were sending more than 80 ‘buses of patriots to D.C. to fight for the president’ on Jan. 6,” The New York Times reported. “While 80 buses was the number that Turning Point Action had committed to funding, Mr. Kirk’s tweet was ‘ultimately inaccurate’ as the groups ended up sending just seven buses from New Jersey, North Carolina, and other locations, according to a spokesman for Turning Point.” [33] @realCharlieKirk also posted this encouragement to “hold the line, Patriots” on Gab on Jan. 11:

Kirk also posted the following message on Twitter during the early morning hours of Jan. 7, 2021, in the immediate aftermath of the Capitol insurrection:

At the Conservative Political Action Conference in 2018, Kirk stated while on a panel: [15]

“College campus have become a place where they want everyone to look different but think the same. Let me say that again, they want college campus to be a place where everyone looks different but thinks the same. And their idea of diversity is skin color and ethnic diversity which is fine there is nothing necessarily wrong with that but that’s easy.

It’s the intellectual ideological diversity, thats where maturity happens, that’s where you have to hear things that challenge your view point. And when you have an education system that is so dominated by neo-marxists and post-modernists you have a whole education system that is just spinning out leftist automatons that have no capacity to think. We as conservatives- the left has feelings. We have history and logic and perspective and understanding of where our ideas come from and that’s really at the core of the issue.”

“The story of western civilization is overcoming victimhood. It’s I might suffer but I can make good choices to overcome my bad circumstances. The left wants the exact opposite. It’s ‘oh you might have had something bad happen to you a hundred years ago therefore heres all these government benefits and people should feel sorry for you’.”  (Emphasis added).

In his interview with The New Yorker, Kirk said: [5]

“We think targeting fossil fuels is rather unfair, and it is not really in the best interests of the universities to favor one type of political agenda over another.”

“Students are indoctrinated to believe the myth that fossil fuels are dirty and renewable energy is a plausible alternative,” Kirk wrote.

At a speaking event for young conservatives, Kirk said he didn’t get accepted to his first choice university, West Point, because “I eventually lost my spot to what I felt was a far less qualified applicant in my district that was of a different gender and persuasion.” [18]

The accomplishments are historic, fixed the trajectory of America, and are beginning the process of turning this country around! #MAGA pic.twitter.com/Rhlf8bVim7

Charlie Kirk: “One of the things you’ve done so successfully during your campaign and presidency is crush political correctness, and what the college network that we represent—I represent a network on 1200 college campuses—is, it’s harder than ever to espouse support of your presidency and the ideas that you’re fighting for.

So thank you for what you’re doing to give us the courage of our convictions to fight against political correctness. But what advice do you have for young patriots and Conservatives on campus that support your agenda but are being ridiculed and silenced because of administrators that clamps own one see speech?”

Trump: “So that’s a great question. I think the numbers are actually much different than people think. I think we have a lot of support. If they have one campus or two campuses and we know what they are it gets all the publicity. We have campuses where you have a vast majority of people that are perhaps like many of the people in this room: You could call it Conservative, you could call it whatever you want, but they’re people that want free speech.

Kirk: “I totally agree, and we see it on the ground. And so people say, hey I’m a Trump supporter, I’m just not allowed to say it because of the culture that’s been created by the administrators and the professors.

And kind of piggybacking off of that, what you see on college campuses and the speakers being disinvited and you know the assault on these ideas, I think it’s so important what your administration is doing for the Department of Justice to support these lawsuits to help advance, you know, this free speech movement on campus.

So, kind of talking generationally in general, this is something I’m quite curious about and lot of people ask me: I consider you to be one of the most successful businesspeople in American history and your successful presidential run is something that all people, young people included, should look up to. What advice would you give to the 25-year-old Donald Trump knowing what you know today?

Trump:“Well, I was talking to Mercedes and Sarah walking off for just a… you know the Oval Office is right across the street… and I said, all my life I’ve gotten really—you know look, every one in a while we all get a knock—but I got the greatest publicity. I was getting such great… until I ran for office. And it’s been… but people get it. People really do get it. [12:07]

There is a lot of fake news out there. Nobody had any idea, and I’m actually proud of the fact I exposed it to a large extent because we exposed it. That’s something… that’s an achievement.” […]

Charlie Kirk was a speaker at the 2018 Conservative Political Action Conference (CPAC). [31]

Kirk spoke at the David Horowitz Freedom Center’s “Restoration Weekend” in 2017. The Southern Poverty Law Center has described the Freedom Center as “the premier financier of anti-Muslim voices and radical ideologies.” [19], [20]

In his speech, Kirk described the David Horowitz Foundation as a “cornerstone of the growth of Turning Point U.S.A.” He also thanked “so many amazing supporters in this room that have made it possible.” He personally thanked David Horowitz saying, “I can’t thank you enough for your mentorship and guidance and advice throughout the years, so thank you.” [19]

At the same event in 2015, Charlie stated, “I can honestly say that our success now as an organization – we have over 61 full-time staff, 53 in the field – is large in part because of the embracing of Horowitz Freedom Center attendees, staff and Mike Finch.” [19]

The New Yorker reported that Charlie Kirk attended the 2017 board meeting of the National Mining Association (NMA). According to The Intercept, and E&E News, the meeting was scheduled to take place at the Trump International Hotel in Washington, D.C. and featured some of the largest coal and mining companies in the country. [5], [21], [22]

Rooms for the days scheduled cost approximately $800 per night. Election law expert Brendan Fischer commented that, because Trump had refused to divest from the Trump Organization, “money spent at the president’s D.C. hotel will make it into the president’s pocket.” [21]

“The National Mining Association or any other lobbying group has likely concluded that spending money at the Trump International Hotel in D.C. is a solid way of currying favor with the administration — and that spending money anywhere else runs the risk of offending our very sensitive president,” he added. [21]

According to the event invitation, “The evening reception on the rooftop will be the first reception since the 2016 elections and will provide an excellent opportunity to meet the new members of Congress, build on our relationships, and share our perspectives with our guests from Congress and federal agencies.” Interior Secretary Ryan Zinke was scheduled to speak at the event. [21]

Kirk was a speaker at the 2017 Conservative Political Action Conference (CPAC). TPUSA was also on site with a recruitment effort that included about 100 students. [23], [24]

Kirk appeared with Brent Hamachek, his co-author of Time for a Turning Point, on the Heartland Institute’s daily podcast. Kirk and Hamachek talked about Turning Point USA, Donald Trump’s election, and “the appalling lack of knowledge in that generation about the murderous history of global communism” among other subjects. [25]

Kirk and Hamachek were also featured in a February 8 Heartland special event and book signing, billed as “two men on the front lines of the battle against leftist indoctrination of the Millennial Generation.” See video of the event below. [26], [27]