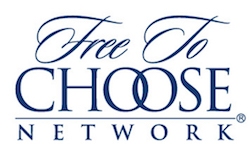 The Free to Choose Network is a a non-profit foundation that arose from Milton Friedman‘s 1980s PBS series, “Free To Choose” and the resulting book. The group’s founder, Bob Chitester, was the PBS program’s executive producer and sought to “expose a world hindered by big government to Friedman’s concepts of limited government, individualism, and the US Constitution.” [1], [2]

The late Milton Friedman was an advocate of free markets and past was fellow at the Hoover Institution which SourceWatch reports has received grants from ExxonMobil, Koch Foundations and other right wing foundations such as the Sarah Scaife Foundation. [3]

Bob Chitester also ran the now-defunct Palmer R. Chitester Fund, a libertarian 501(c)(3) nonprofit  based in Pennsylvania which appears to have merged/now operates as Free to Choose Network (they share the same EIN).  Free to Choose Media and a group called Izzit.olrg were both “operating divisions” (PDF) of the Palmer R. Chitester Fund and work to reproduce programs and videos regarding classical liberal ideas. Izzit.org, (formerly In the Classroom Media) describes itself as an “educational initiative of the Free to Choose Network” and produces media for children. Izzit.org notably distributed climate change denial videos funded by the Heartland Institute to schools in the United States. [4], [5], [6]

The following is a quote from Roy Spencer, promoted in an Izzit DVD (a group supported by the Free to Choose Network): [8]

“So the truth is out. And it really is inconvenient: The earth is probably warming a little bit – and man probably doesn’t have that much influence. If we were to take draconian measures to change our miniscule contribution, we’d be shooting ourselves in the economic foot (especially when we can currently do absolutely nothing about the behavior of the sun).”

The following funding are taken from the Conservative Transparency Project, based on publicly-available 990 tax returns. Note that not all funding values have been verified by DeSmogBlog. [9]

View the attached spreadsheet for additional details on Free to Choose Network funding by year (.xlsx).

The Free to Choose Network has received over $600,000 from Donors Trust, and nearly $3 million from Donors Capital Fund, two groups that anonymously distribute donations.

DCF has been a major funder of the Heartland Institute, and has given money to numerous other organizations skeptical of man-made climate change. Mother Jones has described the Donors Capital Fund as the “Dark money ATM of the conservative movement.” [10], [11]

As of 2011, the following directors were also listed on Free to Choose’s website: [13]

According to Cato Institute’s description: [15]

“While bringing electricity to many remote villages in India and the Sahara causes an increase in carbon emissions, it also allows families to have refrigeration for their food, electricity to light their homes and the time to develop their lives beyond working just to sustain themselves every day.   ‘Don’t they deserve the same kinds of life changing benefits that power has brought the west?’ Norberg asks.”

Free to Choose Network is listed as a “Silver Sponsor” of the Heartland Institute’s Seventh International Conference on Climate Change (ICCC7). [16]

DeSmogBlog researched co-sponsors behind the conference and discovered that they had received a total of over $67 Million from ExxonMobil, Koch, and Scaife family foundations. [17]

The Free to Choose Network was a co-sponsor (PDF) of the Heartland Institute’s Fourth International Conference on Climate Change (ICCC4). [18]

The Free to Choose Network was a co-sponsor of the Heartland Institute’s Third International Conference on Climate Change (ICCC3). [20]

The Free to Choose Network was a co-sponsor of the Heartland Institute’s Second International Conference on Climate Change (ICCC2) in New York. [21]

DeSmogBlog found that the conference’s sponsors had received over $47 milion in funding from energy companies and right-wing foundations. [22]

The Idea Channel produced a video that was funded and distributed by the Heartland Institute titled “Unstoppable Solar Cycles: Rethinking Global Warming.”

A version of the video was distributed to schools by the advocacy organization Izzit.org, which describes itself as the “educational initiative of the Free To Choose Network” and included a “Teacher’s Guide” (PDF) and lesson plan — Which the Heartland Institute co-promoted on their own website.  [5], [23], [24], [25]

According to Free to Choose Network, “What we learn in this program is that earth’s climate is always changing—from The Middle Ages and the ‘Little Ice Age’ to the modern warming that has been going on since 1850—well before human-generated CO2 began increasing in our atmosphere.”

View sample of the video, produced by the Idea Channel, below:

Rie Oldenburg, curator of the Narsaq Museum was interviewed in the video. She later said that she had been tricked into participating. She had thought she was contributing to a video on Norse history, and was shocked to learn that the DVD denied the human contribution to climate change. [6]