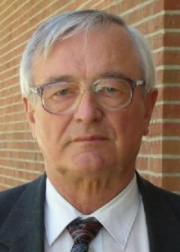 Gerlich co-wrote a 2007 paper titled “Falsification Of The Atmospheric CO2 Greenhouse Effects Within The Frame Of Physics” that has been widely cited in the skeptic community as refutation for the existence of man-made global warming.

Gerlich spoke at the Leipzig Conference on Climate Change, quoted below (translated via Google Translate):

“The CO 2 greenhouse effect of the Earth’s atmosphere is a pure fiction of people who like to use large computers, without physical bases.” [2]

The following is taken from a paper by Gerlich and Ralf D. Tscheuschner titled “Falsification Of The Atmospheric CO2 Greenhouse Effects Within The Frame Of Physics”:

“The main strategy of modern CO2-greenhouse gas defenders seems to hide themselves behind more and more pseudo explanations, which are not part of the academic education or even of the physics training.” [3]

Gerlich published a paper titled “Falsification Of The Atmospheric CO2 Greenhouse Effects Within The Frame Of Physics” in the International Journal of Modern Physics (IJMP).

The paper has was widely cited in the skeptic community as refutation for the existence of man-made global warming and has been mentioned by many skeptical science sites like Climate Research News and Greenie Watch.

Another article, also published by the International Journal of Modern Physics (this in 2010), thoroughly refutes the Gerlich and Tscheuschner paper. Other sources have since released refutations or responses (for example, here and here). [4]

Gerlich is a signatory to an open letter to Secretary-General Ban Ki-Moon which concludes that “Attempts to prevent global climate change from occurring are ultimately futile, and constitute a tragic misallocation of resources that would be better spent on humanity’s real and pressing problems.” [5]

Gerlich signed the subsequent Leipzig Declaration on Climate Change. The declaration states that “there does not exist today a general scientific consensus about the importance of greenhouse warming from rising levels of carbon dioxide. In fact, most climate specialists now agree that actual observations from both weather satellites and balloon-borne radiosondes show no current warming whatsoever…” [10]

The original report was published July 30, 2007. A revised version was published  January 6, 2009. There is also an approved non-technical summary (PDF) written by Hans Schreuder June 24, 2008.

According to SkepticalScience, Gerlich has not published any peer-reviewed papers relating to climate change. [11]