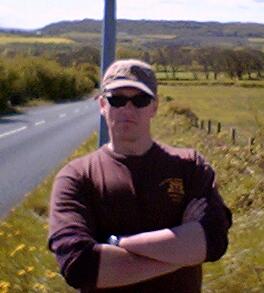 Lewis Page served as an officer in the Royal Navy from 1993 to 2004, and is now an author and authority on military matters. His books include Lions, Donkeys and Dinosaurs: Waste and Blundering in the Military which was published in 2006. He is a regular contributor to The Register and Prospect magazine. In 2007, Page started a full-time staff position at The Register, and in 2011 he became the editor and the man “running the show.” Page has published a large number of articles promoting science that is skeptical of climate change. [2], [3]

Based on a large number of articles published by Lewis Page in The Register, Page has promoted a range of views regarding climate change including that:

“With the recent gradual scientific acceptance – even among scientists who have spent their whole lives studying the subject – that global warming is simply much less significant than had been thought, the chance of anyone caring enough to take action is now even lower.” [4]

“A vote for that politician [a climate change skeptic] is a vote against this sort of vicious price rise, this sort of stealth tax targeted on ordinary folk who find their energy bills a significant cost – the sort of hit that most of us will find pretty painful, given the current economic climate.” [5]

“It would seem that this is highly unlikely [that the Antarctic ice sheet might melt due to global warming] given current and near-future levels of atmospheric CO2: at current rates of increase it will take a century at least to reach 600 ppm, the level at which the ice sheet formed itself, and higher levels would be needed to actually start it melting.” [6]

“All the carbon-spewing machinery the human race now possesses – powerplants, transportation, boilers, the lot – can be kept running for its entire designed life without any significant ill effects on the planetary ecosystem […]” [7]

Writing for The Register, Lewis Page promotes a study by Norwegian researchers that indicates “humanity’s carbon emissions produce far less global warming than had been thought: so much so that there is no danger of producing warming beyond the IPCC upper safe limit of 2°C for many decades.”

The title of Page’s article (“Climate shocker: Carry on as we are until 2050, planet will be FINE”) suggests that climate change action is unnecessary.

According to Page, while “the argument will still be made that carbon emissions should be reined in sooner or later, […] global warming is simply much less significant than had been thought.”  [4]

In an article for The Register, Lewis Page promotes research that suggests the Greenland ice sheet will not melt. According to Page, “the models are evidently wrong and another IPCC doom warning has been consigned to the dustbin of history.” [8]

Published an article for The Register suggesting that “at the time of the Pharaohs the world’s climate was significantly hotter than it now is for thousands of years.” [9]

In an article for The Register, Page claims that global warming is “stalled” and that “global warming has failed to occur for approximately the fourteenth year running.” [10]

Page published an article suggesting that “planetary warming, which effectively stalled around 1998, has yet to resume at the levels seen in the 1980s and early 1990s.” [11]

In an article in The Register, Page suggests that “one of the main factors predicted to drive rising sea levels in future has been seriously overestimated.” [12]

Lewis Page suggests that “there has in fact been no measurable increase in droughts over the past 60 years.” [13]

Lewis Page promoted a study suggesting that carbon emissions may save humanity from an ice age: “spreading peatlands are inexorably driving planet Earth into its next ice age, and the only thing holding back catastrophe is humanity’s hotly debated atmospheric carbon emissions.” [14]

“A vote for that politician [a climate change skeptic] is a vote against this sort of vicious price rise, this sort of stealth tax targeted on ordinary folk who find their energy bills a significant cost – the sort of hit that most of us will find pretty painful, given the current economic climate.” [5]

According to Lewis Page’s article in The Register, “there is little to fear from rising sea levels driven by global warming.” [15]

Lewis Page writes in The Register about research that “might indicate an upcoming ‘mini Ice Age’” due to a “statistical link between periods of low solar activity and very cold winters in Europe.” [16]

Page suggests that “geo engineering” could be “hugely less costly and traumatic for humanity than the efforts required to seriously cut carbon emissions – and thus, that geo-engineering might be politically feasible, which so far doesn’t seem to be the case for global carbon cuts.” [17]

Page published a number of articles in The Register (here, and here) where he promotes the Medieval Warm Period theory which suggests that because climate was warmer in the past that man-made CO2 emissions will have little influence. See this theory debunked at Skeptical Science. Page also published an article in March 2012 where he suggests that the warm period in “medieval times was not limited to Europe, or the northern hemisphere: it reached all the way to Antarctica.”

Lewis Page promoted a widely-debunked letter that first appeared in the Wall Street Journal suggesting there is “No Need to Panic About Global Warming.” The signatories to the letter, which Page describes as “eminent scientists and engineers,” have all been found to have either (or both) significant connections to the oil and gas industry or no scientific experience related to climate change. [18], [19]

According to Lewis Page’s interpretation of the science, “Global warming is actually good for rainforests” and that “even if temperatures do climb as many forecasters predict, the consequences may not be disastrous after all.” [20]

Lewis Page suggests that global warming may be caused by the sun, which “downplays the influence of human-driven carbon emissions.” [21]

Page suggests that global warming may be “normal at this point in [the] glacial cycle.” [22]

Lewis Page has published a large number of articles for The Register as well as Prospect magazine. A full list of his publications at The Register is available here.