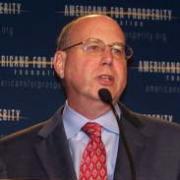 Pope has closed ties to the Koch Brothers. According to one article, Pope is “one of the most trusted members of the Koch’s elite circle: He has been a regular invitee to the Koch’s secretive, semiannual gathering of the major right-wing donors and activists.” He is also a “valuable junior partner in many key Koch operations.” [2]

He is also the director of the right-wing Americans for Prosperity, as well as a member of the board of directors for the John Locke Foundation and past board member of the Atlas Economic Research Foundation. [3]

The John Williams Pope Foundation is a key funder of Americans for Prosperity which in turn is one of the principal organizers of the Tea Party Patriots. [4]

Pope also backs the Civitas Institute and its sister group Civitas Action. From 2005 to 2009 the Pope Foundation accounted for 99 percent of the Institute’s income. Pope was a founder of Civitas Action, a group that campaigns for climate change skeptics.

“I think that climate change and global warming represent important public policy and scientific debates. I think the John Locke Foundation is playing an important role in that.” [5]

According to a Facing South/Institute for Southern Studies analysis of annual tax filing from the John William Pope Foundation, Pope’s family fund gave almost $5.7 million from July 2011 through June 2012 to conservative think tanks and advocacy groups working to deny global warming is happening, and driven at least in part by human activities. That represents 61 percent of total giving for the year by the Pope Foundation. [16]

According to the Institute for Southern Studies, Art Pope is an ally to the Koch Brothers in funding the network of climate change skepticism. From 1997 to 2008 the Koch’s gave $48.5 million to organizations denying climate change. During the same time period, Pope contributed $24.1 million. [7], [8]

A 2010 Facing South / Institute for Southern Studies analysis of tax records found that a foundation chaired by Art Pope supplies about 90 percent of the income of leading conservative nonprofits in North Carolina. [9]

Pope not only funds conservative non-profits but also influences state-level political elections, The New Yorker found. North Carolina Governor Bev Perdue commented that “The Republican agenda in North Carolina is really Art Pope’s agenda. He sets it, he funds it, and he directs the efforts to achieve it. The candidates are just fronting for him. There are so many people in North Carolina beholden to Art Pope—it undermines the democratic process.” [10]

The effort was described by The Herald Sun as an effort by Pope to influence the legislative elections. [11]

Art Pope does not appear to have published any significant works.