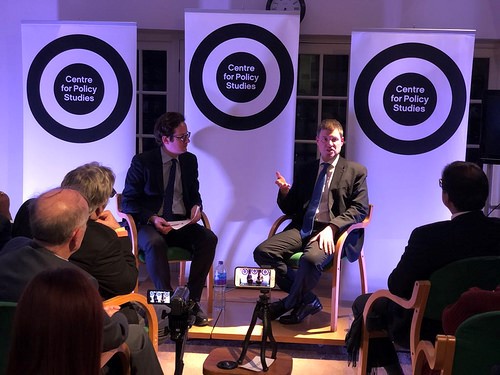 The Centre for Policy Studies (CPS) is a free-market thinktank founded by Sir Keith Joseph and Margaret Thatcher in 1974, promoting an ideology of small government and economic liberalism.

Although the Centre claims to be non-partisan, historically it has been closely linked to the Conservative Party, with a strong influence on British politics since it was founded.

In 2014, the Centre for Policy Studies launched CapX, a news site designed to promote “popular capitalism” and “defend free markets.” Its editor-in-chief is Robert Colvile, director of the CPS and previously Head of Comment at the Daily and Sunday Telegraph.

The CPS is chaired by businessman and Conservative donor Michael Spencer, recently appointed to the House of Lords. Its deputy chairman is Sir Graham Brady, also chairman of the 1922 Committee of backbench Conservative MPs.

Other board members include Lord Bamford, the Brexit-supporting chairman of the construction giant JCB and a past backer of the TaxPayers’ Alliance

Until January 2020, the CPS was chaired by Lord Saatchi, co-founder of the Saatchi and Saatchi advertising company and former chairman of the Conservative Party.

Tom Clougherty, the CPS‘s Head of Tax, was previously executive director of the Adam Smith Institute, another free-market think tank, before moving to the US to become managing editor at the Reason Foundation, a libertarian group that has frequently downplayed the threat of climate change, as well as senior editor at the Koch-funded Cato Institute. Callum Price, Head of External Relations, has previously worked at the TaxPayers’ Alliance and the Institute of Economic Affairs.

The CPS has regularly published work by climate science denier and anti-renewables advocate Rupert Darwall, who was previously listed as a Research Fellow on the organisation’s website and has written for the Global Warming Policy Foundation.

More recently, the CPS has published a number of reports and essays calling for greater action on climate change, including through a “carbon border tax” focused on carbon-intensive industries.

CPS director Robert Colvile wrote a comment article in the Times arguing that parts of the UK with the potential for large clean technology sectors, such as wind energy, hydrogen and electric vehicles, “could well be the Tories’ new industrial heartlands”.

“Any serious effort will be beset by vested interests — both people pleading for money for their pet projects, and the “green blob” seeking to lure the government into ever more interfering, meddling, regulating and taxing in the name of saving the planet. And nothing will ever be enough for Greta, who will continue to howl green murder.”

The CPS republished a Wall Street Journal article by Rupert Darwall entitled “The Political Science of Global Warming” in which he argued that the  “U.N.’s latest climate change report should be its last,” asking:

“How can the IPCC be more confident that more than half the temperature rise since the mid-20th century is caused by greenhouse-gas emissions when it is less sure of the climatic impact of carbon dioxide? The explanation is that IPCC reports, especially the summaries for policymakers, are primarily designed for political consumption.”

“The body’s flagrant disregard for the InterAcademy Council’s findings and its reluctance to address the 15-year warming pause are symptomatic of a failure of leadership. The conclusion is unavoidable: The IPCC is unreformable and the Fifth Assessment Report should be the IPCC‘s last.”

The CPS released a publication entitled Climate Change: a guide to the scientific uncertainties by Martin Livermore, director of the Scientific Alliance, a group that rejects mainstream climate science, stating:

“The scientific understanding of climate change is far from complete (despite claims to the contrary).”

“it is really weird to be mounting a dogged Nimbyist campaign against a thing most people really like (including farmers/the NFU). Especially at a time when producing more cheap, secure, renewable energy in your own country might be a really good idea”

Centre for Policy Studies director Jon Moulton wrote an article for the Institute of Chartered Accountants in England and Wales (ICAEW) in which he wrote: “If the UK was to reduce its emissions to nothing by 2050, it would have no detectable effect unless the rest of the world did the same thing. But there’s no sign at all that this would happen.”2Jon Moulton. “What price the UK net-zero target?”, ICAEW, Archived November 1, 2022. Archive URL: https://archive.ph/IkKNX

Moulton – who wrote in the first paragraph “I’m not a climate-change denier” – also cited the work of controversial scientist Steven Koonin to defend his perspective.

“You can easily conclude that the UK’s net-zero target is a very bad deal for the British people. It won’t protect them against climate change; the costs are disproportionate to the threat; and those costs are ruinous in themselves. This legally binding target doesn’t make sense. Readers should rely more on numbers and less on emotion”.

Tony Lodge, research fellow at the Centre for Policy Studies, was quoted in The Telegraph, commenting on an incident in which France threatened to cut off Jersey’s power supply. Arguing that this “helped expose Britain’s growing overdependence on imported power,” Lodge stated: “Ministers must now prioritise energy security in tandem with decarbonisation.”

Advocating for the development of a reliable supply of domestic energy, Lodge was quoted as saying: “The real key for weather dependent renewables is storage,” adding: “My concern has always been being on the end of wires from the Continent.”

The CPS published a report which advocated for the development of the UK’s nuclear power sector, stating that nuclear energy “could also play a significant role in decarbonising heat that is currently generated via fossil fuels.” While the report acknowledged the advantages of renewable energy, stating that nuclear power “would complement Britain’s booming renewables portfolio and help to manage periods of variability,” the press release accompanying it stated that the lack of investment in nuclear energy “could lead to the government having to choose between meeting Net Zero and keeping the lights on.”

Richard Sharp, a CPS board member, was named as Chairman of the BBC, stepping down from the CPS board at the same time.

The government announced that the CPS’ Director Robert Colvile was one of four ‘experts’ appointed to the Strategic Trade Advisory Group (STAG), described as a “forum for high-level strategic discussions between government, and stakeholders representing a cross-section of interests from all parts of the UK on trade policy matters.”

Writing in The Times in response to protests outside 55 Tufton Street, where the CPS is based, Robert Colvile, its Director, claimed that “everywhere you look, people are quietly and seriously getting on with working out how to make the economy greener without making the public poorer. All Extinction Rebellion is doing — apart from making a titanic nuisance of itself — is making environmental progress harder, by convincing normal people that going green is going to be a massive headache.”

Colvile also wrote, “as a journalist I’ve written repeatedly about climate change, and devoted chapters of my book about the acceleration of modern life to humanity’s alarming impact on the planet.” Colvile suggested that BP and other large corporations had made significant efforts to adopt green technologies, and that Extinction Rebellion advocated a return to the soil.  1

The CPS published a report by Research Fellow Tony Lodge calling for a carbon border tax, a summary of which said the upcoming COP26 UN summit was a “chance for Britain to show global leadership – and incentivise our trading partners to lower their own emissions”.

Along with Civitas, and the Institute of Economic Affairs (IEA), the Centre for Policy Studies received the lowest possible score from independent watchdog Transparify in its latest transparency ratings, as reported by DeSmog UK. The score referred to levels of transparency in expenditure and funding sources, and the report by Transparify included CPA in a list of seven “highly opaque and deceptive think tanks in Britain that take money from hidden hands behind closed doors”.

DeSmog UK previously revealed how the CPS, IEA, and Civitas operate as part of a network of organisations based around Westminter’s 55 Tufton Street that pushed for the UK to leave the EU while spreading climate science misinformation.

A new pro-Brexit think tank called The Institute for Free Trade (IFT) was launched, sharing an office at 57 Tufton Street with the Centre for Policy Studies.

The president of the IFT is Tory MEP Daniel Hannan, who has previously spoken events hosted by the US-based Heritage Foundation, a known anti-environmental group. This represents another link in the network of connections between the UK’s pro-Brexit figures and US climate science deniers.

Lord Howard Stanley Kalms, director of the Centre for Policy Studies between 1991 and 2001, donated £10,000 to the Vote Leave campaign, bringing his total donations to the group to £40,000.

Kalms’ link to the Vote Leave group serves to further display the network of connections between pro-Brexit lobby groups and climate science denial, as DeSmog UK has previously mapped.

The Centre for Policy Studies publishes ‘Climate Change: a guide to the scientific uncertainties’, a document that downplays the issue of anthropogenic climate change and claims that the science behind it is not settled. Within it, the group describe international climate policy such as the Kyoto Protocol as “punishment”.

The author of the document was Martin Livermore, who is on the advisory board of the Scientific Alliance, a climate science denial group.

Then Director of CPS, Ruth Lea suggested in a letter to The Telegraph that we need not worry about Climate Change, since the last time the climate changed it gave rise to civilisation. The scientist whose research she claimed to be referencing denounced this, saying she had grossly misrepresented his work.